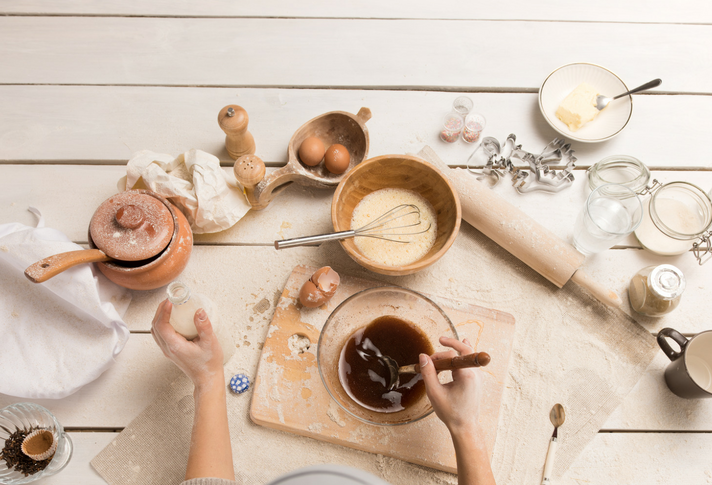 Today’s talented performers dream of winning American Idol or other TV competitions, knowing that success will follow. In 1966, when a woman won the 17th Pillsbury Bake-Off with her recipe for a cake baked in a Nordic Ware Bundt® pan, Pillsbury and Nordic Ware were overwhelmed by the unexpected response. Demand for the baking pans soared. Pillsbury launched a line of Bundt® cake mixes, licensing the name from Nordic Ware, which later introduced its own line of Bundt® cake mixes. And the rest, as they say, is history. Even at the Smithsonian Museum of American History!

In 1946, with $500 and a good idea, David Dalquist and his wife Dottie started a bakeware business in the basement of their Minnesota home. Their first products, such as The Rosette Iron, Ebelskiver Pan, Krumkake Iron and the Platte Panna Pan, were inspired by the traditions of the area’s Scandinavian and German communities. In 1948, the Dalquists purchased Northland Aluminum Products and combined the product lines, trademarking Nordic Ware as the name of their new company.

These ethnic groups provided company’s labor force and product ideas. In an early example of crowdsourcing, in 1950 the Minneapolis Chapter of the Hadassah Society asked the Dalquists to produce a kugelhof pan, similar to the one the society’s president had received from her grandmother in Germany. Dave produced the pan from cast aluminum for the Hadassah Society and some for the Nordic Ware brand, which he sold to department stores using the name bund pan. The word bund means a gathering—thus a bund cake, with its characteristic fluting, was meant for an event or celebration. Nordic Ware filed for a trademark to protect its creation, renaming it the Bundt® pan.

Today nearly 60 million Bundt® pans are used in American kitchens. The popular baking molds enjoy guest spots on TV cooking shows and frequently appear in magazines and cookbooks. The original Rosette Iron, Ebelskiver pan and Krumkake iron remain in the company’s offerings. No longer considered “ethnic” but specialty items, the tools are now used by a new generation of cooks eager to develop their skills and create gourmet comfort food.

In response to the microwave oven’s impact on American cooking in the 1970s, Nordic Ware introduced its patented Micro-Go-Round food rotator in 1978. Its innovative line of microwave cookware grew to more than 50 accessories, establishing the company as a trend leader in an emerging product category.

In 2007, the original cast aluminum Bundt® pan along with production molds and products from the early Scandinavian cookware line and the first microwave cookware products were invited to join the collection at the Smithsonian Museum of American History. These Nordic Ware products help the Museum document changes in how Americans prepared their foods in the second half of the 20th century as well as address themes of invention and entrepreneurship.

Making long-lasting products that withstand years of use are a key approach to sustainability. And Nordic Ware’s green business practices are all about local first. Keeping production local, by creating and maintaining jobs in its Minneapolis community, also allows the company to monitor use of materials and other resources to assure economical production and quality products.

The company limits waste by purchasing steel and aluminum in the most efficient widths and gauges to produce the smallest amount of scrap during manufacturing and recycles trimmings and damaged castings. Formulas for coatings and finishes contain no heavy metals and most clean up with water, reducing solvent use. Factory processing is powered by clean natural gas, which heats and re-circulates water, and heating systems are industrial washers operate at high-efficiency.  Packaging is designed to use recycled and minimal raw material, and many tons of paper, corrugate are recycled. Instead of disposing in landfills, Nordic Ware sends rags, used oils and absorbents offsite for energy recovery through incineration. Nordic Ware believes that the U.S. infrastructure assures the environmental impact of manufacturing is significantly less here than overseas.

Back to the Classics

Celebrating 65 years of American-made traditions, Nordic Ware reintroduced the 1975 Bundt-lette® Pan, a six-cavity pan now coated with non-stick. Good design and good management stand the test of time at Nordic Ware. Proud to continue in the U.S. when many of its competitors moved production offshore, the family-owned and operated company expanded its Minnesota manufacturing facility in 2009.

Visit www.nordicware.com to learn more about the company and its products. Join in the anniversary fun with the photo and recipe contests and history hunt while you explore new baking and cooking techniques.