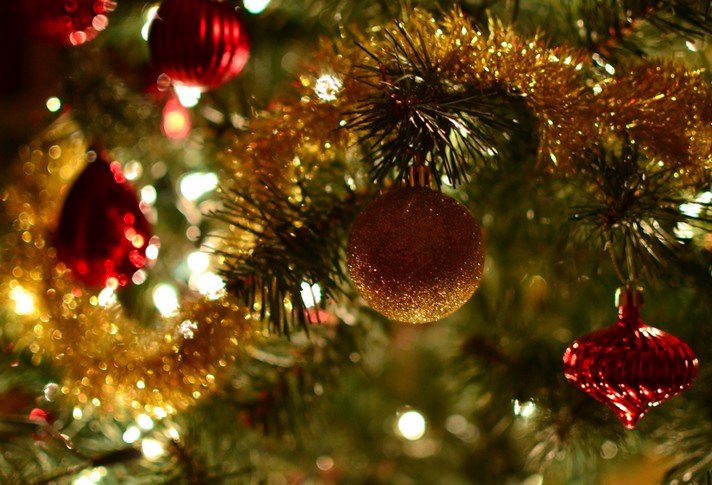 Ah, December….The biggest shopping month of the year. The race begins with a stampede on a Friday, the day after Thanksgiving known as Black Friday, as shoppers are surrounded by twinkling colorful lights and the jingling sound tracks that echo in our heads as we dash between parking lots. Did you know that retailers have created many of our holiday traditions?

During the 1930s Depression, retailers inspired desire and became dream makers. To draw people into the stores, merchants created new sales techniques such as special events and exhibits and targeted Christmas as the all-important merchandising season. Sears, Roebuck and Co., American’s most powerful retailer, mailed its first “wish book” catalog in 1933. In 1939, as a way to prolong the Christmas shopping season, retailers persuaded President Franklin D. Roosevelt to change the date of

Thanksgiving from the last to the fourth Thursday of November. That same year, “Rudolph the Red-Nosed Reindeer” entered popular culture as a Montgomery Ward Christmas promotion. Each year, Ward (Sears’ main competitor) gave away millions of the charming story; Rudolph was set to music in 1949.

In the 1930s, jewelry stores sold not only diamond rings but a variety of quality goods for upscale gifts: silverware, radios, cameras, typewriters, cigarette lighters, clocks, dresser sets, radios and electrical appliances. The 13 years of liquor Prohibition (thankfully!!) ended in 1933, and in 1937, for 25 cents down and 50 cents weekly, the $12.75 Cocktail Set featured in this jeweler’s catalog could be yours.

Not only a fantasyland for children making their lists to send to Santa, the Sears Wish Book was filled with practical gifts for adults as well—from gloves and pajamas to TVs and kitchenware. Sears staff designers created countless new items annually and collaborated with manufacturers on private label goods. Here are few views from Sears’ 1972 book of dreams. 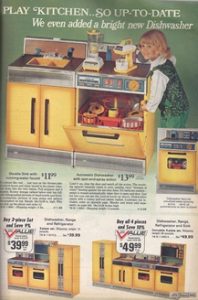 Educating the next generation of cooks, kids’ kitchen sets featured miniature versions of common appliances like mixers and blenders—just like Mom’s. 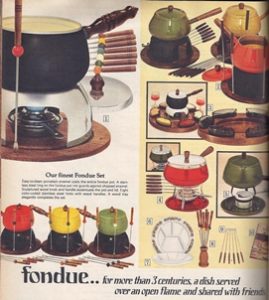 General Electric introduced the first electric knife at the Housewares Show in 1963, and in 1972 it was still a popular gift item for men. 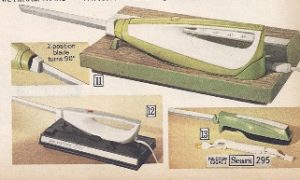 Philadelphia is credited with naming Black Friday as an indication of the city police department’s displeasure at the traffic jams created as shoppers flooded into the central city to the department stores. By the 1980s, an alternative interpretation emerged—of the day’s importance to retailers finally turning a profit in black ink after 11 months of red ink losses. Whatever the definition, the day’s frenzy now extends into Thanksgiving Thursday and beyond with Cyber Monday as retailers entice shoppers with special deals. Savvy shoppers plan their paths strategically with electronic lists, mobile apps and QR code readers in hand to navigate the best choices.

Ho! Ho! Ho! Merry Shopping to All! Wishing you many housewares products under your Christmas trees!