Every year, the International Housewares Association (IHA) welcomes retailers deemed the best in their country to Chicago, where they compete on a global stage for the coveted Global Innovation Awards (gia). This year, one of the outstanding gia Global Honorees was NK Glas, Porslin & Kök of Sweden – a homewares store within the famed NK (Nordic Company) Stockholm department store. Michelle Hespe reports. 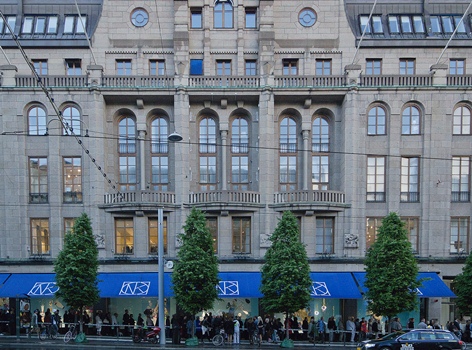 Jörgen Eriksson, CEO of NK Glas, Porslin & Kök shakes his head and smiles. “At first, we thought we were going to win, because we were so sure of ourselves, and our product…our store. But then, we met with the gia judges, and we began to push our case and tell them about us, and make them understand why we should win, and they said to us – ‘we have already made our decision.’” He laughs and grimaces slightly. “I thought that meant we had not won, and I am not a very good loser!”

“So we went along to the gia dinner, thinking it would be a great night anyway, and we’d drink and eat and all that time, I was thinking, ‘we have not won’. He smiles and spreads his arms. “But then, they called our name, and we were shocked! Wow! We were so excited and so proud! I walked to the stage remembering when I left everyone at the store to come to Chicago, and I said to them – ‘I will bring the award back to you all!’”

And that is exactly what Eriksson did, and more, taking home two prestigious awards that evening. He went to the stage in the Grand Ballroom at the Four Seasons Hotel in downtown Chicago, and accepted one of five gia Global Honoree Awards on behalf of NK Glas, Porslin & Kök, and all of the staff that worked so hard to make the store a success story. It was a happy retail family indeed when he carried that award back to Scandinavia for all to see. “I kept my word!” he said. Eriksson’s second win of the evening was the Martin M. Pegler Award for Excellence in Visual Merchandising – the perfect capstone to an already successful event!

Since the store opened in 2005, it has undergone enormous restructure under the watchful eye of Eriksson, who took on the role of CEO five years ago. Since he kicked off his dream of making the store one of the best, most fashionable homewares stores in Europe, sales have increased by 33 percent, and the age of the average customer has been reduced from 55 to 35. This is a crucial element of the store’s success, because it is now aimed squarely at a generation who spend more money on high-end fashion and stylish homewares. The spend for each customer has also increased – by a staggering 265 percent. The store has gone from nearly going bankrupt to turning a profit.

As Eriksson explained to the judges in the store’s gia evaluation forms, NK Glas, Porslin & Kök’s target market ‘creates an identity and celebrates life primarily through its choice of clothes, shoes and cosmetics…through high fashion and/or trend.’ Eriksson and his staff believe that accessories for the home should be equally as important for this demographic.

The new layout of the store reflects this approach of homewares uniting with fashion. For instance, sales tags are no longer seen, having been replaced with regular pricing, automatically taking the bargain element of the store away, and where there were once many shelves and stacked products, there are now long, narrow podiums for products. “Like catwalks, you could say,” says Eriksson.

Fashion is also incorporated into the way that the store markets its choice of high-end products. “Working with international photographers and stylists clearly conveys everything we do as a company,” said Eriksson in their gia entry. “Vogue can show fashion on the moon, while we can display glass sculptures underwater… Just as you change your clothes or get a new hairstyle, you should also consider the manner in which you mix colors and designs in your home.”

The store’s staff are a major draw card for customers – they walk the walk and talk the talk, and with practically zero staff turnover, they are also incredibly knowledgeable, claiming their own niche within the business, continually learning and improving on their sector.

Eriksson prides himself on recruiting highly passionate people who believe in the products they sell, and they are in turn treated like the stars of the show. “We’re all about making our staff feel really special, because when they are happy and feeling great, they shine,” says Eriksson. “And our staff are very involved in everything we do – it’s like their hobby to go to work. They all got involved in our gia application.”

Reflecting his love for fashion and his appreciation of his staff, Eriksson recently hired a photographer to come into the store, and each staff member was able to spend time with them, posing and having fun. “It made them feel really good – like a star – that’s what we like to do for our people,” he says.

Above the counter, charming photos of the staff in various poses also show their personalities and love of fashion and design. Eriksson asked his staff, after having their photo taken, to write in one sentence what they hoped their picture would say to customers. It was a fun, interactive and personal approach demonstrating the importance of customer and staff relations within this business, and also a clever approach to learning something about the 35 staff members and their feelings about themselves and the place in which they work.

Eriksson said that entering gia taught him and his staff a lot about their business and the way they operated, because they had to look at every aspect of what they did, breaking everything down and analyzing it all.

“We worked really hard to renew this branch of NK Stockholm,” he said. “We’re very proud of what we we’ve done. Six years ago the company hired me as the CEO, and I had a strong dream of what I would make of it. This win reflects what we have all done together since then, and filling out the forms to enter this competition gave us the time to reflect on everything we have achieved and made us think of everything else we can do.” He pauses and laughs. “Now I need a new challenge!”

Eriksson says that he’s also learned a lot from friendly Americans while spending time in Chicago, especially about service. “I learned that we can really improve on our service,” he says. “In Scandinavia, people are very nice, but they are not like the people in the US. Here, they say things such as – “How can I help you today?” That’s very nice to hear. It makes you feel really good because they seem to really want to help you, and you stop and you think, yes, you can actually help me today!”

It’s certainly the injection of Eriksson’s experience, personality and ambition that made NK Glas, Porslin & Kök shoot to the top of the pack and become a global honoree at gia 2012, but it was Joseph Sacks, AB, the founder of the Nordic Company in 1902, who planted a seed of inspiration that has since continued to grow.

“Sacks once famously said that “NK should be a commercial theater” and this has become the catchphrase of the modern enterprise,” says Eriksson. “All signs take their design inspiration from the international fashion industry. This philosophy can also enhance traditional and everyday glassware, china and kitchen utensils, making them, in turn, more fun, more enticing and more functional.”

Reflecting on the store’s win, Eriksson says, “I think one of the things that makes us stand out is the consistency of what we do. We’re all about fashion for the home, and we never do things by halves. We have gone the whole way and we are very proud of that.”

For more information about the gia (Global Innovation Award) program, the co-sponsors, or participating in 2012-2013, contact Piritta Törrö at piritta.torro@inspiredconnection.fi. Additional information on the gia program is also available online at www.housewares.org/gia.

For more information about the International Home + Housewares Show and to pre-register for the 2013 Show, taking place in Chicago on March 2-5, 2013, please visit www.housewares.org.