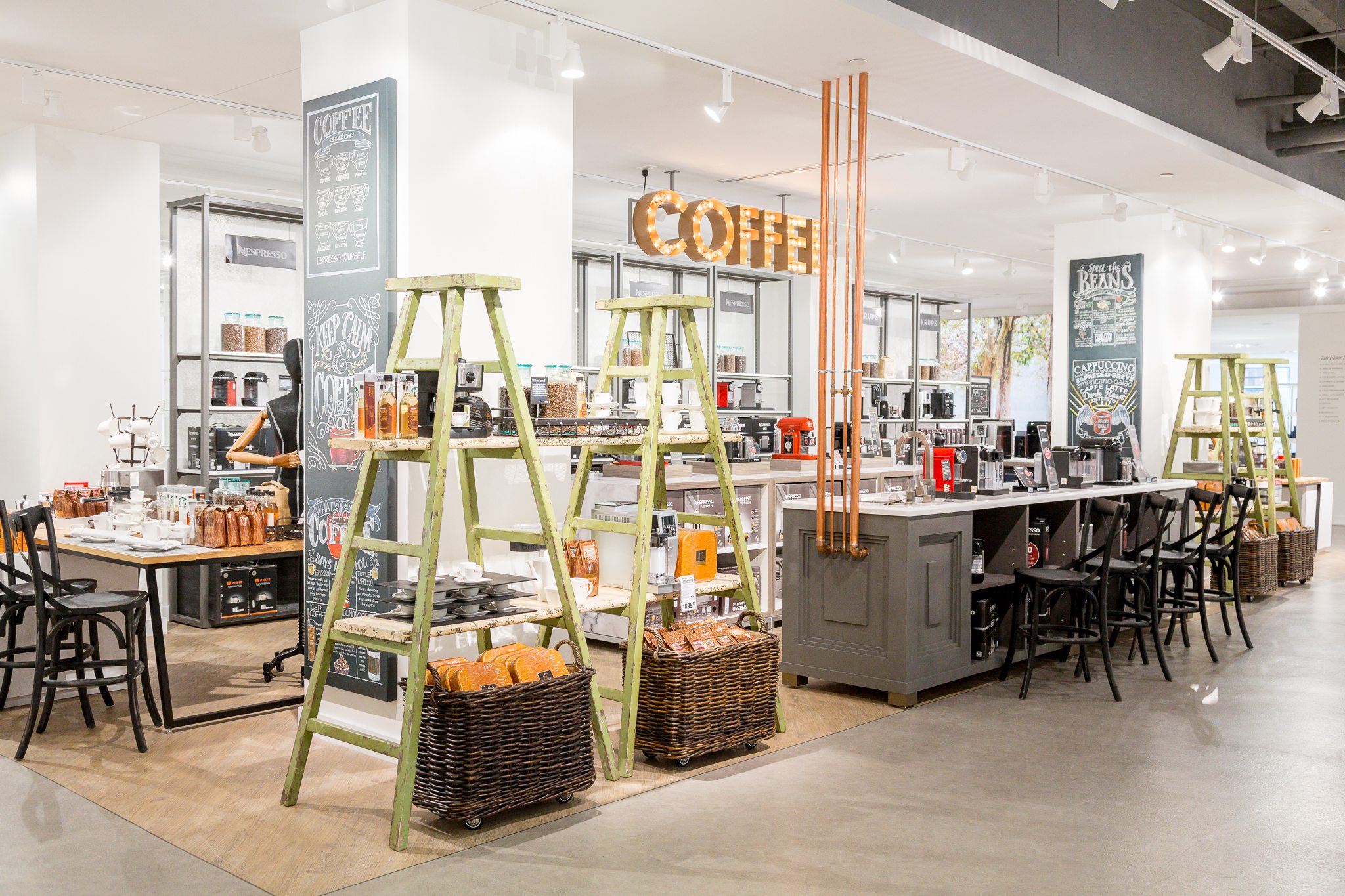 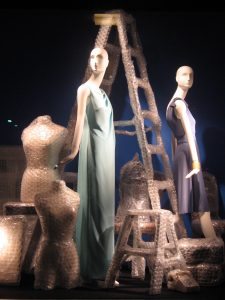 Ladders in retail displays… Step right up! That is what ladders are for. Not only do they make it possible for you to access something that may be out of reach, they also allow you to go from one level to the next with assurance of new views at each level.

Think about it for a moment! How many different types of ladders do you already have in your store? You may have the single unit, which consists of two uprights connected by horizontals at regular levels, or maybe you have a step stool, which is a miniature ladder with only two or three steps or levels in all. Then there are the work-horse ladders that fold away and can go from five or six feet in height to maybe even taller. Now, these ladders may be tired looking, paint splattered or just weary from use, but that does not diminish their application as a window or interior prop for displaying an assortment of products where each item, pattern or coordinated cluster gets to be viewed on its own level. And getting a few new ones of assorted heights would not be a bank-breaking deal!

What makes ladders in retail displays such great props is their  ability to showcase a variety of items on a single device, allowing you to separate yet organize the merchandise and bring the items closer to the viewer’s eyesight. Let us assume you have dishes to show. On the lowest step, collected over to the right side, you can show a cluster of red dishes—plates, cup and saucer resting on a red fabric napkin that is draped over the ladder step. On the next step up and over to the left, set an orange napkin and a sampling of the orange dishes. Next step up—centered on the step—the yellow collection and so on, until you have shown the rainbow collection.

For Valentine’s Day, you’ll want to show off all of your red products from dishes to tableware, to cookware, coffee makers and so on, with each product represented on a separate step. In this case you might want to spray the stepladder red as well. For Christmas you might spray the ladder white and flock it with artificial snow and trim it with snowflakes and icicles or wrap it with garlands of seasonal greenery. 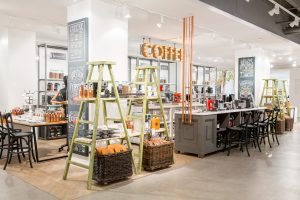 Be playful—let your imagination soar. Wouldn’t a green ladder trimmed with daisies announce you have a new springtime showing? A pastel colored ladder will enhance an Easter event. How about using a collection of assorted-sized ladders to fill a large window or a single ladder—as a follow through theme—for a series of small windows using ladders in retail displays?

Think vertically instead of horizontally! Think of displaying your products in relation to the person on the street. Bring your items up to their eye-line. However, it is possible to display both vertically and horizontally with ladders. Inside the store, create a shop-within-the-shop by using a pair of stepladders with shelves set between them resting on each step or alternate steps—depending upon the size and height of the items. The same approach can work in windows for heavy promotional displays.

Don’t ignore your regular ladders—the ones that usually have to lean against a wall because they cannot stand upright on their own. If you use them as window props be sure to secure the part that leans against the wall so that the ladder is secure and won’t be affected by the passing traffic.

As with all good props and fixtures—give them frequent rests away from the public. Do not use them over and over again without refreshing, renewing and reconditioning them. Paint and appliqués will do the job and usually at a minimal cost. Be clever—use your imagination—have fun and STEP UP with ladders!