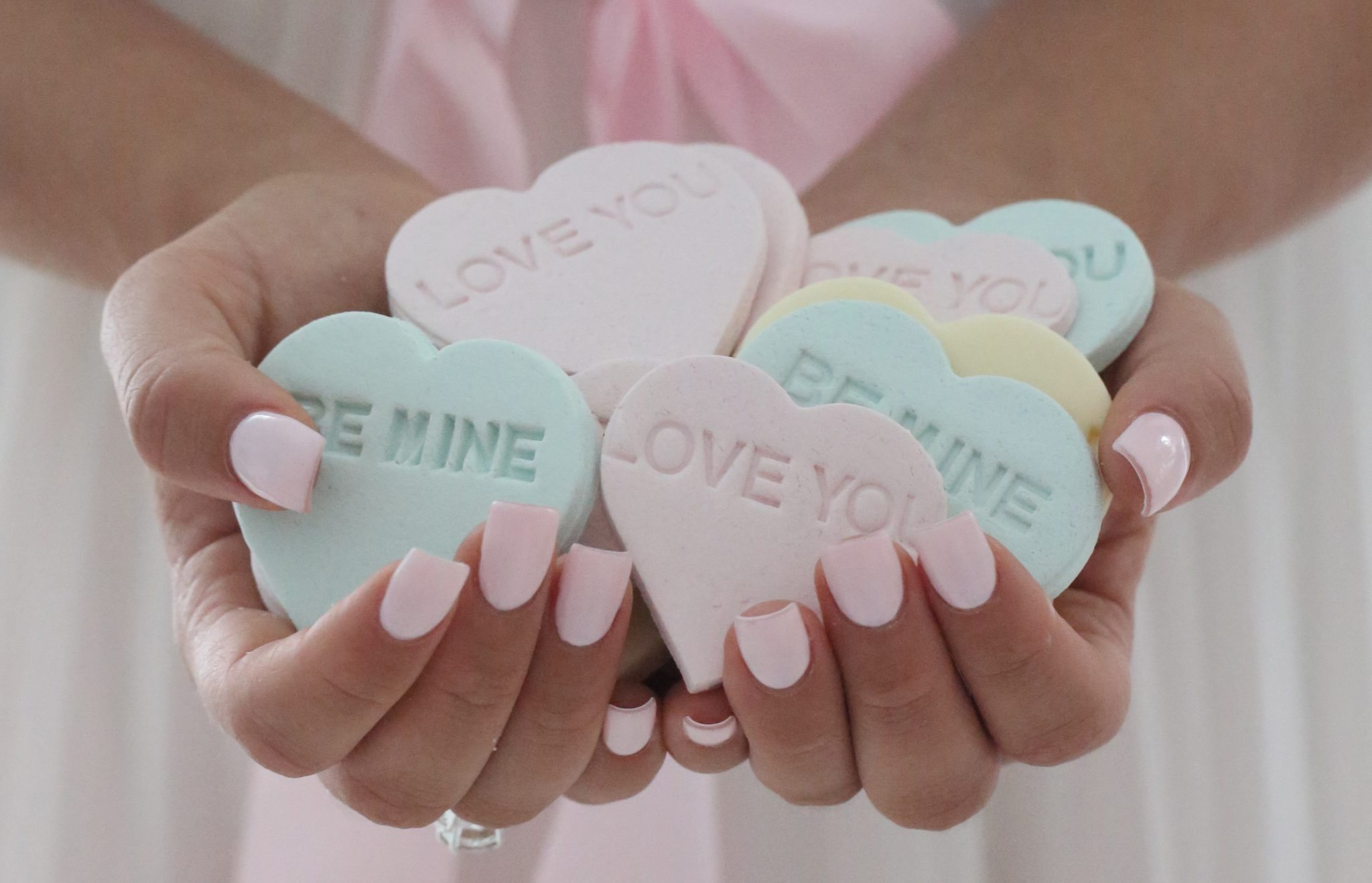 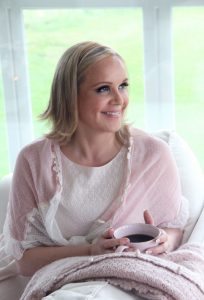 Baking makes a home feel cozy and safe, producing a caring atmosphere full of love and nurturing. Because baking makes those who bake happy and those around them grateful, Manuela Kjeilen started baking more. It was her life’s passion, although at first she didn’t know it. Manuela baked because she wanted to give something – everything – to her family. And when that family she’d created started to fall apart, she baked more, to make sure everyone had a safe place filled with love to come home to.

“Do you know my real story?” Manuela asks me. I didn’t, and so our chat began.

Manuela’s parents divorced before she turned 16 and she was forced to drop out of school and move to be with her brother in the U.S. A year later, when her mother moved from the Netherlands to Norway, she moved to be with her.

“I was only 18 when I married, and then I had my first child while I was still so young. I didn’t adjust well,” she says. “I also had dyslexia. So when I married, I had no education and I became a mom and a housewife. I love being a mom. It made me so happy.”

Soon she had five children. Being a mother while taking care of the home seemed to be what Manuela was cut out for and she was content. Her husband was working and they had a very comfortable life. But then something terrible happened and her simple, lovely life disappeared. 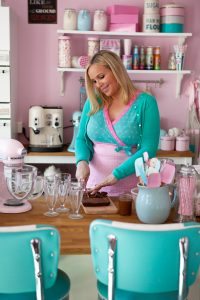 Five years ago, Manuela’s husband Aso had a stroke. “We lost almost everything,” she says. “Our life fell apart in so many ways. For me, it was most difficult because my husband had a dream, working in healthcare. He had set up a successful business with many employees, and every day I saw his eyes light up while talking about his work because it was something he believed in. So for me, the worst thing was seeing his dream – everything he had always believed would happen – fall away from him.”

Manuela’s husband became so sick that they lost the business, their income dropped dramatically and it was hard for them to survive, supporting their children while paying medical expenses.

“Then I saw the children going through it all as well – things were even hard for them,” Manuela says. So she did what she knew so well – she baked and baked and baked.

“I started baking more than usual, so when the children came home from school they didn’t come home to a place that was filled with illness. They came home to their mommy baking beautiful, yummy things,” she explains. “Everything seemed normal for them when I was baking. Everything felt like it is going to be okay.”

But everything wasn’t okay, as they had run out of money. However, Manuela had just joined Facebook and posted a photo of her cupcakes on her Facebook page, prompting a friend to say, “Manuela, your cupcakes are amazing! You need to start a blog.” 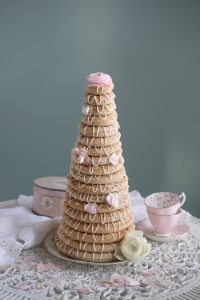 Manuela didn’t know what a blog was and started checking out popular blogs by women. Discovering they were mainly about young successful women showing off their bodies and how great they looked, she said to her husband, “Well, that isn’t going to work!”

Manuela Kjeilen then thought about the one person who had always inspired her – Oprah Winfrey. Each night after her children were in bed, she’d watch Oprah shows that she’d recorded during the day. One was about finding your passion. When Manuela’s husband encouraged her to think of a domain name, she remembered Oprah’s show about following your passion. “The first name that came into my head was Passion For Baking!” she shouts excitedly.

As she started her blog, a friend corrected her spelling and helped her with posts, she asked her growing fan-base of followers what to do and she visited neighbors, proposing that if they brought eggs and flour she could bake something for them to feature on her blog.

“Oprah said you never have to tell people when your life is going badly. You just say that you are temporarily out of cash,” Manuela says, ever guided by her idol. She visited stores in the small town nearby and asked if she could borrow things such as bakeware and pretty pieces of décor to make the setting for her blog look lovely, and everyone she approached was happy to help.

There were many small triumphs, tears and obstacles, but things moved quickly. On March 8, 2010 (International Woman’s Day) Manuela started her blog, and exactly one year later, in 2011, she was voted as Norway’s most beloved blogger. The prize was a trip for two to New York, and from there doors began to swing wide open.

Manuela was offered a book deal in Sweden, which she turned down because it didn’t feel right, and a few months later was offered one in Norway, which she accepted. Her first book was called Love, Manuela, and Norway is still her biggest selling region. She has published eight books, and her TV show, Manuela’s Sweet Temptations, airs this fall in Sweden. A TV producer told her she reminded him of Nigella Lawson. 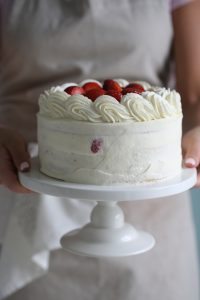 It was the new Manuela Kjeilen. Deals started rolling in and her face was popping up everywhere in Norway. A range of cake and cupcake mixes called Manuela’s Cake Mix Series was released by one of Norway’s largest food production companies, Norges Møllene (Møllerens), and an Edible Soft Pearl cake decoration series was developed in her name with the popular Dr. Oetker company.

Suddenly Manuela Kjeilen was a famous baker. Her Instagram followers skyrocketed (today she has 1.3 million followers) and that led to another opportunity in the Middle East. “I didn’t even know I had fans in the Middle East!” she says.

Manuela was visiting Abu Dhabi with her friend who has a fashion line. When they touched down, she received an email from a woman in IKEA’s publicity team informing her that a new IKEA store was opening in Abu Dhabi. She asked Manuela if she’d like to attend the opening and decorate some cupcakes at the front of the store, and inform her followers (about 230,000 at the time) of her upcoming appearance. Manuela accepted, snapped a photo of the store, then let her followers know that she’d be there. A few hundred people turned up to see her at work, but one person in particular sent Manuela’s life in another new direction.

A young woman approached Manuela and said that a friend, Shaikha Salama, was a big fan of hers on Instragram and could she please visit her? Not understanding yet ever-polite, Manuela explained that she was flying home the next day and couldn’t fit that in. However, Manuela’s friend had caught the name of the young woman and in Norwegian said, “Her friend is a princess. She wants you to go to the palace.” 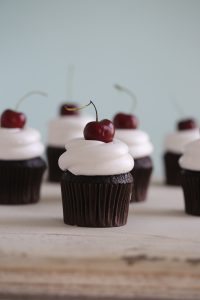 Manuela changed her plans and stayed in Abu Dhabi for another few days. She visited the palace and Sheikha Salama asked if she could train the royal family’s pastry chefs. “Everyone who works for the royal family has Cordon Blue training or something similar, and they wanted me, a house mom – to train their staff!”

Manuela was stunned, but one thing led to another and now she trains pastry chefs for other members of the royal family. It’s another one of the incredible opportunities that Manuela Kjeilen thanks creative visualization and Oprah for. “If you believe in things enough, work hard and imagine them, they happen,” she says. “Oprah taught me that.”

Success aside, Manuela’s goal in life is to inspire people. “Even if you don’t have the education or the money to follow your dream, you can do it – just never give up hope,” she says. “I want to be remembered as someone who had a passion and who didn’t know it, until I was 43. And then I just followed that passion, and I never gave up. There are so many women out there with no education, like me. I want them to know that their dreams can come true as well. I always say, ‘If I can do it, so does everyone’.”

Some people give up when hard times hit them, while others turn tough situations into opportunities. It’s these kind of people who are an inspiration to others because they are hope personified. That’s Manuela Kjeilen. And recently, another dream of this lovely Swedish mother and wonderful baker came true. She met Oprah. With the passion in her eyes that now defines her, she said to her idol: “You are my inspiration. Thank you for giving me the tools to survive in life.”

Visit Manuela Kjeilen at her blog, Passion for Baking, at www.passionforbaking.com.