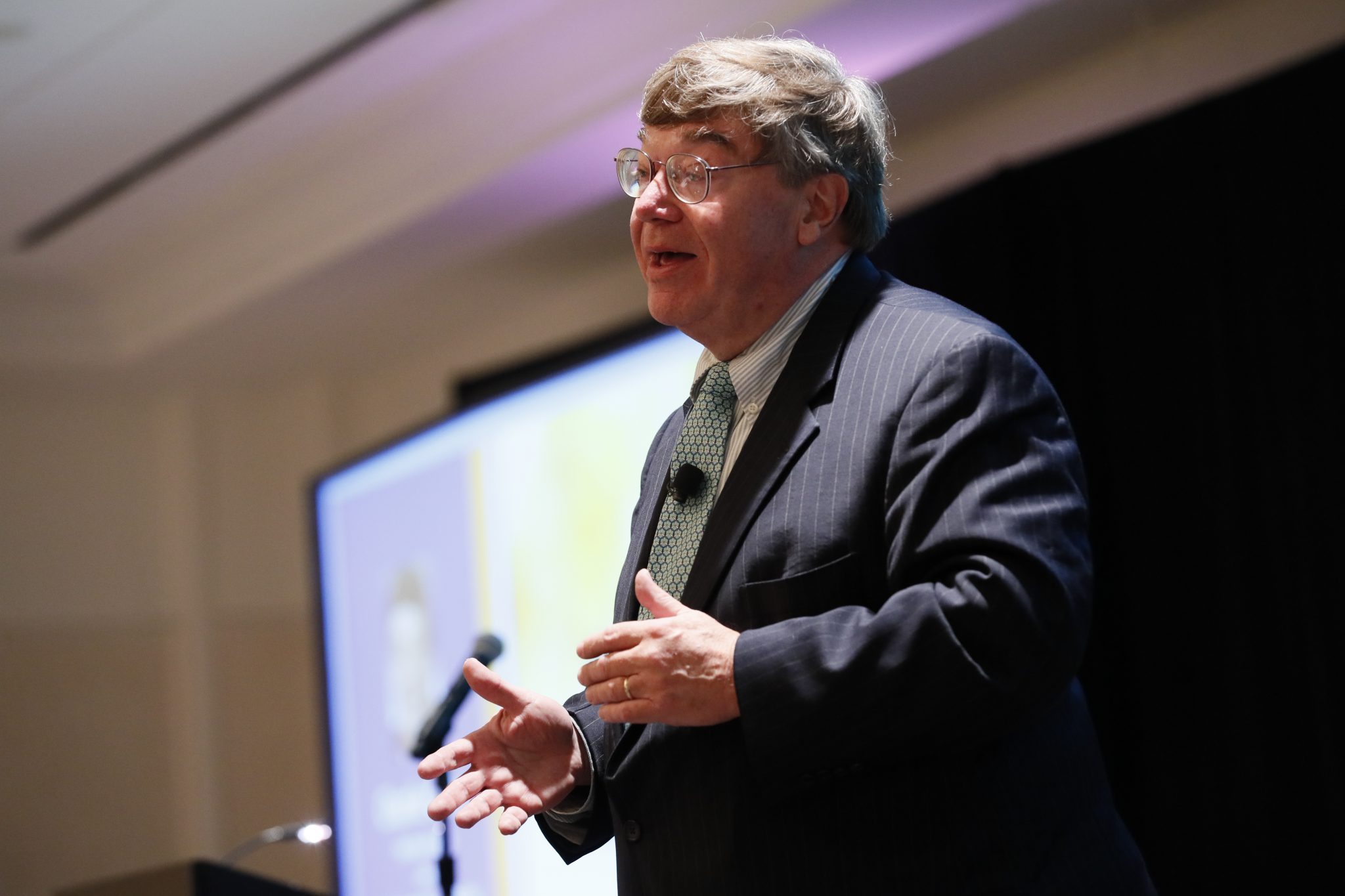 In this tumultuous election year, many people in the U.S. and abroad and asking that very same question. Political analyst and commentator Charlie Cook provided some answers to the CHESS audience. He also offered his perspective on the national political scene, for the coming month is sure to bring surprises and upsets with changes in leadership nationally and in all 50 states.

Considered one of the nation’s leading authorities on American politics and U.S. elections, Charlie Cook is editor and publisher of The Cook Political Report, which he founded in 1984. The Report is an independent, non-partisan newsletter that analyzes elections and campaigns for the U.S. House of Representatives, U.S. Senate, governors and President as well as American political trends. Among the subscribers to The Cook Political Report are lobbyists, trade associations, corporations, labor unions, Members of Congress, political action committees and interest groups across the political spectrum. Cook is also a columnist for the National Journal magazine, for which he writes a twice-weekly column.

Cook greeted the audience by saying, “It’s a cliché to say that this is the weirdest election we’ve ever seen. When the world works the way we have been used to it working, we can have some basic expectations. Now we are in uncharted territory and water is swirling counterclockwise. It’s a very odd year.”

Cook began his career as a political observer working for legislators in his native Louisiana. His witty commentary was spiced with bayou humor. He began by outlining the societal factors that have brought the populace and political parties to the situations we see today.

In order to put some context into the U.S. presidential race, he stated that the two candidates are moving in what might be termed “a narrow trading range” of 3-5 points, with a high floor and low ceiling of variability. When one blunders, the other candidate can move up a few points but then the direction reverts. With the polls announcing daily who is ahead or behind, we have to beware of the cardinal sins of polling. It’s a natural tendency to choose to look at what we would like to happen and see other points of view as flawed. Don’t obsess over what the latest poll says. No matter what it says, it’s best to look at the averages. Sites like Real Clear Politics.com does an average of polls and looks at favorable and unfavorable averages in 16 key states. Pollster.com and Huffington.com offer alternative points of view. National polls worth looking at are ABC, CNN, FOX, Pew, New York Times. Stick with the averages.

If somebody had said two years ago that Hillary will get the Democratic nomination, it would have been no surprise. But if someone had said she’d have a tough fight from Bernie Sanders, no one would have believed it. The Democrats went on unexpected detour, but still chose what we expected.

Two years ago with the Republican Party’s exhaustive list of candidates, the odds for who Republicans would normally nominate fell into a pattern.  With the exception of Barry Goldwater, post –WWII the candidates have been a sitting president, vice president, runners up in previous elections, the son of a former president or the commanding general of a war. Typically Republicans nominated someone within their comfort zone and familiarity zone. They were not early adapters, but stodgy.  The first sign that something was different was in the summer of 2011, at the first major event for the nomination process, the Iowa straw poll. Republican activists come to the Iowa State campus for a party and listen to speeches. Congresswoman Michelle Bachmann of Minnesota won and jumped up to lead national polls. She was the front runner for a few weeks, then Rick Perry, Herman Cain, Rick Santorum, Newt Gingrich and Rand Paul joined in–none of these people fit into these categories. After these candidates were seen as flawed, Republicans finally reluctantly nominated Mitt Romney. Clearly, some Republicans wanted to do something different, and something had changed along the way but the nomination went back to the predictable. 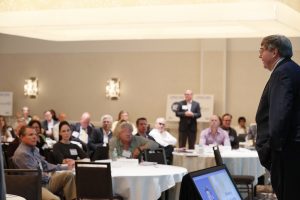 What’s building that causes the parties to detour?

The Democratic party of the 1960s to early 1980s included conservatives from the south and rural America. Elected officials came from those states. The Party also included the same number of liberals from New England, and the Midwest—liberal Republicans like Charles Percy in Illinois and George Aiken in Vermont. Liberal Republicans and moderates in both parties were active and influential ballast for both parties to keep on balance.

In the earlier decades, we had three broadcast networks and many news magazines. Everybody got their news from the same sources. They had the same set of facts and then made their own opinions. Now media has a different meaning. We have talk radio which is 99% conservative, along with Fox, MSNBC, liberal websites and social media. Increasingly when voters think of trusted news sources, they choose their media sources to reinforce their existing positions. We have ideological silos on left and right predisposed to extreme positions.

Consider if we had a race with Hillary Clinton vs Jeb Bush. When her husband was President, she was at the left end of the spectrum. Now she is scrambling to keep up with her Party to her left because the center of gravity in the Democratic Party is closer to Bernie Sanders and Elizabeth Warren, rather than with Joe Biden or Hillary Clinton.

In 1998-2006 when Jeb Bush was governor of Florida, he was considered a conservative. Now he discovers he’s at the left of the Republican Party. He didn’t change, but the Party moved out from under him.

What Contributed to These Ideological Changes?

Let’s look at the economic sources of anxiety in two main groups:

In the middle of the 20th century, a person could choose to not go to college and could still make a nice living—and have a fishing boat and hunting camp lifestyle. Those jobs with those wages went away.  Part of that is because of globalization and trade but also because of automation. Trade is taking a lot of the blame, but productivity is also a factor. Production is much more efficient and fewer people are needed. This group of people drew the short end of the stick to not go to college and this decision makes them pay a high price.

In the past, the non-college educated white males did well. In last 50-70 years, women have gained opportunities they didn’t have before, and the same is true with minorities.  These white males see others doing well, and they are angry and looking to blame someone. They want to explode. Trump’s appeal with white college-educated men is under performing Romney’s return and Trump is over-performing with non-college educated men. We’ve never seen this division before.

2. The second group of the disaffected is composed of young people who graduated from higher education since 2008. They graduated into the worst financial crisis, deepest recession, deepest downturn and slowest recovery since the 1930s. They came out of college with job prospects unlike what older brothers and sisters, parents and grandparents experienced. You’d have to go back to their great-grandparents to find such a tough generation. Plus these 30-year-olds are buried in student loan debt. Student loan debt is higher now than credit card debt. Very few of these college graduates went on to get the job they prepared for. So an old guy who says “free college” sounds good to those who have been dealt a wrong hand. This also contributed to the phenomenon of Bernie Sanders and Donald Trump.

Anger at the Political Process

At a focus group in the winter in New Hampshire, the moderator asked people what they would ask the next president. One woman said, “All I want is for my family is to have what unwed mothers and illegal aliens get.”  Where did she get the idea that illegal aliens get free tuition and poor unwed mothers have so many benefits?  If people are struggling and if they believe such things, they will be angry about things that are not true.

In the summer of 2015, I spoke to a Tea Party supporter, a smart electrical engineer, who said Ben Carson and Trump are doing well because recent presidents have made such a mess. Bush, Clinton, Obama, Congress, it was a blanket indictment of the whole system. How could they do any worse? Why do people think this way? Look at the other countries of the world. Not one other country is doing better.  Things could be MUCH worse, but the general feeling is that things are very bad. Consumer confidence is not low, but when asked in a political context people will say they are pessimistic. These are major contradictions. On the Democratic side, negative feelings move people to say that the Democratic Party has been taken over by the big banks and Wall Street (the banks certainly don’t think so) and on the Republican side, voters feel that their leadership sold them out.

CBS polls during the primaries season revealed that in New Hampshire and South Carolina voters said overwhelmingly that Congress compromised with Obama too much. In fact, we haven’t seen anybody compromising, so nothing happens. Yet the perception is that party leadership sold them down the river. There is so much anger that Jeb Bush could have had more money and different name and it wouldn’t have made a difference—no one in the establishment would have gotten the nomination, the voters wanted to go outside the Party. Even Ted Cruz said that the nomination will go to the angriest outsider.

I look at swing voters a lot. These voters look at Hillary and they tend to see someone smart, knowledgeable, experienced, but they don’t like her or trust her. In a normal election cycle, 32 days before an election if 43% of voters have favorable and 53% have unfavorable ratings, this -10 difference would mean that she would lose.

BUT in the binary choice, we are presented with, swing voters look at Trump and love that he’s not a politician. But he’s also an unscripted guided missile. Does he have the temperament, maturity, personality to work?  Does he does know the basics of what is needed to be President of the United States? His unfavorable ratings are so great it is highly unlikely he could win.

Additionally, Clinton has these advantages:

Prediction on Congress: House will stay Republican, Senate will be an even split 50/50 give or take one or two seats.

Charlie Cook took questions from the audience on expectations for the U.S. economy under a Clinton or Trump presidency. While he is not a fan of the current president, he believes that Clinton is more moderate than Obama and that she is pragmatic and predictable. The business community favors stability. Other questions related to possible Supreme Court candidates, local races in specific states, potential changes to the Affordable Care Act, the net effect of candidate’s performances in public debates and the future of ideological media.