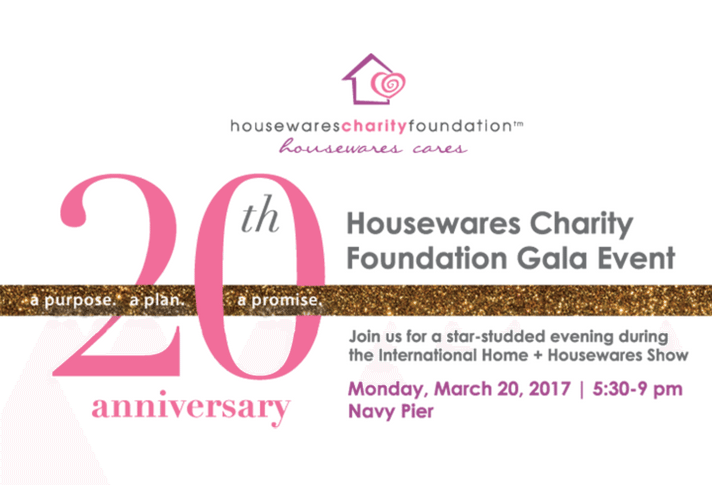 The Housewares Charity Foundation (HCF) will celebrate 20 years of raising funds for designated charities and uniting the housewares industry during its annual gala on Monday, March 20 during the 2017 International Home + Housewares Show in Chicago. This year, three industry leaders will be honored for their philanthropic endeavors: Janet Hayes, president of Williams Sonoma, will receive the Lifetime Humanitarian Award; Richard L. Boynton, Jr., president of JURA Inc., will receive the Humanitarian of the Year Award; and Phil Brandl, president and chief executive officer of the International Housewares Association, will receive the Lifetime Leadership Award.

The Gala, which will be held at Navy Pier, will start 30 minutes earlier this year with a reception at 5:30 p.m. Proceeds will benefit the Breast Cancer Research Foundation (BCRF), the HCF’s legacy charity, and No Kid Hungry, a campaign by Share Our Strength which works to ensure that every child in the United States has access to healthy food where they live, where they learn and where they play. Since the first gala in 1998, HCF has raised more than $48 million and has been credited with donating more than $27 million to BCRF.

Co-chairs for the 2017 event are Peter Cameron, co-chairman of Lenox Corporation and Keith Jaffee, chairman of O2 Cool. In a collaborative effort among industry manufacturers, retailers and allied industry partners, the non-profit HCF hosts this annual event to raise funds for critical causes, unite the housewares industry and honor its leaders. Honorees are selected for their humanitarian efforts and exceptional leadership.

The 2017 theme, “A Purpose. A Plan. A Promise,” celebrates the philosophy and mission envisioned by the housewares executives who joined together to create the Housewares Charity Foundation in 1997. The star-studded evening will include auctions and entertainment, along with the honoree tributes. The Gala will begin with a cocktail reception featuring 8 tasting stations hosted by James Beard Foundation chefs, including Rick Bayless, Abraham Conlon, Rohini Dey, Stephanie Izard, Paul Virant, Lee Wolen, Erling Wu-Bower and Andrew Zimmerman. Dinner will feature a three-course meal designed by Tony Mantuano, chef/partner, Spiaggia Restaurant & Lounge.

Janet Hayes was named president of Williams Sonoma in 2013, responsible for merchandising, product development, inventory management, creative services, visual merchandising, brand finance and operations. She joined Williams-Sonoma, Inc. (WSI) in October 2007 as senior vice president/general merchandise manager, where she led the Pottery Barn Retail division and provided business leadership for product, visual merchandising and inventory management. She was promoted to executive vice president of Pottery Barn Kids and PBteen in 2008 and in 2010 was named president of Pottery Barn Kids and PBteen. Prior to joining WSI, Hayes accumulated more than 20 years’ experience in the retail industry, working with numerous high profile consumer brands including Macy’s and American Eagle Outfitters. During her tenure at Gap Inc., she helped launch the GapBody brand and while leading design and merchandising for Nike Inc.’s Sport Culture Collection, she grew year-over-year sales and profits for five consecutive years. Her past board service includes Oregon Partnership (2003-05), an organization striving to end alcohol and drug abuse and suicide among Oregon youth, Zoe Intimate Apparel (2000-01) and Sherman Retail Group.

Richard L. Boynton, Jr., joined JURA Inc., the leader in super premium coffee equipment, as general manager in April 2007 and was named president in January 2008. Before moving to JURA, he worked for LeCreuset from 2002 to 2007, becoming president of the high-end cookware and wine accessory manufacturer in January 2004. Prior to LeCreuset, Boynton worked for New Ground Resources in St. Louis from 1996 to 2002, serving as senior vice president, and from 1991 to 1996 for Sunbeam Corporation, serving as president of the household products division of Sunbeam-Oster from 1994 to 1996. Boynton began his career at Polaroid, rising from marketing representative to director of sales. He was a member of IHA’s board of directors from 2006 to 2012 and served as IHA Board Chairman in 2011-2012.

Phil Brandl has served as president of the International Housewares Association for 20 years. Shortly after taking helm of the industry’s association, Brandl met with several industry executives as a founding committee for a philanthropic initiative that would become the Housewares Charity Foundation. As the HCF grew, he took on additional responsibilities as legacy co-chair of the foundation. Brandl joined IHA in March 1994 as director, marketing & trade development, was named vice president of the Association in 1996 and president Feb. 1, 1997. Under his direction, the not-for-profit association offers its 1,700 member companies a wide range of services, including industry and government advocacy, export assistance, State-of-the-Industry reports, point-of-sale and consumer panel data through Housewares MarketWatch, executive management peer groups, a unique Web-based community at www.housewares.org, group buying discounts on business solutions services and a consumer-focused digital platform, The Inspired Home. IHA also owns and operates the housewares industry’s premier marketplace, the International Home + Housewares Show, held every March in Chicago. The Show attracts more than 62,000 attendees from around the globe and is the largest annual trade event held at Chicago’s McCormick Place Complex. It is the 14th largest trade show in the United States. Prior to joining IHA, Brandl was vice president of the National Association of Service Merchandising, a national trade association for distributors and manufacturers of general merchandise and health and beauty products. He also has 15 years’ experience in the retail sector, holding operations and merchandising management positions with Prange Way and Copps Department Stores.

BCRF was founded by Evelyn H. Lauder in 1993. Ms. Lauder, a champion for advancing the world’s most promising research to eradicate breast cancer, passed away in November 2012 in New York City.

For more information about the HCF, its honorees and its charities, please visit the HCF website or see the following video: