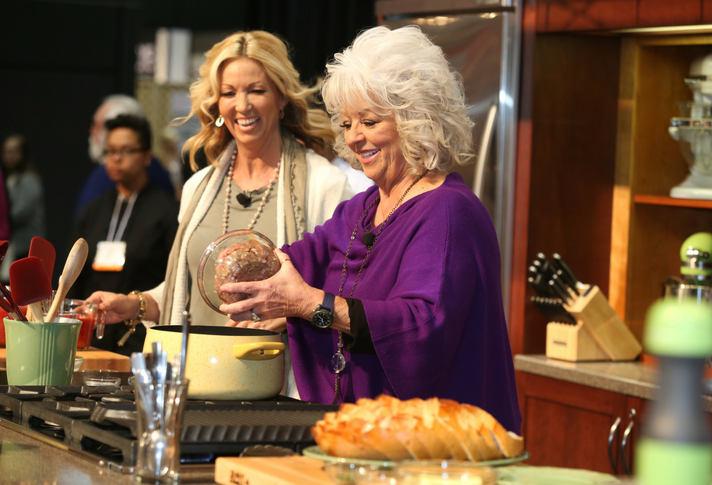 The chef demonstrations will begin at 10:30 a.m. on Saturday, March 18 and continue through Tuesday, March 21. During the four Show days, 22 national and local celebrity chefs will be demonstrating their culinary talents using products that can be found throughout the Show. The Cooking Theater, located in the Dine + Décor Expo in the South Building, is jointly sponsored by KitchenAid, Oneida®, Wilton and WellnessMats.

Tyler Florence has been a staple on the Food Network for more than 20 years, hosting numerous hit shows including current favorites “Comeback Kitchen,” “The Great Food Truck Race” and “Worst Cooks in America.” The author of 14 cookbooks, Florence also owns two restaurants and was named a James Beard Foundation semi-finalist in the Best Chef (West Coast) category in 2014 and 2015. Bernard Guillas is executive chef of the La Jolla Beach and Tennis Club, the Shores Restaurant at the La Jolla Shores Hotel and the landmark AAA 4-diamond Marin Room restaurant in California. Pascale Jalam Jaubert grew up in the Gers region of France and earned 2 Michelin stars at Dominique Toulousy “Opera gardens” in Toulouse and at Guy Savoy in Paris. In her cooking workshop in Gascony, she teaches culinary courses and inspires chef teams to achieve the highest culinary standards with innovation and technology. Sara Moulton is a chef, television personality and former Good Morning America food editor. Claudia Sandoval is the Season 6 winner of Fox’s “MasterChef.” She is the author of “Claudia’s Cocina – A Taste of Mexico,” released in May 2016. Geoffrey Zakarian has 30 years’ experience as a chef restaurateur but is best known for being on Food Network’s “Iron Chef” as well as appearing on several of the network’s shows including host of “Cooks Vs. Cons,” a judge on “Chopped” and co-host of “The Kitchen.”

Greg Biggers is executive chef at Sofitel Chicago Magnificent Mile. He has worked for James Beard Award-winning Chef Rick Tramonto and Levy Restaurants during his career in Chicago. Greg Wade, head of the Publican Quality Meats’ bakery operations, is a semifinalist for the 2017 James Beard Award for Outstanding Baker. Billy Parisi is a chef, television personality, blogger and frequent contributor to IHA’s Inspired Home consumer-focused website. Chef Gemma Stafford hosts Bigger Bolder Baking, one of the top baking shows online with more than 1.5 million fans across social media and her website.

To view the most up-to-date participating chefs along with the scheduled dates and times, visit the Show’s website or download the Show app ih+hs 2017 from the Apple Store or Google Play.

The 2017 International Home + Housewares Show will feature more than 2,200 exhibitors and attract 62,000 total attendees. The Show opens at 10 a.m. Saturday, March 18 and closes at 3 p.m. on Tuesday, March 21. To register for a Show badge or for more information, please visit the Show’s registration webpage.