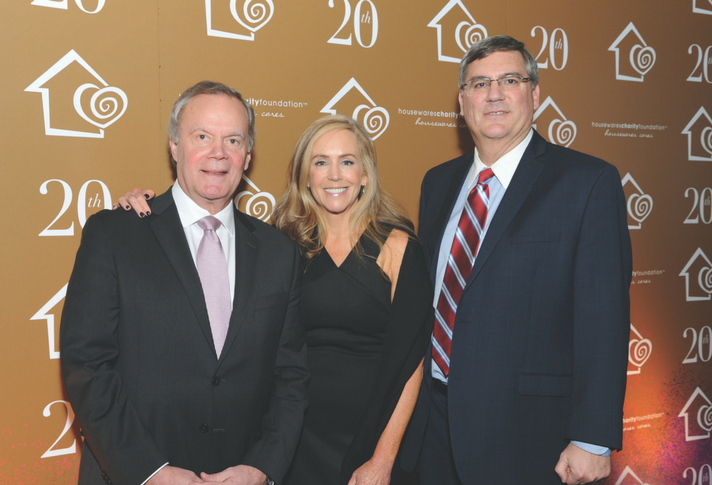 The housewares industry came together for “A Purpose. A Plan. A Promise,” to raise $2 million during the Housewares Charity Foundation’s (HCF) 20th annual gala on Monday, March 20. Proceeds from the event, held at Chicago’s Navy Pier, benefited the Breast Cancer Research Foundation (BCRF), the HCF’s legacy charity, and No Kid Hungry, a campaign by Share Our Strength that works to ensure that every child in the United States has access to healthy food where they live, where they learn and where they play.

Since the first gala in 1998, HCF has raised more than $48 million and has been credited with donating more than $28 million to BCRF.

Held annually in conjunction with the International Home + Housewares Show, this year’s gala honored Janet Hayes, president of Williams Sonoma, with the Lifetime Humanitarian Award; Richard L. Boynton, Jr., president of JURA Inc., with the Humanitarian of the Year Award; and Phil Brandl, president and chief executive officer of the International Housewares Association, with the Lifetime Leadership Award. The theme celebrated the philosophy and mission envisioned by the housewares executives who joined together to create the Housewares Charity Foundation in 1997.

The evening also included silent and live auctions, where guests bid on an extraordinary collection of relaxing get-aways, dinners, unparalleled culinary experiences, sports and entertainment happenings. Offerings included trips to Anguilla, British West Indies and Provence, France; tickets to the Ellen DeGeneres Show and Jimmy Kimmel Live; dinner at the James Beard House in New York; a private dinner by Bryan and Michael Voltaggio; and a weekend in California wine country. Of the $2 million raised during the evening, a record $290,000 was raised during the live auction.

The 21st HCF gala will be held March 12, 2018. For more information about the Housewares Charity Foundation, its honorees and its charities, please visit http://www.housewares.org/show/charity.