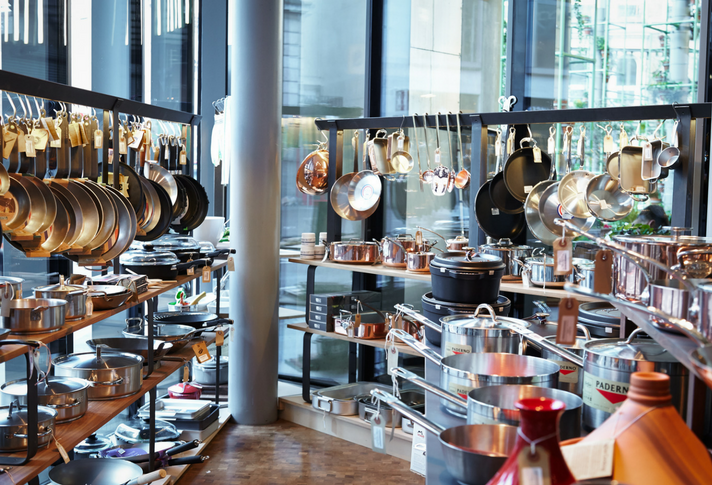 Michelle Hespe catches up with two Canadian friends who have managed to create a passionate retail-based community, Borough Kitchen, that all started within London’s Borough Market, with cooking and homewares firmly at its heart.

Taking the step from being successful bankers to the owners of a happening kitchen retailer in a thousand-year-old London food market doesn’t seem like the likeliest of career trajectories, but that’s exactly what Justin Kowbel and David Caldana did. And it’s turned out to be one of their best things ever.

Both Justin and David have always had a love of entertaining and in particular having friends over for dinner. However, it was about seven years ago on a Sunday morning that Justin realized wanting some extra tools for something he’d planned to make, that
he couldn’t buy exactly what he needed. It wasn’t that the products weren’t out there—they were—but he couldn’t find the quality and functionality that he wanted in them.

That’s when something in Justin’s mind shifted. Having grown-up in small family retail business in rural Canada, he always knew he wanted to do something in retail.  This provided the perfect opportunity to combine the things he was so passionate about: retail and cooking & entertaining. He was also lucky enough to have worked for a few highly successful brands in his banking career that had become friends.  They provided an invaluable sounding board to challenge his idea until finally he found himself taking the leap and quitting his job.

He was also very aware it’s all about location, location, location, especially when you’re trying to make a mark in a busy, incredibly populous city like London. So after the idea of creating a cookware store for home chefs had firmly planted itself in Justin’s mind, he knew that the core of what he wanted to offer was an edited choice of the finest quality cooking products, collated in the perfect spot to attract the ‘right’ customer. 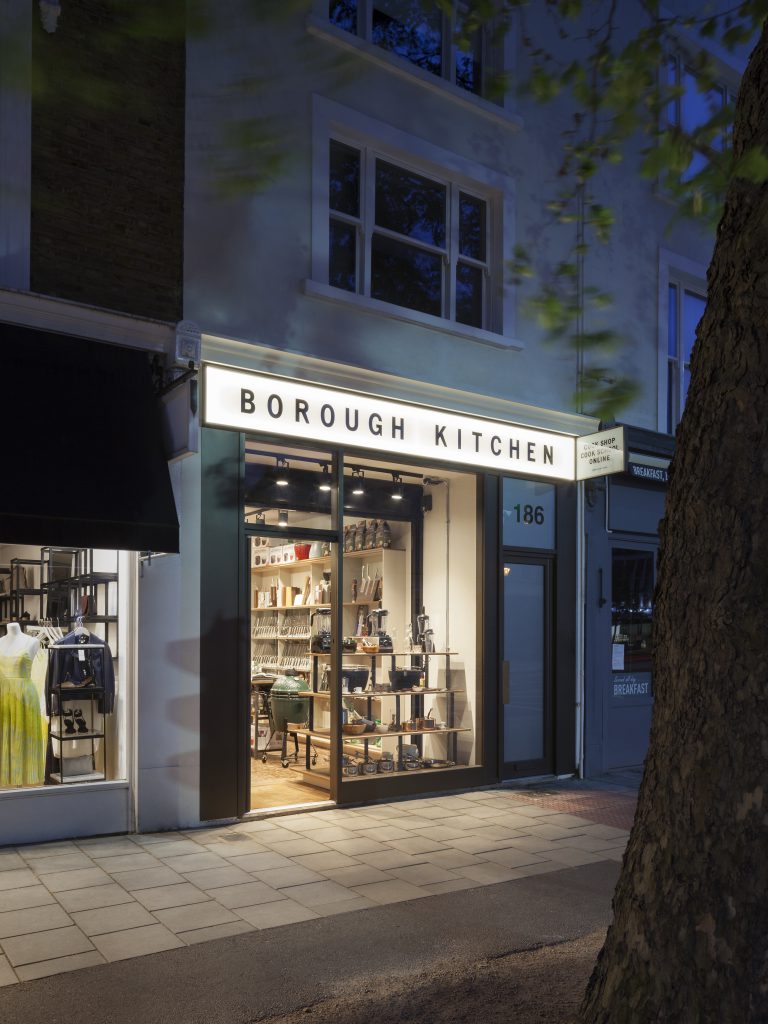 “There’s not a lot of color in our stores because it’s about how things work, not what color they are,” he says. “The discerning at-home chefs want the highest quality, most functional products in order to be the best possible at-home-chefs they could be. Or they want a high quality “value” option. And they certainly don’t want something that looks beautiful but doesn’t perform well.”

When he saw the future home of Borough Kitchen, Justin knew it was ‘the one’. It was a new building with five-meter-high glass windows allowing its surroundings to become a part of the experience, in the middle of Borough Market. This special niche of inner London is ridiculously rich with history, but is as relevant now as it has ever been, because it is London’s oldest food market. It has served the people of Southwark for over 1,000 years and has always been a place where people gathered to discuss food and what they would be making for friends or family.

Securing the dream building for Borough Kitchen took 14 months of negotiating as Borough Market management are so careful about the traders who join the market, ensuring up the market and must share its values. But Justin won them over, and Borough Kitchen came to fruition in 2013.

David, also working in banking at the time, put his hand up to start working on the weekends at the store, and the rest is history. “The people were so nice!” David says. “We couldn’t get over the fact that it was so much fun. It’s hard work, but we loved it, right from the beginning. So I left my job in banking as well.”

It wasn’t long before the men knew they had a success on their hands, and that they needed more staff to keep up the attention to detail that they required. So David became a co-founder, and the dream continued to expand. In 2014, a Borough Kitchen online store was launched, and in 2015 another brick-and-mortar store opened in Hampstead, with an integrated demonstration kitchen and a product trial area. Four months later, due to popular demand, a cooking school was also opened in Hampstead. Then a year later, a third physical store, also with a cooking school, opened in Chiswick.

The brand’s inspiring yet simple philosophy is carried through in the physical design, such as the floor created from the same materials as classic end-grain chopping boards, and the stripped-back merchandising that allows products to speak for themselves.

This streamlined sophisticated style, worthy of a top French chef’s kitchen, is followed through in the cast iron shelving frames, the French grey-washed plywood cabinets, the marble, walnut and linoleum countertops and the stainless steel surfaces.

And just like the purpose of a master chef, Borough Kitchen has a focus on things that make a difference to a person’s cooking experience, such as the in-store product trialing and the sharing of tips and recipes. “It’s all about the creation of an inviting atmosphere where customers can easily discover products and piece together their perfect kitchen,” says David. 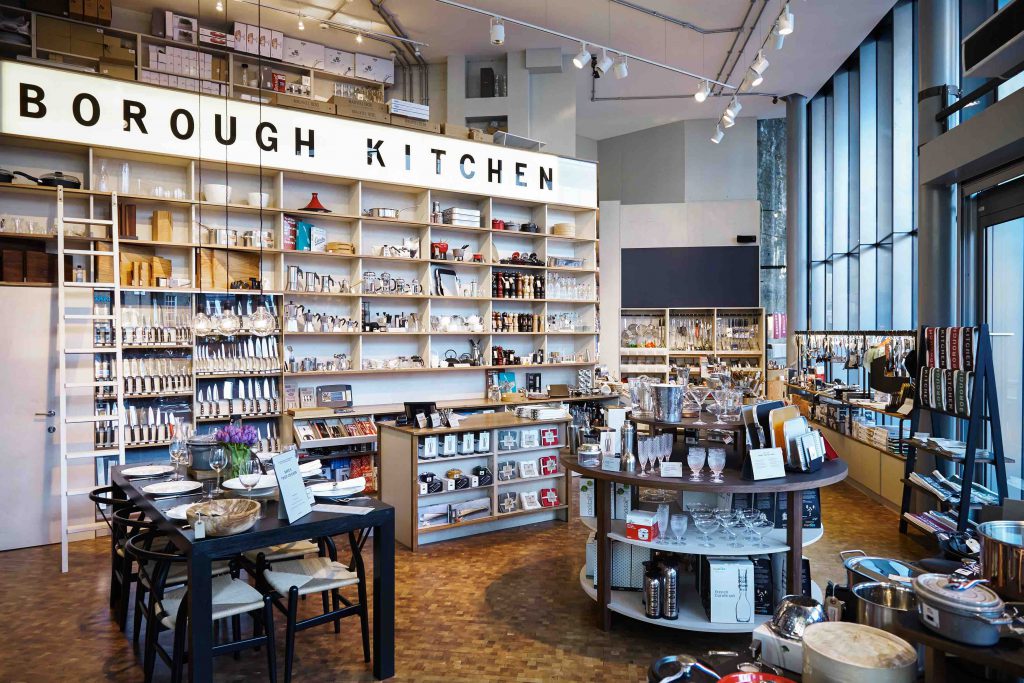 Borough Kitchen has done such a great job of creating this special atmosphere, that it’s not only resulted in a retail store that draws people back again and again to buy products, but has also led to the creation of a loyal community of food lovers intent on doing the best they can in the kitchen. “In-store and online, we share the reasons behind why we love our products. We also provide cooking classes, demonstrations and tutorials that help our customers develop their techniques,” says Justin. “Our team are highly skilled, passionate foodies (many of them trained chefs), who love engaging with our customers.”

The store also emphasizes the importance of touch—the tactile relationship between a person and the things to which they are attracted. Products are displayed without packaging so that people can touch them, and are merchandised by function and category rather than brand. The demonstrations are created to educate and inspire: customers test-drive knives on carrots and steaks, pepper mills are filled with peppercorns and coffee grinders with beans.

The duo also keep close to their community by using social media for the publicizing of events, sharing recipe photos, cooking tips and news of new products, and having engaging conversations with food bloggers, brands and their customers. “We work on building relationships with journalists and bloggers in order to be seen as go-to experts for new products and product information,” explains Justin.

Just as they concentrate on their community, Justin and David also know how important their team is to the success of their business. “We hire only the best people who are passionate about cooking and are excellent communicators,” says Justin. Importantly, job seekers must include their own recipe in their applications, because both men know that their team is the face of their business, and that they are integral to holding the community they’ve spent so much energy on creating together.

Becoming one of the five global honorees at the 2017 IHA Global Innovation Awards (gia) in Chicago was not something that Justin nor David expected, but it’s something that they value as much as the experience they’ve had so far in the retail business.

“It’s such a great feeling to be chosen as one of the top five retailers in the world in Chicago,” says Justin. “We were so flattered, and proud, as we were in there with such an exceptional group of retailers.”

“The submission process makes you really think about what you are doing and what you are not doing as a business. That’s a great thing, as change is essential for growth. We know we have to keep changing to keep up, with technology and with our community. One thing that we have learned throughout this journey is that change is a great thing. It’s all about keeping things fresh.”