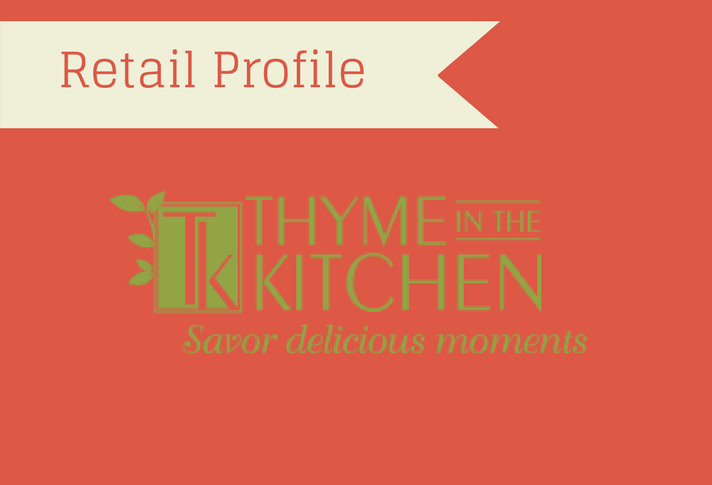 Thyme in the Kitchen may be tucked into a historic, Westside neighborhood in Evansville, Ind., but the store pulls in visitors from all over, many of whom are on their way to cities like Nashville some two hours away.

The reason? Eye-catching billboards posted along major highways around Evansville, which though a lovely place, is not typically thought of as a destination city. Thyme in the Kitchen gives travelers a reason to make a visit, says owner Marcia Jochem, who runs the store along with her sister, Ruth Richmond, who serves as general manager.

“We get a lot of out-of-town people who come in to shop because I promote the store through billboards,” says Jochem, who admits to being a billboard fan. “You go past them every day and it is top-of-mind marketing.

“Evansville is two hours from four major cities and a lot of people cross through our town,” she adds. “If you see a cute billboard that says Thyme in the Kitchen, it catches your attention. They are expensive but the cost is relevant to the number of people you can get through the door.”

Once off the highway, visitors find themselves in a historic district made lively by restaurants, bars and independent retail shops like Thyme in the Kitchen. A former executive at Berry Plastics, Jochem targeted the West Franklin St. location for her store because she drove down the street every day on her commute.

“I loved the street with its wide sidewalks and its old neighborhood; it is where I wanted to be personally,” she says.

When she decided to launch her store, Jochem bought a circa 1890 building that was being used for professional office space. A gut job followed, converting the space into a bright retail area with an upscale kitchen in the back. It turned out to be a good call as Jochem moved into the area before the real estate market started to heat up. “We got in early,” she says, “it is a real up-and-coming area.”

Now instead of doctors and dentists, the building houses a cooking school with a kitchen island that seats 18 and fronting a kitchen filled with high-end appliances such as a Sub-Zero refrigerator and Wolf range. “You don’t want to cook on some ratty old stove during a cooking class,” Jochem explains, “you want to give students something to dream about.”

The store hosts about 20 classes each month with a variety of themes such as date night, girls’ night out, lunch-and-learn sessions and kid’s classes. Participants can get hands-on cooking experience or choose a class where the chef demonstrates cooking technique.

Monthly email blasts go to a database of some 10,000 people, promoting upcoming classes that have been so successful that the Southwest Indiana Chamber of Commerce named Thyme in the Kitchen “Small Business of the Year” for 2016.

“We were very flattered because it was only our third year in business,” Jochem says. “We’ve been very welcome in the community.” And Jochem and her staff work hard to stay welcome, joining local retail groups like the Franklin Street Events Association.

“We are passionate about our local community and supporting events,” she says. The area businesses team up to host such community events as a Mardi Gras Bar Crawl, Movie Night on Franklin and the Franklin Street Bazaar. The group also organizes an annual Gumbo Cookoff, with proceeds going to support the Special Olympics. The Franklin Street retailers also team up to promote sidewalk sales and events like Small Business Saturday.

Thyme in the Kitchen’s motto, “Savor delicious moments,” is written in script above its entrance, and extends beyond what is cooking on the stove to the experience customers have when they enter the store. Jochem gives credit for that to her staff.

“I have a fantastic staff,” she says. “Every customer who walks through that door knows the staff is going to be helpful.” The team features a core group of “50 somethings” supported by high school students who come in after school. The combination of age groups works well together, Jochem says.

“It is a multi-talented group. Some of our staff can cook anything; others have a strong decorating background. They keep the store immaculate, they change displays all the time. It is exciting to work with such a fabulous group of people.” Couple that with supportive customers and a fun neighborhood and Jochem is savoring a “delicious moment” of her own.

“I couldn’t be happier,” she says.