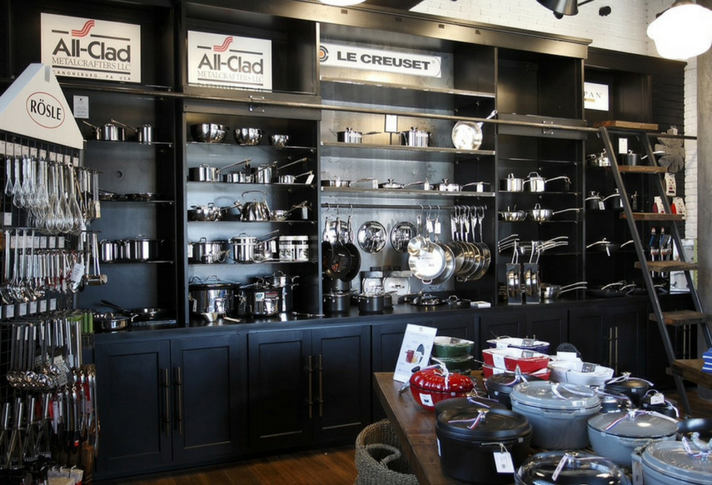 When Penny Klinedinst learned her friend Caroline Peterson, then owner of Plum’s Cooking Company, was retiring and planning to close the much-loved cookware shop, Klinedinst knew she had to find a way to keep Plum’s open. So she bought the store.

“She was going to close the doors and that didn’t sit well with me,” says Klinedinst, who also owns a neighboring store in the trendy East Bank area of Sioux Falls. “Plum’s is so relevant to this community. Anytime you see a gift like that it is foolish to let it go.”

The two friends sat down for a talk.

“She had no succession plans, no one in her group wanted to take over the store,” says Klinedinst. “The store was a regional destination because of her knowledge. There is nothing like it in the area and it is important for our city to have a first-rate culinary resource.”

That conversation turned into a purchase. “Looking back, I wish we had collaborated years ago,” she adds, saying that Peterson continues to consult with the new Plum’s team. “We are a great fit for each other and have a deep respect for each other.”

The purchase made sense to Klinedinst, an interior designer by trade, as she also owns Simply Perfect, an 8,000-sq. ft. lifestyle housewares store next door to Plum’s Cooking Company. Using her skills as a designer, and tapping into ideas that Peterson had, Klinedinst expanded the 1,500-sq. ft. space to 2,500 square feet and added a 600-sq. ft., state-of-the-art commercial teaching kitchen for cooking classes.

“We made changes Carolyn wanted to make but wasn’t at a point in her life where she could do it,” Klinedinst says.  In order to make the store more interactive, Klinedinst decided to devote that extra square footage to a central cooking space.

“It’s a huge kitchen, and many retailers would say that was not a good move because you can’t sell product out of the kitchen area when it is not in use; but that kitchen is the heart of everything we do,” she says. “Our classes are the most important part of our business, because it made the store more of a destination for customers, and they love it.”

The kitchen hosts both a wide variety of classes and is available for private events ranging from birthdays, anniversaries and bridal showers to private instruction for individuals or groups and company events. All classes are taught demonstration style by a number of local chefs, many of whom were in on the plans for the kitchen space from the very beginning.

Recent classes offered show the range: Sushi 101; Kid’s Baking Camp; Teen Baking Camp; Kids Cooking Camp; Fusion Taco Tuesday; Cupcake Decorating; and Basics of Bread Baking. Other classes provide educational support for some of the products sold in the store along with those that explain more trickier cooking techniques like Sous Vide Cooking, Ravioli and Gnocchi, and Grill Master: All-Day Grilling Workshop. And the cutlery category gets its due with In the Kitchen with Wusthof Knives and (the interestingly named) “Dueling Knives” classes.

The store’s location in the historic 8th & Railroad Building, situated in an up-and-coming section of the city, is also a draw for customers.

“I can’t even describe how cool our business district is,” Klinedinst says. But she tries, anyway. “In the summer, there is the First Friday of the month Art and Wine Walk. Every first day of the month through September is celebrated with a huge block party. The entire parking lot fills with thousands of people. There are local bands, food and beer vendors and admission is free.”

That brings out the crowds. “Every age comes, little kids, the elderly, the millennials. It is a riot and is not only great food traffic but great community bonding,” she says.

And while Klinedinst is still finding out who her customer is, having Peterson’s guiding influence, along with a new store manager, Tracy Hoem (aptly pronounced “Home”), helps her transition from the home furnishings industry to the kitchenware side of the business.

“I would never have done it if she hadn’t been on board,” Klinedinst says. In the end, for small retailers, relationships are key.

“People came to Carolyn because they knew her,” Klinedinst says. “And that is a big part of being successful. Listening to people who know what they are doing.”