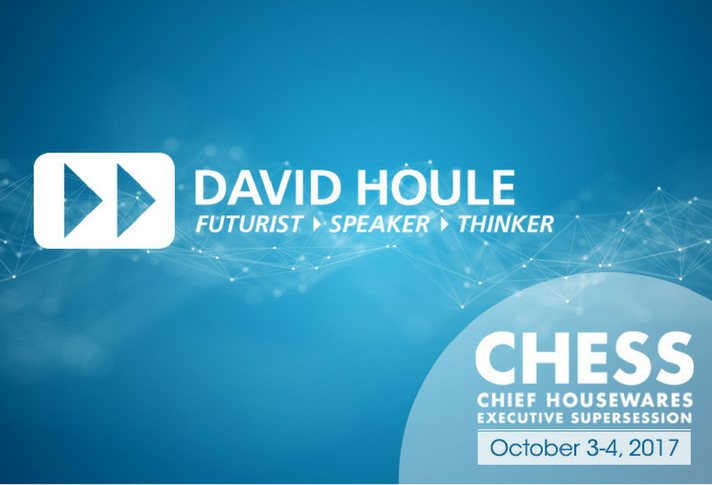 Day two of the CHESS conference will begin with David Houle outlining his views on global trends that are transforming us.  Houle, known as the “CEO’s futurist,” expands beyond the insights about brand shift he shared at the 2015 CHESS and challenges us to consider the dynamics and forces that impact us now and into the coming decades.

IHA spoke with Houle to get a preview of his upcoming CHESS presentation. “Executives often look at the future through the lens of their business—they’re worried about the value of the dollar, operating a factory in China. I talk about the incredible disruptions that will affect businesses and daily life from the outside in, not from inside out,” Houle explains. He adds that, unlike other futurists, he confidently posts his forecasts to show that his general trends are accurate five years out and directionally correct for the 10-year horizon.

David, what are some of your challenges in your work?
The single greatest thing I have to overcome is helping people understand their perception of reality. For most people, their reality is framed within their lifetime and to some degree shaped by their parents. So 1.5 generations of constructed reality is threatened by what will happen in the next 20 years. People over the age of 40 have spent the predominant part of their lives in the 20th century. We have to drop the legacy thinking of the past; we’re powering into the 21st century with 20th century models.

For instance, think of physical reality, based on atoms vs. screen reality, based on digits. The future starts in the screen and then changes physical reality. Because of amazon.com, big box stores are closing. People are buying fewer cars and taking fewer taxis because of the screen reality called uber. Hotels are scrambling because of Airbnb. In the next 20 years, the age of intelligence and the age of climate change will shape reality.

Your list of what lies ahead is daunting.
We need to learn about these coming changes and prepare.  We’re moving toward a marginal cost economy with ever lower prices in a global economy connected to technology.  Artificial intelligence and Big Data will result in the loss of some 50% of all current jobs. Education and medicine will be completely transformed as human life extends beyond 100 years. Virtual reality will redefine most human experiences. Climate change will create millions of refugees and many billions of dollars of economic losses.

How do you advise people who fear uncertainty and are concerned about the disruptions we are experiencing?
I’m an optimist. I see opportunity where others see problems. We must be alert and prepare to accept huge changes. We’re moving into a time of redefinition of fundamental issues in society, economies and nations. We have a lot of work to do—we have to redesign how will we continue to live on this planet.

David, how do you start your day?
I read widely. I read the major newspapers and magazines and scan emailed newsletters on many topics. I realized I need to read more books, so I aim to read at least 50 books per year. I look for patterns in the news to notice what’s the flow. I’m a synthesizer, a translator. I track what is at the forefront of science, Silicon Valley, design thinking and other news to give me a future look at today. Executives are busy running their businesses; it’s my job to think about these things in order to help companies integrate these insights to result in revenue.

“I can give you my best guesses about what will happen,” he closes, “and it’s up you to apply what that means for the housewares business.”

David will be speaking at the 2017 CHESS Conference in Chicago: