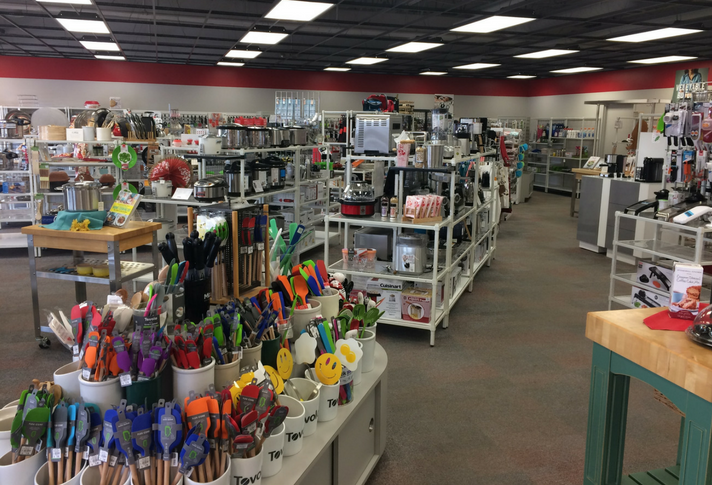 It’s a family affair over at Cooks’Wares, in Cincinnati. Founded by Paul Fricke and his wife, Mary, in 1992, and now run by Mary, along with their son Steve and daughter Sharon, the store has been the go-to place for cooking classes in northern Cincinnati since the day it opened 25 years ago.

Steve Fricke, the store’s current buyer, says his late dad (Paul Fricke died in 2010) was a former department store executive who saw the potential for an independent kitchenware store in the city.

“My father knew retail and saw that no one in this area was focusing on this particular area of housewares,” Steve says. As someone who oversaw the design of much larger department stores, Paul Fricke acted as his own general contractor when opening Cooks’Wares, designing for the cooking school right from the start.

That doesn’t mean a commercial kitchen with professional appliances, though, says Steve. “We wanted to use the same equipment our customers use in their homes,” he says. “That means we use the same Cuisinarts we sell in our store.”

The classes are popular, well-reviewed on Yelp and taught by a mix of local chefs, talented local home cooks and traveling cooking instructors. Fricke says most of the fall schedule classes filled up on the first day the schedule came out in August. The instructors are a bit like family too; Marilyn Harris has been teaching a class since the store opened, and is back for another round for this 25th anniversary year.

Harris is so popular, she’s become a headliner on the class schedule and has penned a “celebratory cookbook” of recipes culled from her time teaching at the store. She’s bringing a sense of that history to her cooking classes this fall with, “Memories of Cincinnati’s Tea Rooms with Marilyn Harris” and “Taste: 25 Years of Cooks’Wares Classes with Marilyn Harris.”

An IACP-certified professional instructor, Harris learned to cook at Le Cordon Bleu and has written four cookbooks. But the line-up of classes shows a range of topics for a variety of cooking skills, including “Kids Making Breakfast;” “A Week’s Menu for One, Two or More;” and “Pasta Ripieni: Filled Pastas-Rolled or Wrapped.”

Fricke says he never knows which class is going to sell out when he sets the schedule. “There are always some classes that surprise you,” he says. “It’s a mystery.” There’s nothing mysterious about the goal behind the cooking school though.

The classes, Fricke says, “Are designed to teach people things you can actually do…the instructor might be a chef but all the equipment is home equipment. We want people to duplicate everything at home.”

And it might be said that the store itself has turned out to be a second home for the Fricke family. Mary handles the financial part of the business, Steve is the main buyer, and Sharon—who had managed the Springboro, Ohio, location of Cooks’Wares before it closed last year—is now in charge of Cooks’Wares’ social media.

All three are at the stores most days, Fricke says, creating what he describes as a “challenging but fun” atmosphere. Working together so closely brings the opportunity to air some differences, and that he points out, is a plus.

“You are never going to agree on everything, and that’s good,” he says. “You need different points of view. And we each have different areas of the business that we take care of.”