With more than three decades of experience in Washington—as high-level Congressional staff and advisor, attorney, and as a consultant to corporations and associations on legislative and tax policy issues, Kenneth J. Kies, Managing Director, The Federal Policy Group, offered his insights on the current political environment. Speaking just ahead of the lunch break, Kies presented unsettling financial information with a light touch and wryly explained political controversies. 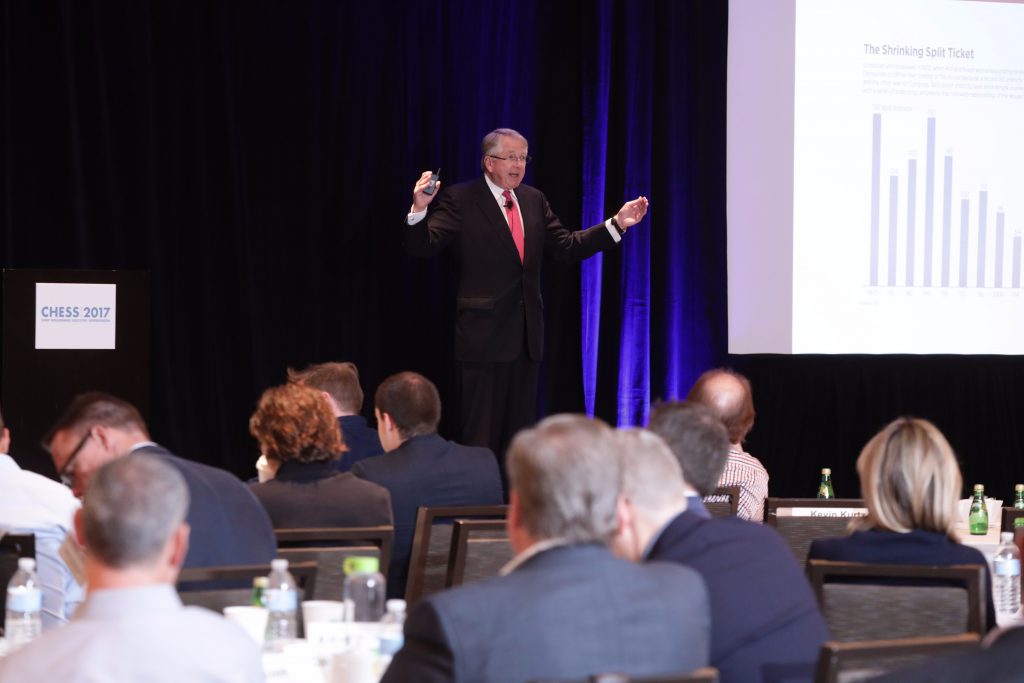 He began by outlining the country’s fiscal crisis, which is based upon rapidly rising national debt. Steep increases in interest costs on federal debt are projected: by 2022, this amount could exceed what the federal government has historically spent on R&D, infrastructure and education combined, and could exceed them by more than three times by 2050.

On the political front, Kies discussed the unexpected results of the 2016 elections. He illustrated his points with maps of red and blue states, and one map in purple showing 20 states split with some form of Republican control. The country’s polarization is much discussed and analyzed. The leadership of both parties is aged. Few younger leaders appear in the Democratic Party, the Republican Party is splintered and the President’s actions are unpredictable. He presented several maps showing Congressional seats to be lost or gained by Democrats and Republicans in the 2018 elections and offered various scenarios.

He also interpreted the actions of the Trump administration and its impacts on Obama executive orders and regulations, health care reform, the Federal judiciary and international agreements. Comparing Trump with past first-term presidents, this administration has not matched predecessors in passing significant legislation; however, it has effected notable changes with regulations related to labor and the environment.

Additionally, the President has been methodically filling vacancies at lower levels of the judiciary with life-time appointees. Actions on international agreements have been controversial. Battles over the budget continue and little progress has been evident in tax reform but is likely to accelerate as pressures build toward the 2018 elections. Few working days remain in 2017 for Congress to be on duty in Washington. Distractions include natural disasters, Russia, North Korea, the looming December 8th deadline for the spending bill, and the pending discussions about the debt ceiling. In short, Washington-watchers are on alert for daily developments.