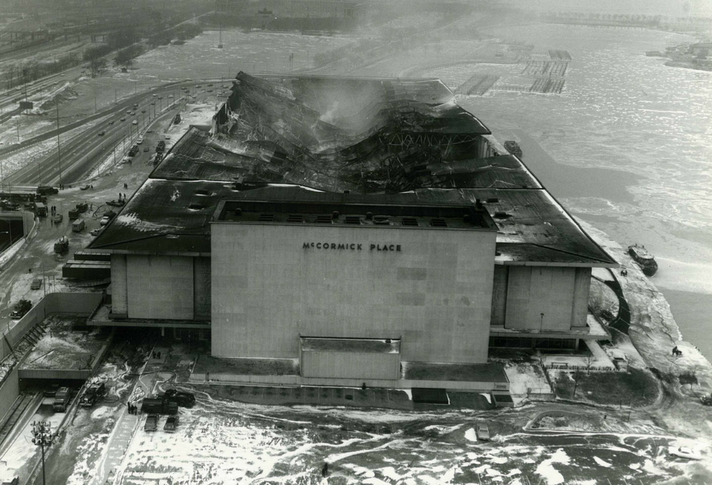 New Era on the Lakefront

More than 900 housewares exhibitors, formerly “squeezed” at Navy Pier, happily stretched into the comfortable 310,000 square feet of new space at the newly constructed McCormick Place on the Lake. Yet the grand facility was still too small for demand. The excitement brought 33,000 attendees to McCormick Place for opening day in 1961.

With the inauguration of the new hall, the Show bid farewell to Atlantic City and contracted for both semi-annual Shows in Chicago. The fortunes of the International Housewares Show were joined with McCormick Place for the next 57 years.

The Show’s size and services continued to expand, improving its appearance and efficiency. In 1964 carpeting throughout the halls extended a welcome to buyers who rejoiced at the new walking comfort. That year also saw the first “air rights” booth as new cubic-volume regulations allowed double-decker exhibits.

The Show That Didn’t Happen

Late Sunday night, January 15, 1967, 1,236 exhibitors finished setting up their booths for the National Housewares Exhibit at McCormick Place, fully expecting to meet 15,000 buyers the next morning on opening day. Instead, the industry experienced its greatest catastrophe and the most strenuous test of its resolve. 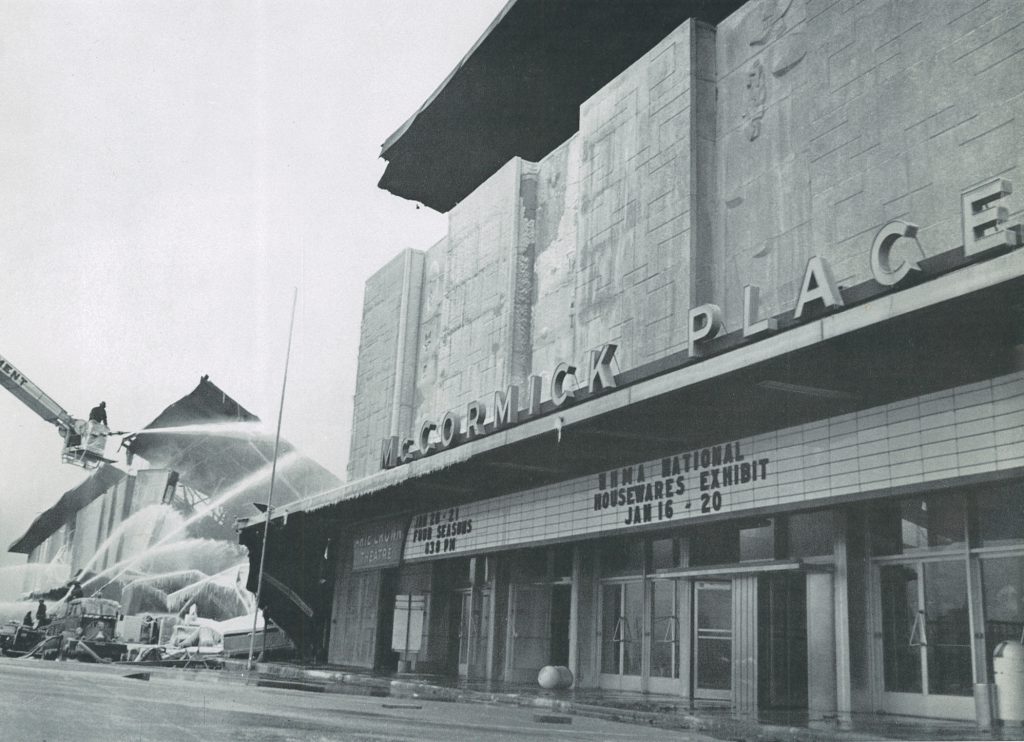 Hours later, at 2 A.M., security guards detected a small fire; faulty electrical wiring had ignited storage materials in one exhibitor’s booth on the upper-level main exhibit area. The flames spread rapidly through flammable exhibit walls and materials, and although firefighters responded within 10 minutes, the mammoth building’s roof collapsed in less than one hour. Racing downward through other exhibit floors, the inferno spread throughout the building despite the efforts of 65 percent of Chicago’s Fire Department working in 16-degree cold. Fire hydrants were frozen solid and firemen had to chop holes through the frozen surface of Lake Michigan to get water. By the time the fire was declared extinguished at 9:46 A.M., the country’s largest exposition hall was a total loss. 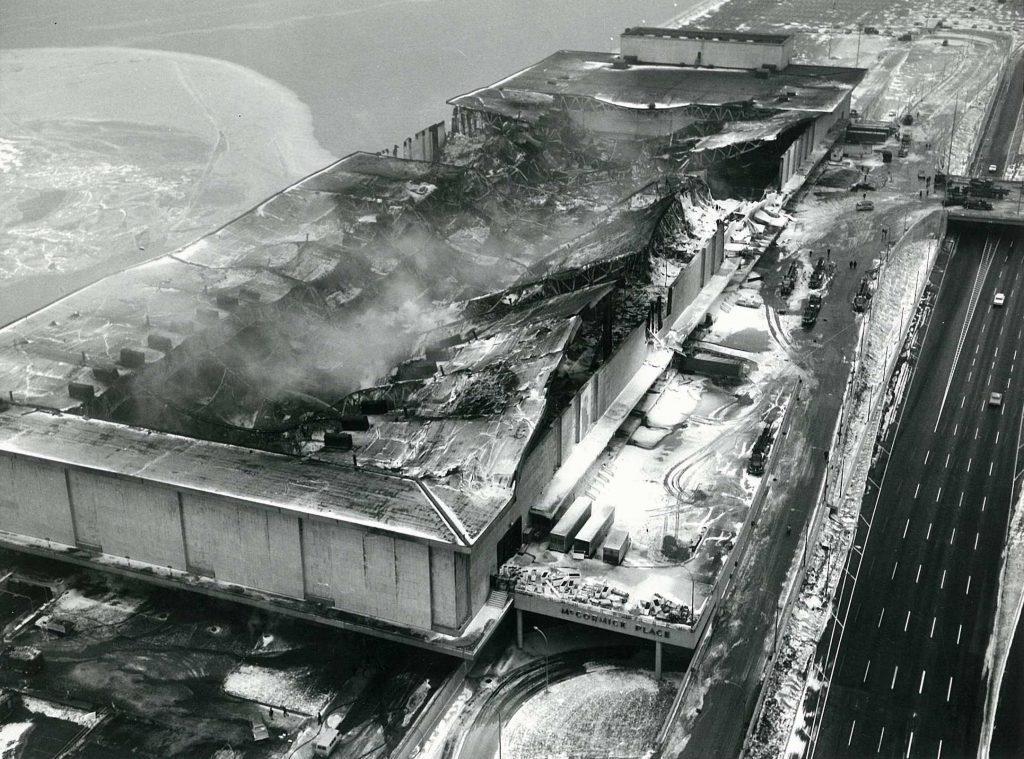 In a few hours a year of work for the housewares industry went up in smoke. In dollar value the conflagration was more costly than the Great Chicago Fire of 1871. Had the flame erupted a few hours later when the Show was in progress, the loss of life would have been tremendous. Miraculously, only one person perished in this tragedy. 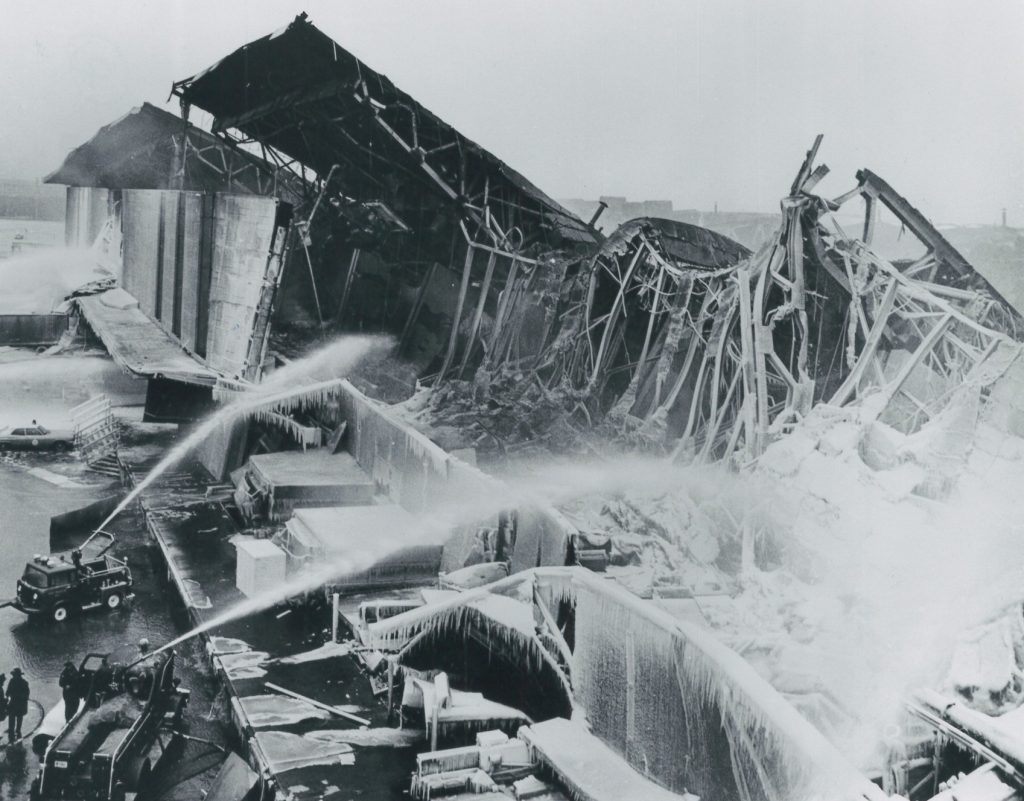 NHMA management convened at its Merchandise Mart office to deal with the emergency and plan a new Show as quickly as possible. Buyers and sellers scrambled to find each other, aided by communications systems at hotels, radio stations, and TV broadcasts in an impromptu news network. Circulars were printed and distributed along hotel corridors and signs were posted in hotel lobbies. Sales materials fortunately remaining in hotel rooms and product samples scooped up from Merchandise Mart showrooms and department stores had to substitute for exhibits worth thousands of dollars. Estimates varied on how much the disaster had affected business, but it was clear that small companies suffered the most from the loss of sales contacts.

Barely a week after the disaster, investigations and site clearance were hampered by the blizzard of January 26-27 that dumped a record-setting 23 inches of snow in the great single snowfall in Chicago’s history.

Several other cities stepped in to compete for the housewares trade show, but only Chicago had enough hotel rooms and the transportation systems to move 60,000 visitors in and out. In February, NHMA printed a Show directory listing exhibitors that would have displayed their wares at the 46th Show and announced that the Show would go on, at the International Amphitheatre on June 12-16.

The Show returned to its 1948 home at the International Amphitheater for three years of January and July expositions until the new glass and steel building, now known as the Lakeside Center, opened for business.

An Era Of Change

A new McCormick Place rose from the ashes of the old, and in January 1971, the 54th International Housewares Show “came home” to inaugurate the exposition center. Three levels of exposition space, 700,000 square feet in all, replaced the former facility’s 480,000 square feet. Still, the Show needed to grow. In 1979 the West Building (Donnelley Hall) was pressed into service for new housewares exhibitors with an extra day to attract buyers. During the 1980s, adjusting to the buying cycles of major retailers; the Association experimented with Show dates in spring in Chicago and fall in Atlanta. McCormick Place’s new North building added 300,000 square feet in 1986 to a Show that occupied three buildings.

In 1991 NHMA moved to a new quarters in Rosemont near O’Hare Airport. The show changed its title several times, most notably from the “National Housewares Exposition” in the ’80s to the “International Housewares Show” in 1992, when it became a single annual January Show in Chicago. Other trade shows offered access to diverse retail channels for the great variety of housewares products. While the industry’s need for a trade show venue was served by a single event per year, NHMA developed a menu of services assisting members in the operation of their business.