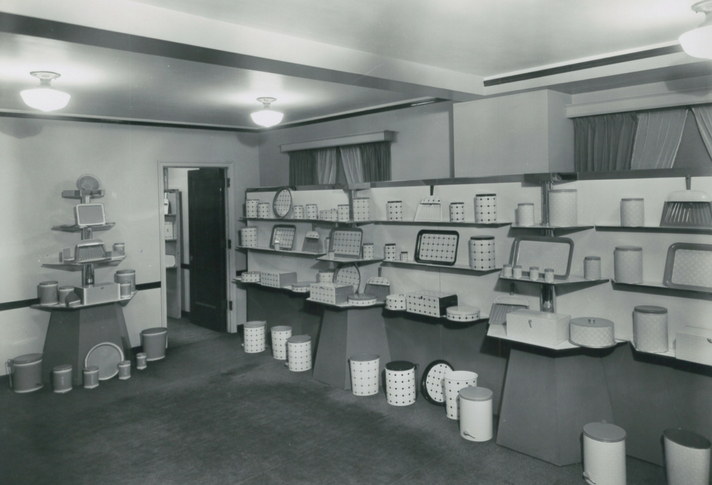 Markets and trade fairs have taken place throughout civilization, but the twentieth century’s first House Furnishing Good Exhibition was held in New York’s Madison Square Garden in 1906. The modern housewares exposition was born in 1927 when members of the National Home Furnishings Buyers Club decided that an exhibit in centrally located Chicago would be the most efficient way to view the products of many housewares manufacturers. The group convinced 115 manufacturers to display their wares at the Stevens (later renamed Conrad Hilton) Hotel on January 3-7, 1928. The newly established National House Furnishing Manufacturers Association (NHFMA) responded to their buyers’ request for an annual exhibition, and for the next 10 years, shows including kitchenware and major appliances were held at the Stevens.

Meanwhile, seeing the success of the Chicago group, East Coast promoters mounted the American Housewares Exhibit at New York City’s Hotel Pennsylvania on July 24-30, 1932. Two shows later, the New York group incorporated in 1934 as the New York Housewares Manufacturers Association. Unofficially the two groups agreed to a January show in Chicago and a July event in New York. This structure served the housewares industry well until personal rivalries erupted in Chicago in 1938, splitting the industry. IHA’s antecedent, the House Furnishing Manufacturers Association of America (HFMAA), incorporated in 1938 with offices in Chicago’s Merchandise Mart and stated its first show the following year at the Palmer House. The two groups with similar sounding names staged two January Shows in Chicago in 1939 and 1940 at the Palmer House and Stevens hotels. With the howls of buyers and journalists ringing in their ears, the NHFMA joined the HFMAA and consolidated into a single nonprofit organization, the Housewares Manufacturers Association (HMA), with a unified Show at the Palmer House in 1941.

Just as the housewares industry began to recover from the Great Depression, World War II radically changed the manufacturing and sales. Despite the bombing of Pearl Harbor in December 1941, the Show was held the following month at the Palmer House.

Unsuspecting of what lay ahead, Retailing magazine reported that fabricators whose civilian production had been sharply curtailed because their raw materials were necessary for the armed forces were already looking forward to the end of the war: “These makers are exhibiting here primarily to maintain close relations with dealers for they could easily distribute their limited stocks of finished goods without a show. They recognize that ‘out of sight is out of mind’ and therefore are using their display spaces just as they use advertising—to keep their names before the clientèle.”

In addition to the shortage of finished goods, manufacturers contended with lack of cardboard for packaging plus cutbacks in transport fuel and services. Deliveries could not be promised. Although metal products were scarce, sellers of flashlights, wooden stepladders, and shopping carts enjoyed brisk business. Manually operated products substituted for electrically powered conveniences.

The 1942 Atlantic City Show failed because of the government-imposed travel restrictions, and for the next two years no housewares shows were held. As manufacturers redirected their production to defense materiel, they worked at building brand awareness in anticipation of future demand.

This post is the first of a three part series. Continue reading:

From Hotels to McCormick Place: A History of the International Home + Housewares Show – Part 2

From Hotels to McCormick Place: A History of the International Home + Housewares Show – Part 3