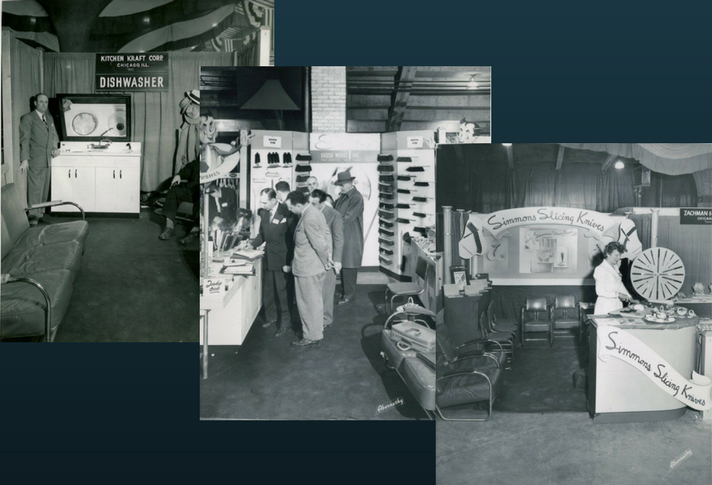 It’s January, and our calendars are focused on March, when our 121st Show will unite the industry. The current International Home + Housewares Show has evolved into a busy four-day gathering in Chicago, from a complex family tree of Show names, dates and predecessor sponsoring organizations. For 79 years, IHA has been sponsoring this major event, which is the premier home products show in the world. We’ll take a look at some of these earlier Shows in the weeks remaining until we meet at McCormick Place, March 10-13.

In January 1948, the industry met at the National Housewares and Major Appliance Exhibit at Chicago’s International Amphitheater.  This event 64 years ago was welcomed as a first step into a new era. Sponsored by the National Housewares Manufacturers Association (NHMA), an organization formed just two years earlier, in 1946, from the merger of two competing groups with similar names, it was the first Show in Chicago in a venue with a large open floor space used for expositions and conventions. Earlier Shows, from the 1920s through 1941, in Chicago had been held in hotels—exhibitors booths were in the hotel rooms. There were no shows during World War II and the first Show sponsored by the newly-formed NHMA took place in Philadelphia Convention Hall, April 27-May 2, 1947.

The January 1948 Show took place over eight days, Thursday, January 15 to Thursday, January 22. On Sunday the 18th, the show was closed all day. Exhibits were open from 9 a.m. to 5 p.m. The Annual Dinner Party with dancing and entertainment was held on Tuesday, January 20, at the Stevens (now Hilton) Hotel, with cocktails at 6:30 p.m. and dinner at 7:30 p.m. in the Grand Ballroom.

Spacious exhibitor booths were furnished with comfy sofas and ashtrays. They were framed in the cavernous space by sheeting and drapery, as the Amphitheater commonly hosted livestock expositions in the city, then still known as the meat-packing capital of the world. Private meeting rooms were shielded by curtains. A few examples of featured products were placed in booths set almost like living rooms. “Exhibits” were staffed by men dressed in dapper suits who often wore fedoras. Women appeared as models and demonstrators; the serious sales business was primarily the business of men. (Those were the days of “stag” parties for conventioneers….) The Exhibitors Directory listed 513 companies that displayed products that are no longer included in our Show such as curtain stretchers, garden furniture, seeds, fertilizer and lawn mowers, washing machines, ironers, ranges and dishwashers. Many companies offered small kitchen electrics, vacuum cleaners, cleaning supplies, heaters and fans, tableware, cookware and hand tools, closet organizers, bathroom accessories and plastic wares.

See below for booth pictures of Proctor Electric Company (Philadelphia, Pa.), and KitchenAid (Division of Hobart Manufacturing Co., Troy, Ohio) at the January 1948 Show. Their company names may have changed— the Proctor and Silex brands were eventually merged into the entity now known as Hamilton Beach Brands, Inc.—yet the products of these companies will entice today’s buyers just as they did 70 years ago.

You can see more photos of booths and demonstrations from the 1948 Housewares Show on our Facebook page in the Housewares History photo album.

Chicago’s Amphitheater proved too small for exhibitor demand and the January Chicago show moved to Navy Pier in 1949, where it remained until 1961 when the show moved to the just-constructed McCormick Place on the Lake.

For many years, NHMA sponsored two shows per year. In 1948, its “Midyear Exhibit” took place from May 30 to June 4 at the Atlantic City Auditorium. From 1984-87, NHMA experimented with spring and fall shows to replace the summer/winter alternatives, and then returned to January and July shows at McCormick Place. In 1990 and 1991, a September show in Atlanta replaced the July Chicago show. Finally, the January, 1992 Show established the single annual gathering at Chicago’s McCormick Place.

Much has changed over the years, yet even in today’s environment of rapid and global business transactions, the International Home + Housewares Show continues its focus—exciting new products and the value of meeting people in person—to  bring 60,000 people together.

This is part one of a two part series. Continue reading:
There’s No Business Like Show Business! Part 2