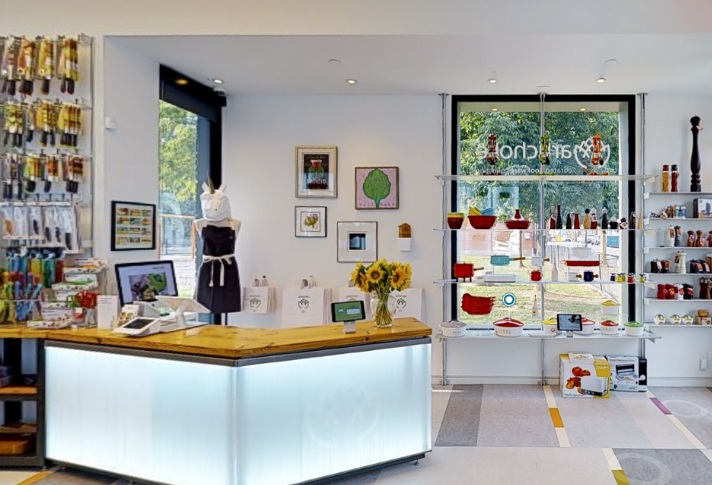 If you can’t shop at Artichoke in person, you can visit via a virtual reality version of the Cincinnati store. Available on the Artichoke website, the virtual store allows customers to get acquainted before they come in, something owners Brad and Karen Hughes say lets shoppers connect with their tightly edited retail concept.

The store’s merchandising takes an almost minimalistic tack, with walls lined with sleek shelving featuring only one item of each product on display. The rest are stored elsewhere. Customers, virtual or otherwise, see a honed-down version of carefully chosen products. It is a merchandising concept not dissimilar to the one Chuck Williams came up with years ago and Ron Johnson perfected at Apple. 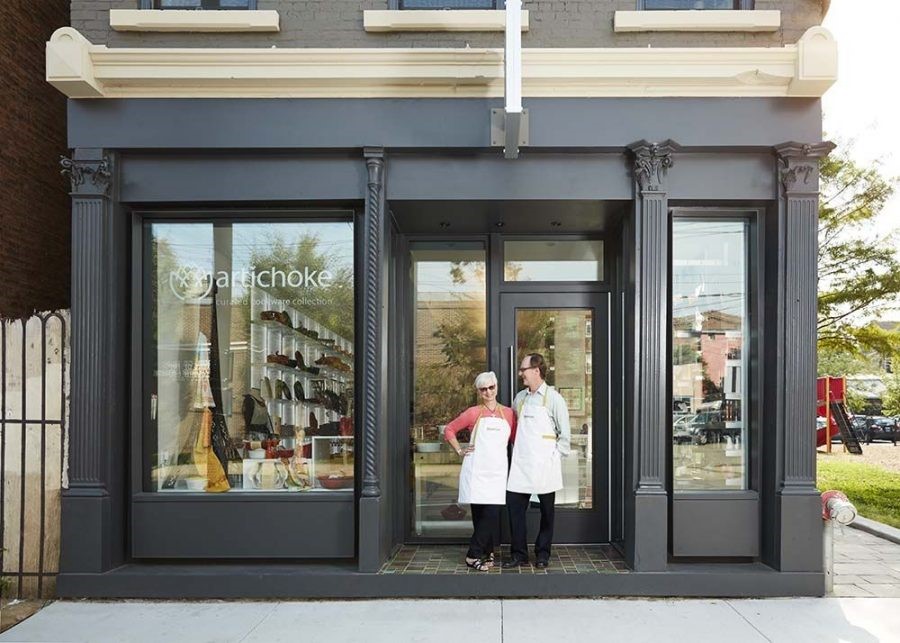 “We source products from Europe and Japan and try not to deal with China,” says Karen Hughes, pointing out that De Buyer is one of the more popular vendors. The husband-and-wife team also seeks out one-of-a-kind handmade items, especially those locally produced. “We deal with companies who are very strict on MAP and support small retailers and who don’t sell on Amazon,” she says. Working with buying group HTI has “been phenomenal” toward that business goal, Karen adds.

While the couple works with vendors to create product videos that customers can access via iPads, tablets or other devices, and have created a high-tech retailing vibe, the store owners themselves are decidedly old school when it comes to admiring old buildings.

The couple bought three historic buildings in the Over-the-Rhine area of Cincinnati. Working closely with the local Chamber of Commerce, they nailed down grants that helped them finesse the store in that up-and-coming neighborhood. 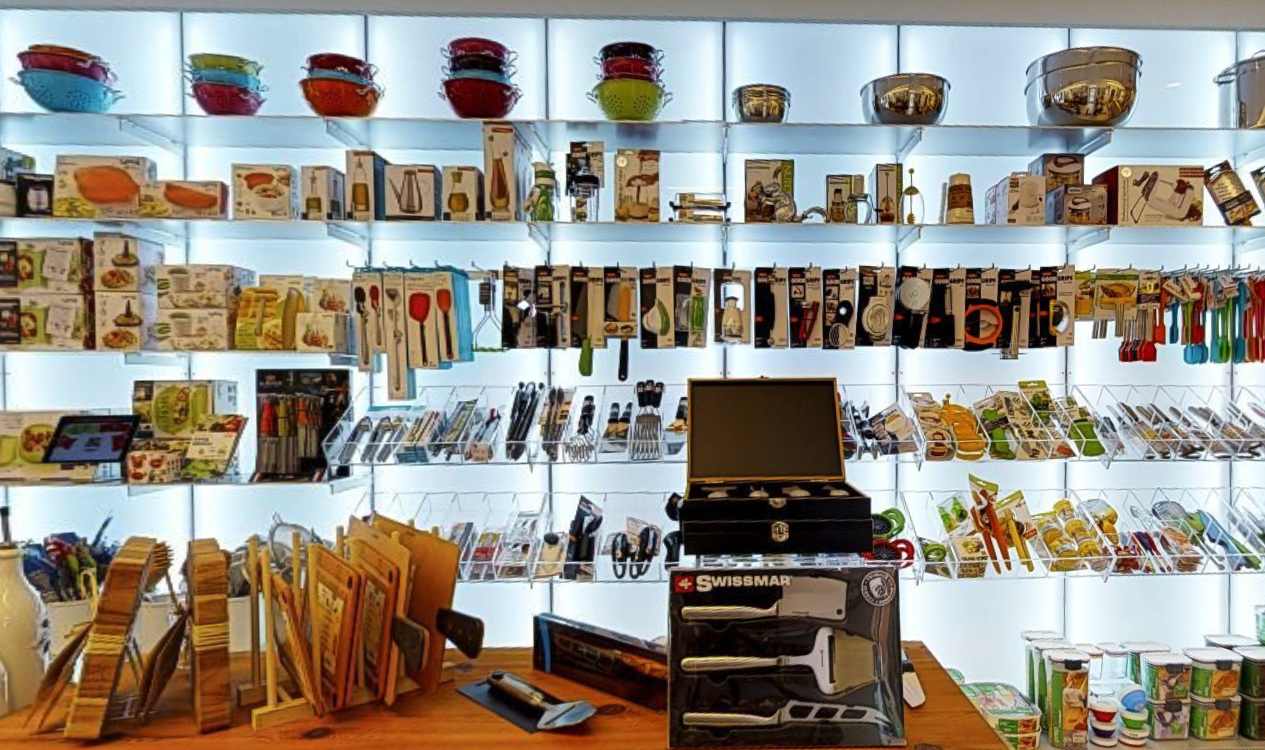 “The Over-the-Rhine Chamber of Commerce is terrific,” says Karen. “We received a grant a few years ago that was extremely helpful in getting store fixtures.”

And the region itself is supportive of a hands-on local effort, says Brad Hughes. “The community strongly resists chain stores. They want independent retailers, independent restaurants. We don’t even have a Starbucks. It is a very interesting neighborhood. The people who live here are committed to small business.” 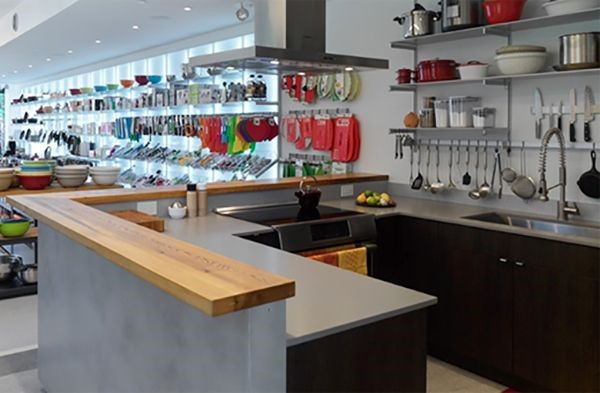 A 2019 IHA Global Innovation Award (gia) winner for retailing excellence, Artichoke caters to both experienced and novice cooks who frequent the Findlay Market, Ohio’s oldest continuously operating public market. The pair had often shopped the market for foods and spices but realized there was no place to buy cookware, so they took the plunge into retail.

To promote the cooking theme, the couple carved out 100 square feet for a demonstration kitchen, from the tight 883-sq. ft. space. Brad says they like to keep food cooking all day long, whether or not a demo is scheduled, because they like the vibe of home cooking in the store.

“We encourage our staff to cook their meals at the store. One of our employees will cook her dinner here quite often and bring it home to eat. We encourage that because we want people to cook. It is about food culture,” he says, noting that he was whipping up a lamb and preserved lemon tagine in the store’s kitchen for dinner that night. 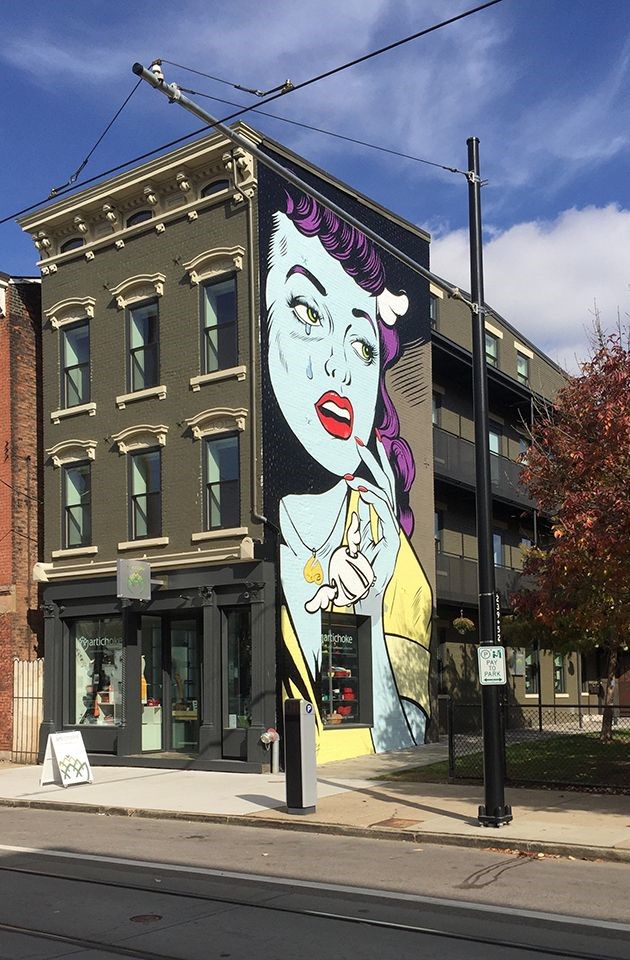 Karen, who is also a graphic designer, says the couple worked with architect Terry Boling to renovate the building into a store and two apartments. While they currently live above the shop, an adjacent building is being rehabbed into the couple’s future home.

The store’s renovation won a 2016 Cincinnati Design Award, a program that recognizes the best built-environmental design produced by Cincinnati-area creative firms. The store also gained a dramatic four-story mural of a large, weeping woman on its south wall, painted by British artist D*Face during Blink 2017, a four-day arts and architecture festival that drew over 1 million people to Cincinnati’s downtown and Over-the-Rhine neighborhoods.

“The best thing you can do for old architecture, is great new architecture,” says Brad. Even though the space is small, he says it can be an advantage, thanks to the tight product focus and clean display.

“Having a small space is a problem, but I look at it as an opportunity,” he says. “I call it retail jujitsu.”