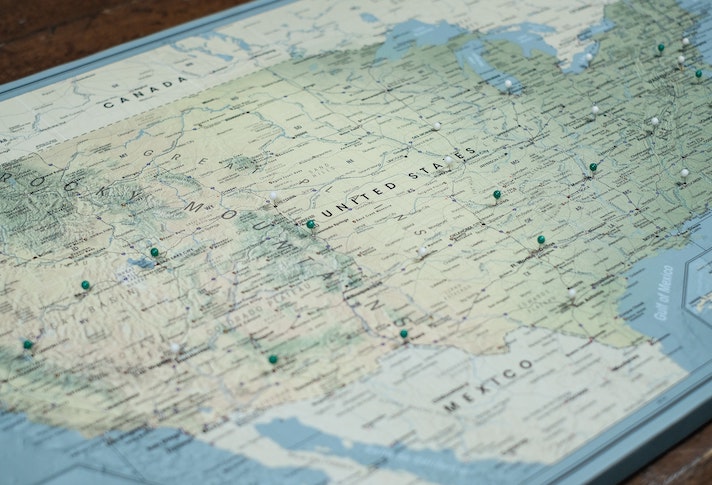 January 29 – Walmart Enhances Media Operation To Connect Brands With Customers
Walmart has renamed the company’s media group Walmart Connect in a move to underscore its expanding ability to connect brands and its 150 million weekly customers. From: HomeWorld Business

January 27 – Bloomingdale’s Plans New Small-Format Bloomie’s Store
Bloomingdale’s will unveil a small-format concept, Bloomie’s, at the Mosaic District lifestyle complex in Fairfax, Va., this fall. The 22,000-square-foot store will feature a curated selection of products and focus on services to give consumers more options for shopping, making returns, and picking up online orders. From: NRF SmartBrief

January 27 – Brick and Mortar Still a Preferred Way to Shop
A study from Raydiant finds despite dependence on — and growth of — e-commerce, many consumers want to shop in stores.
From: Store Brands Today

January 26 – Walmart Shows the Way on IoT in Food Retail
The Internet of Things promises to gain more use among grocers.
From: Progressive Grocer

January 26 – Transforming Ikea U.S. Registered Sales Of $4.7 Billion In Fiscal 2020
Amid change in its fundamental business, including abandonment of its traditional catalog, Ikea Retail U.S. released its 2020 Annual Summary, highlighting how the company is transforming its business to be more accessible, convenient, and sustainable— a process accelerated by the COVID-19 pandemic.  The summary, covering September 1, 2019, to August 31, 2020, fiscal year, outlines how Ikea Retail U.S. balanced the needs of the business, its co-workers and communities, the company.
From: HomeWorld Business

January 26 – Beauty retailer L’Occitane Files Chapter 11
The brand’s U.S. unit looks to use bankruptcy to shed stores as the pandemic weighs on brick-and-mortar sales and accelerates a shift to digital. From: Retail Dive

January 26 – Wakefern to Close 62 ShopRite Pharmacies Amid Stifling Competition
The cooperative plans to transfer prescription files at the affected stores to nearby CVS locations. From: Grocery Dive

January 26 – Jewel-Osco Parking Lot Kiosk Takes Curbside to the Next Level
PG tries out a new concept for Albertsons banner. From: Progressive Grocer

January 26 – Walgreens Taps Starbucks Operating Chief Roz Brewer as Next CEO
Brewer will replace Stefano Pessina as CEO of Walgreens Boots Alliance. Pessina will continue to serve on the board as executive chairman.
From  CNBC

January 25 – Kroger, Ocado to Open Automated Fulfillment Center in Phoenix
The facility will have digital and robotic capabilities designed to serve grocery delivery demand across the Southwest region, according to the companies. From: Grocery Dive

January 23 – Whole Foods to Enter Wyoming with Jackson Whole Grocer Purchase
The acquisition of the family-owned store is slated to close later this year. From: Grocery Dive

January 22 – Qurate, NRF Expand Small Business Spotlight
The Qurate Retail Group and the National Retail Federation Foundation announced they are expanding their Small Business Spotlight program to support 100 entrepreneurs of diverse backgrounds in 2021.  Qurate Retail Group will provide the selected businesses with on-air and/or digital exposure and various other pro-bono, in-kind services. The program builds on Qurate Retail Group’s support of small businesses, the company stated, and reflects its joint commitment with NRF Foundation to increase opportunities for underrepresented groups.  Throughout 2021, Qurate’s QVC US, HSN and Zulily operations— which, the company noted, reach more than 90 million U.S. homes via broadcast channels and millions.
From: HomeWolrd Business

January 21 – Sycamore Negotiates To Keep Belk Out Of Chapter 11
In another case of a department taking a sales hit as consumers stayed safe at home in the COVID 19 pandemic, Belk is wobbling, but it’s parent company Sycamore Partners is trying to keep it out of Chapter 11 bankruptcy, according to a report in the Wall Street Journal.  KKR & Co., Blackstone Group Inc. and other big lenders to department store chain are in talks with the retailer and Sycamore to avoid bankruptcy after the Chapter 11 process proved hard to manage for other retailers during the pandemic, the Journal stated, attributing the information to people in the know.  From HomeWorld Business

January 21 – Southeastern Grocers Launches IPO
After emerging from Chapter 11 bankruptcy in 2018, the company embarked on a five-year transformation plan to revitalize its business, which included focusing on its core banners and selling off its Bi-Lo stores.  From: Progressive Grocer

January 20 – How IKEA, H&M are answering the call for sustainability
Consumer demand, especially among Gen Z, is driving retailers and brands to embrace sustainability and keep the focus even in difficult years like 2020, sustainability managers from H&M and IKEA said during a session at NRF 2021: Retail’s Big Show — Chapter 1. “Gen Z has definite expectations about what a business is: It’s not just here to provide an item, it’s also here to improve the society and community in which it operates,” H&M’s Abigail Kammerzell said. From: NRF SmartBrief

January 20 – Costco is Testing Curbside Pickup
After years of resisting the popular service, the club retailer is now offering it at three stores in New Mexico. From: Grocery Dive

January 20 – Kroger Testing KroGO Smart Cart
KroGO cart allows Kroger customers to scan and bag in the cart as they shop, then pay from the cart and exit through the self-checkout area.
From: HomeWorld Business

January 19 – Bed, Bath & Beyond Completes Cost Plus Sale
Mark Tritton, the retailer’s president and CEO, stated “The completion of this transaction marks the conclusion of our work to streamline our portfolio. These efforts will help fund our transformation and put us in the position to start fiscal 2021 with a more cohesive set of core businesses in Home, Baby, Beauty & Wellness. From: HomeWorld Business

January 19 – Tuesday Morning CEO to depart
The off-price retailer is looking for a new leader at the top shortly after restructuring in Chapter 11 bankruptcy. From: Retail Dive

January 19 – Office Depot Turns Down Staples’ $2.1B Acquisition Offer
The office supplies retailer did say the board would consider combining its retail operations with its rival, as it proceeds with selling its IT services. From Retail Dive

January 18 – Macy’s Opens Second Market by Macy’s in Texas
Macy’s opened a second “Market by Macy’s” small format 20,000 square foot store in West Bend in the Dallas-Fort Worth area.  According to a Macy’s press release, the stores have an “edited assortment of the brands and items available at full-line Macy’s stores, with a range of accessible prices.”
From: Forbes

January 18 – Coresight: Fewer 2020 U.S. Store Closings Than Expected
Coresight originally forecast that as many as 20,000 to 25,000 stores might permanently close across the United States in a year plagued by the COVID-19 pandemic.  As it turned out, Coresight tracked 8,721 gross 2020 U.S. store closures versus 9,832 gross in 2019. From: HomeWorld Business

January 15 – Lowe’s to Focus on “Total Home” Strategy
Lowe’s has embarked on a “Total Home” strategy with the goal of growing market share by offering all of the solutions people need for every aspect of home improvement and decor. The mission comes as the pandemic has altered the way many think about their homes and a December survey revealed that 59% of consumers plan to spend some of their extra cash on home improvements. From: NRF SmartBrief

January 15 – Earth Fare to Open Florida Store
Earth Fare will open a store in St. Johns, Florida, in the second quarter of 2021, marking its return to the area after the banner shuttered all its locations last year. The chain now operates 17 stores in the eastern and southeastern United States. From: Progressive Grocer

January 15 – Walmart’s U.S E-Commerce Leader to Leaving Post
Marc Lore will retire from that job on Jan. 31 but will continue to serve as a strategic advisor to the company through Sept. 2021.
From: Progressive Grocer

January 14 – By the numbers: Holiday retail sales in 2020
Higher seasonal pay and shipping expenses hit margins, as Nordstrom joins the list of retailers that may have lost some sales to the third quarter.
From: Retail Dive

January 13 – Walgreens to Offer Credit Card in Broader Push into Financial Services
The co-branded credit card and prepaid debit card will be available in the second half of this year.  The card will be part of part of the Mastercard network and issued by Synchrony, and linked to Walgreen’s new loyalty program From: CNBC

January 13 – Miami’s Milam’s Markets to Open 6th Store in 2022
The Independent family-owned and operated business is expanding its footprint with plans to open a 6th store in mixed-use building development. Milam’s Markets has operated in Miami-Dade County since 1984.
From: Progressive Grocer

January 12 – Staples plans $2.1B Takeover of Office Depot
Office Depot’s board is looking into the offer, keeping in mind that the rivals’ past two attempts to merge were thwarted by antitrust concerns. From: Retail Dive

January 11 – Ikea Debuts Scaled-Down Store in Queens, NYC
The company introduced a smaller-format store in Rego Park, Queens. It is the first of its kind in the United States offering a full range of products in 115,000 square feet of space. From: HomeWorld Business

January 8 – Amazon Shuts Down its Pantry Service
The move to close one of its earliest grocery programs comes as the company prioritizes its stores and same-day e-commerce service.
From: Retail Dive

January 7 – Jewel-Osco Debuts Automated Grocery Pickup Kiosk
Albertsons Cos. is the first American grocer to pilot an automated and contactless grocery pickup kiosk from Estonian provider Cleveron. The temperature-controlled kiosk, located at one of the Jewel-Osco stores in Chicago, demonstrates the ongoing expansion of the company’s e-commerce business to provide convenient options to customers.
From: Progressive Grocer

January 6 – Lowe’s Plans Appliance Outlet in Texas
Lowe’s will open its first Texas outlet store in a former warehouse it closed in 2019. The Lowe’s Outlet, slated to open sometime this year in Irving, will sell scratch-and-dent appliances that will come with manufacturers’ warranties as well as dryer vents, refrigerator filters, and other appliance accessories. From: NRF SmartBrief

January 6 – Walgreens to Sell Wholesale Arm for $6.5B
Walgreens Boots Alliance will sell most of its Alliance Healthcare wholesale pharmacy business to AmerisourceBergen in a deal valued at $6.5 billion. Walgreens is the drug wholesaler’s biggest shareholder, and the deal will allow the drugstore chain to concentrate on its retail pharmacy operations. From: NRF SmartBrief

January 6 – Bed Bath And Beyond Names Wu buybuyBaby SVP
Amid reports of more store closures as part of its overall strategy, Bed Bath & Beyond has named Patty Wu as svp and general manager for its buybuy Baby banner, effective January 18. From: HomeWorld Business

January 6 – Amazon Buys 11 planes to Boost Airfreight Capacity
The aircraft purchases, a first for Amazon, come at a time when airfreight procurement has become increasingly difficult, and e-commerce demand is soaring. From: Retail Dive

January 6 – Macy’s Continues Downsizing Effort with 45 More Store Closures
The department store is more than halfway through its previously announced plan to close 125 locations within three years. From: Retail Dive

January 4 – New J.C. Penney Holds on to Key Officers as Soltau Departs
CFO Bill Wafford is among the executives staying on at the retailer as it searches for a chief executive under new owners. From: Retail Dive

January 4 – Crisis Management: How Executives are Handling a Turbulent Time in Retail
From the moment the pandemic started, retailers have been in a relative state of chaos. Here’s what some companies did about it. From Retail Dive

January 4 – Save A Lot sells 51 Stores as it Continues Effort to Cut Debt
The deal furthers the discount grocery company’s move toward a wholesale model without reducing the number of stores operating under the Save A Lot name. From: Grocery Dive

January 4 – Pardon the Disruption: 2021 Will be a Critical Year for Supermarkets
They’ve benefited from one-stop shopping, but the same structural and competitive forces that rattled them pre-pandemic are still lurking.
From: Grocery Dive