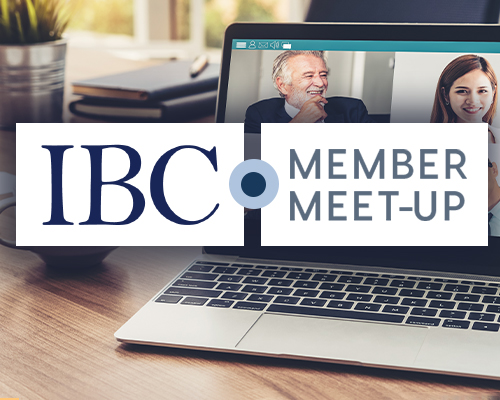 In early August, International Business Council (IBC) members met for the first of several planned IBC Member Meet-Ups. This networking and educational opportunity brought together interested members on Zoom to learn from guest speaker, Mark Chapman of IHA’s UK Office. Chapman spoke about the current situation in the UK with focus on the effects of the pandemic and Brexit. Participants were encouraged to ask questions specific to situations affecting their businesses as well as network with other participants on matters other than the UK market.

At the time of the IBC Member Meet-Up, the UK government removed all major restrictions around Covid and Covid safety, freeing residents to go about their business but with caveats and suggestions on how to behave. Retail, hospitality and entertainment venues are now open but there is still tentative behavior and mixed messages about mask wearing, Chapman said. This has affected retail and consumers’ response to stores being fully open, he said.

Where consumers shopped has fluctuated over the last 6 to 8 months.  In the beginning, online retail received an uplift in business. Because of Covid rules, independent and “mom and pop” stores were closed, while grocery stores and major supermarkets were able to stay open and sell similar products. As Covid restrictions were lifted, consumers rushed to shops because they were finally able to see and feel products again, Chapman said. This return to in-person shopping slowed internet sales.

Despite a bumpy start in 2021 as businesses and brands tried to identify the best channels to work with because of stock, transport and supply chain issues, Chapman said things are beginning to even out into a more normal retail environment with regular buying patterns and a return to seasonal purchasing by consumers. He expects this to continue and doesn’t foresee any more lockdowns because of Covid due to the vaccine rollout. Chapman said the UK is about six to eight weeks ahead of the U.S. in its Covid battle, and as the U.S. is seeing a spike in cases because of the Delta variant, the U.K. is now leveling off as the vaccine lessens the rate of infection.

One consequence of the large spike in Covid-19 infections is the lack of staff throughout the supply chain to get products on shelves and get goods to customers, he said. UK residents have an NHS testing tracer app on their phone, which alerts them with a “ping” if they have been in close contact with someone with Covid-19. Anyone “pinged” is contacted by testing tracers from NHS and is expected to quarantine for 10 days. With a spike in cases and a very sensitive app, Chapman said 500,000 to 700,000 people a week were getting pinged and are told to isolate at home, causing a huge impact on retailers and hospitality venues.  This means there aren’t enough people to man stores, fill the shelves or transport goods, so there is a huge transportation problem in actually getting goods around the UK, he explained.

Chapman said he is hopeful some of those effects will be mitigated in August as a Covid rules change means residents won’t have to isolate if they don’t test positive for Covid.

Brexit has caused a major economic shift in the UK’s relationship with Europe as well as a major impact on transportation of goods and products, Chapman said. Specifically, at the start of the pandemic people who were from outside the UK returned to their home countries and have not come back. Many of them were goods vehicle drivers and Chapman estimates the country is short about 60,000 vehicle drivers. Coupled with the “pingdemic,” as it is now being referred, and other supply chain issues, UK retailers are struggling to keep product stocked.

Another impact of Brexit is that many of the temporary arrangements put in place for the importation of goods from the EU, such as importing to Northern Ireland through southern Ireland, have come to an end with no further agreement in place, Chapman said. The final arrangements for importing goods are still very much in transition in some circumstances. Chapman told IBC members it would be worthwhile to look at individual situations when trying to import into the UK to understand how much more paperwork they will have to do in terms of customs and import documentation because it has increased greatly. Some companies are using specialist companies to do the paperwork and 3PL companies, so logistics companies in the Netherlands and Germany are better understanding how they can facilitate their customers goods into the UK, he said.

The UK market in general is returning to some normalcy in terms of sales volume and retail environment, Chapman noted. The IMF recently upgraded its outlook for the UK market to 7% growth this year, marking a serious return to pre-pandemic levels, he added. Chapman credited the growth to the UK being ahead of the curve on things that happen with Covid. He cited strong retail recovery in certain sectors, strong online recovery in others and generally a positive economic outlook through 2021 and into 2022.

Chapman encouraged U.S. suppliers to look at the UK as a future market because “there is a lot of strength there, plenty of opportunities.” Because business has been disrupted, he guaranteed there is opportunity in spaces within the marketplace to explore.

“Looking to 2022, there are good signs to investigate the UK market seriously and find out what your best way is to enter the market if you are not here already or expand portfolio if you are,” he said.

Chapman also took questions from attendees on sales and distribution opportunities, electrical goods certification changes because of Brexit, whether the home cooking trend that became strong during the pandemic will continue and how will retailers handle pricing pressure.

Over the next 12 months, Chapman said there will be opportunities for suppliers to partner with distributors and others who have the ability and networks of buyer contacts to bring new products to market, and this hasn’t been the case for a long while. Electrical goods certification is currently the same, but come Jan. 1 2022 a new standard called UKCA will be introduced but will meet the same standards as CE marketing. If a company self-certifies for CE marketing, they will be able to continue to do that under the new standards.

Chapman said that cooking and baking at home continue as strong trends coming out of the pandemic. He said they were strong before the pandemic and grew with sales of air fryers and multicookers during the pandemic. This trend “stopped dead” in April when lockdown restrictions began to lift, and people were allowed out of their homes and spent money doing things in public. Once again home baking, cooking and focus on entertaining in home and in gardens is gaining steam.

Chapman spoke on pricing pressures, mentioning that all are importers and sucking up freight increases as much as they are able, but at some point, they will have to push these costs to retailers and the retailers to the consumers. Retailers understand and are under the same pricing pressures. One online retailer was quoted in The Times saying that they expect to see shipping costs as much as 20% of their overall overhead for the 2nd half of the year. The market is seeing huge pressures, 10 times what was being paid 18 months ago for the cost of containers…and that’s if you can even find a container, he said.

Chapman added that it is inevitable that price increases will have to make their way to market. He expects to see prices increase strongly into fall and the key Christmas market, adding he thinks retailers “are going to try and ride the wave of people being excited about product for the holiday and worry less about the price.” Significant price increases extending across the housewares industry in the third and fourth quarters are anticipated.

Mark Chapman of PR Direct serves as IHA’s UK Office. He can be reached at  ihauk@prdirect.net.