Upon the golden balconies of the Hilton Chicago’s Grand Ballroom, as members of the Party Faithful brass band stood with their drums at the ready for summoning everyone to dinner, it was difficult not to feel humbled by the time, effort and money so many people expend, year after year, for one of America’s finest charity dinners. Since its inception in 1998, the Housewares Charity Foundation (HCF) has raised almost $19 million and has attracted some of the most highly respected players on the global vendor and retail scene. 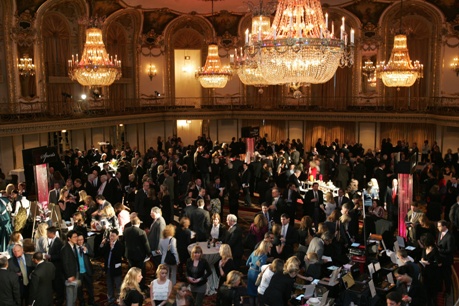 Below the balconies, hundreds of people gathered, admiring the line-up of stellar products donated by companies such as Meyer, KitchenAid, HAAN, Groupe SEB North America, Homedics, Conair, Lifetime Brands, Hartmann, Tramontina and The Estee Lauder Companies. One after another, they signed up their bids for the pieces on display. There were handbags by Coach and Ferragamo, sunglasses by Chanel and Dolce & Gabbana, golf clubs by Wilson and fine china by Lenox.

On the higher end of the bidding action, there were trips to Provence during grape harvest time, luxury holidays in Vail, Hawaii and of course, New York City. There were private dinner parties hosted by QVC’s Mike George up for auction, and extraordinary culinary experiences at several of the celebrity chefs’ fine dining establishments, including a unique behind-the-scenes experience where guests could witness the journey of fresh produce to the patron’s table. 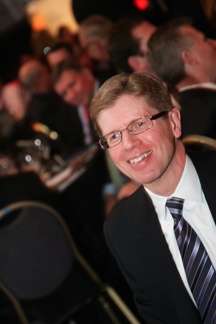 Many in the jaw-dropping attendance of 800 at this year’s dinner, dressed in their best, were well aware that Mike George—philanthropist and president and CEO of QVC, Inc.— was amidst them. George was honoured with the 2010 Lifetime Humanitarian Award, and this year, he helped achieve the $2.2 million total by raising a record $1 million—the largest fundraising by one company in the history of the HCF.

The word ‘dishes’ would not do justice to the finely orchestrated cuisine created by some of America’s top celebrity chefs—all James Beard Award-Winners. A 4-course meal for 800 was prepared by the chefs and presented in full view of the diners—a feat, as most of us would know after watching shows like Top Chef, is nothing short of phenomenal.

During a touching tribute to Gretchen Gotthart Skeldon of Libbey Inc., who passed away in February after a long battle with breast cancer, there was barely a dry eye in the Hilton’s ballroom. She was a woman who, despite her long battle with cancer, led an amazingly inspiring life. Above her desk at work she kept a note that told her and all those around her, that she would not be defined by cancer, but that rather, it would give her the opportunity to help others in their struggle against it. Gretchen’s approach to life, and to cancer, was something that moved everyone that night. Enlightened by her smile, that shone from the photograph above the gathering, the thought passed through a united mind—next year, we can do even better. Very soon, we might just defeat this thing called breast cancer.

For more information about the Housewares Charity Foundation, its honourees and its charities, please visit www.housewarescharity.org or contact Paul Murphy at +1-508-272-0717 or pimurphy11@gmail.com.