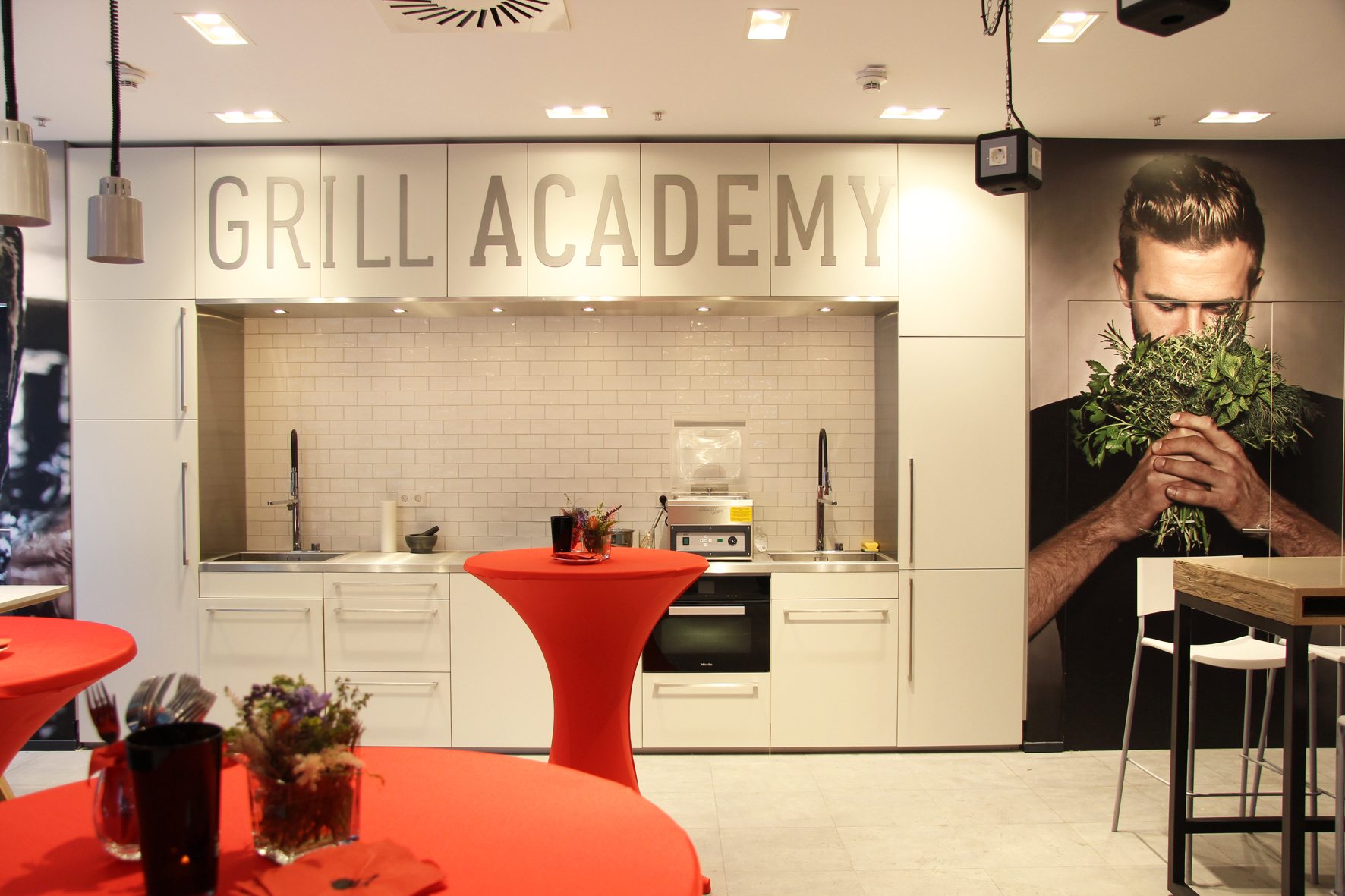 What are the current and emerging trends in retail design and what should you watch out for to ensure that you are ahead of the game? After all, one thing will never change, to be a top retailer you have to remain top of people’s minds, and that means continually offering a refreshing and exciting retail experience that is unique and arresting. 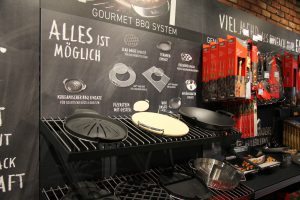 Wolfgang Gruschwitz is a man who has to keep one step ahead of others when it comes to retail design. He is the owner and managing director of the Gruschwitz Corporation – an agency offering full-service retail store design and visual merchandising expertise to retailers. He lectures at the European Retail Trade Institute and the Retail Trade Academy, and he is one of four expert jurors for the gia Global Innovation Awards held annually in Chicago at the International Home + Housewares Show.

So when it comes to trends in retail design, Gruschwitz knows more than a thing or two. And he is always travelling and checking out what some of the best retailers in the world are doing.

“Today, the ‘like it’ button (which Facebook created with spectacular success) is more than a just a recommendation, it is the trigger for success when it comes to a product or service,” Gruschwitz says. “Information is everything today, but people still need a wide selection of offering and security surrounding their choices.”

Today, no matter where you are on the globe, you are not alone because you are connected to everyone and everything – to the community out there. “This we have to calculate in retail design,” says Gruschwitz. 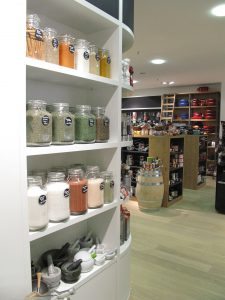 Gruschwitz uses H&M’s virtual dressing room as an example of a new retail idea that is also a part of retail design, whether it is online or a concept that customers can use in-store. The idea is that you create yourself as the model – down to height, weight, size and appearance, and then virtually try on clothes to see what works and what doesn’t.

The magic mirror shows you the latest styles in clothing things that will fit you. Your friends can see you, one-on-one online and can make comments.

So the concept creates a community and brings people closer together, giving the consumer more reassurance and that feeling of being connected to others throughout the experience.

Today, there are hordes of companies fusing different elements that may not have gone hand-in-hand in days gone by – such as fashion and food – to create a successful retail business. This trend is rooted in the concept of capturing customer attention and keeping them entertained. And as there are so many choices now for everyone, from all over the world, it is essential that customers are not only entertained, but that they also feel special. Again, it is about creating community and making people feel as if they belong to something larger than themselves.

“This is only the beginning – and the Internet is the new flagship store,” Gruschwitz says. “But whether it is a bricks and mortar store or online, you still need to mix expectations and emotions – it is the only way to get people attracted and entertained in an ever-growing and overloaded world. Everybody wants more and needs more incentives to be attracted to something, but on the other hand, we all want to slow down and relax.” 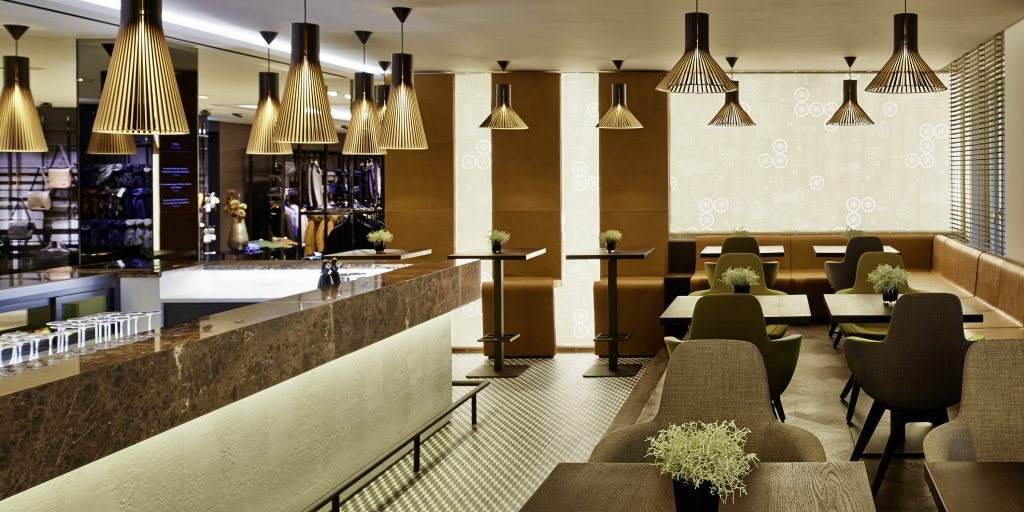 Mixing food and beverages with retail has now become so common that it is almost the norm, and it is practically compulsory for high-end retailers. “But now the food has to be special and the quality of these offerings has to fit in with the surroundings,” Gruschwitz stresses. “People look for things that are different – like the restaurant in the middle of nowhere that becomes a location for foodies – if there is a retail store in that place too, then the foodies become fans. And always remember that to have fans instead of clients is as good as it gets.”

Gruschwitz’s catch-cry for his clients is all about sharing emotions to keep potential customers and clients connected to your brand. “It’s always about telling a story,” he says. “With this concept, you need to connect the food to the retail offerings. Everything has to belong.” 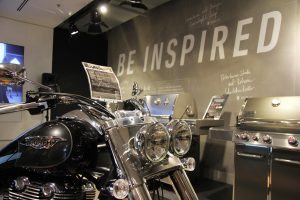 Gruschwitz uses the example of a store in Berlin called TYPE HYPE to illustrate his storytelling point. The store sells typography items – such as high-end printed postcards, notebooks and diaries. But the big difference is that the owner of the store, who is a graphic designer by trade, tells the story of the old book printing craft through his store and products.

“Back in the old days of book printing, the workers in that field were always in contact with lead and were in danger of being poisoned. Life expectancy was not great,” Gruschwitz explains. “So the way to possibly avoid this fate, they thought back then, was to drink fresh milk. So book printing companies gave their employees free milk to drink.”

So that is how TYPE HYPE has successfully linked in milk in its retail store. “The store owner sells fresh milk from regional farms, fresh baked bread and other high quality products, including special wines, spirits and cakes,” he explains. There is also an arty hotel next door, so its residents eat breakfast at the store and enjoy the atmosphere. All of this, again, creates an emotional experience for the customer and a warm community in which the customer can interact with others and new products. 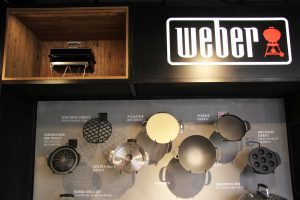 Gruschwitz also uses the Weber BBQ store in Berlin as a great example of retail storytelling by exploring the heritage of barbecued food. “It’s the only store in Europe where you grill food on a normal outdoor grill (charcoal, electric or gas) in the store! You can bring your own meat and your friends, and make a dinner with the ‘grill master’ – the in-store chef on the BBQ! Amazing.”

Vertical gardens and plant-life in store is not something new, but it is a trend that is developing as people become more and more interested in food and where the produce that they are consuming comes from. The concept is now being used in stores, and this creates not only an aesthetically pleasing environment but also means that people are breathing in good fresh air and are surrounded by greenery in a city.

“Vertical gardening is not only for decoration as it once was,” says Gruschwitz. “It is becoming a micro-solution for health in that people can grow vegetables and produce their own nutrition.” The idea can be expanded as storeowners can grow their produce anywhere in their building under hydroponic conditions – in the cellar or warehouse or storage areas. They can be producing their own food while running a retail business. And if a retailer can also use that food in their in-store café, even better.

Another trend that Gruschwitz has noticed taking hold that also works well with the sustainable/green movement, is the use of transparent concrete, which is a combination of glass-fiber and concrete. It results in a transparent wall, causing less artificial light being used. “The new movement in this sector is about not taking energy, but rather about creating energy within a building,” says Gruschwitz.

As they say, necessity is the mother of invention, so the fact that retailers have had to change their entire approach to selling product in today’s world is not a bad thing. Rather, it has created an exciting new movement that embraces fresh concepts aimed at involving people more in retail operations. Instead of retailers just selling products to people, they are aiming to welcome them into a community. On or offline, that is a beautiful thing.

To learn more about retail design, Wolfgang Gruschwitz and the projects of Gruschwitz GmbH, visit http://gruschwitz.de.