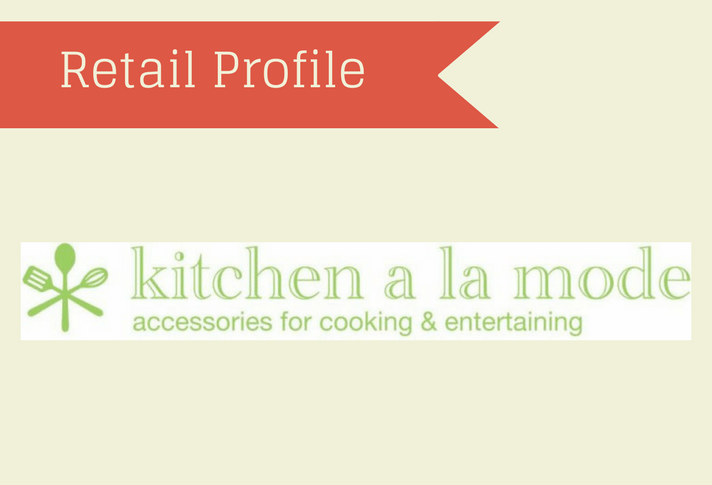 Many retailers use Facebook. Not so many enjoy using it, choosing to turn the medium over to tech savvy underlings or to outsource social media altogether. Ben Salmon of Kitchen a la Mode in South Orange, N.J., is a bit different and he doesn’t shy away from Facebook. In fact, he is not shy at all, “I definitely have fun on Facebook,” Salmon says.

Consider his Halloween posts, a Facebook tradition for Salmon now going on for nine years, this year featuring Ben, in chef’s whites, toting a cauldron full of candy. Like many small retailers, Salmon seeks his local groove and works with it and he says Facebook is the way his message gets delivered, providing a hip presence long before the customer arrives at the small store. And more importantly, sets the tone for the customer’s return.

“People want to see their local stores, and they want to see personality,” he says. And those customers see a lot of Salmon’s personality. He updates his Facebook feed often and he does it himself—this is not an outsourced task.

“I don’t hire my social media out,” he says. “I hire my accounting out.”

For instance, the Kitchen A La Mode webpage starts with, “Hi, Ben here,” and moves onto inviting consumers to “watch our crazy videos and generally hang out with us,” by liking the store on Facebook.  And customers find that is worth doing because they discover not just a listing of store events, but an interactive presence that helps build community.

“The people on my page view Kitchen a la Mode as someone on their friends’ list, not a presence trying to get their money,” he says. “It is a relationship. On Facebook they know it is me posting.” Or as his website says, “And yeah, we’re even known for the occasional shenanigans.”

That conversation smooths the relationship between the ether that is the internet and the solid brick and mortar of his 1,000-sq. ft. store. How is that knife you bought? Salmon might ask. Knife sharpening is the next step in that dance.

As Salmon puts it, ad dollars are best spent not on print media, but “On sponsored posts to Facebook. That five bucks goes so much farther,” than in local publications. But back to the knife sharpening.

“I posted about a sharpening and yesterday I had 55 knives come in,” he says about a pre-Thanksgiving post, adding that, “if you can get a customer in for a specific reason like knife sharpening, they will spend on something else while they are here. I can attribute thousands of dollars of sales to Facebook posts.”

Or you can try to sell canning jars by encouraging folks to “Press your face against some glass. Take a picture. Print it. Laminate it. Put it in a large jar. Put the jar in the fridge.” This was a Halloween post and featured an image of someone’s large face plastered inside a mason jar looking for all the world like he’d been embalmed. Though hard to decide whether the picture is a refreshing change from the cliché homemade marinara image or a disturbing world view, it does catch the eye.

His active Facebook presence also helps spread the word about local issues important to small retailers such as parking.  South Orange is a scenic and walkable location, not to mention close by a transit hub into Manhattan, but like many scenic downtowns, parking can be tough. While Salmon walks to work, he knows his customers don’t always and will need to transport what they buy to their homes. That is among the reasons he is active in his community.

“I am vice chair of the Village Center Alliance,” he says, noting that the group has helped South Orange keep the downtown shopping area pedestrian friendly.  (For example, the town got a state grant to raise drivers’ awareness that they actually do have to stop for pedestrians in crosswalks.)

Salmon also works with fellow retailers to support shopping locally on Small Business Saturday. “I believe in being the change you want to see,” he says. And that focus is part of his business plan, as his 1,000-sq. ft. store deals with big box competition.

“It not what I can do better than big stores, it is what I do differently,” he says. “I don’t have to plan my marketing a month in advance. I wrote today’s posts in my mind while I was in the shower this morning. In a big corporation that would have to go through a lot of vetting.”

From handing out Halloween candy to doing his own knife sharpening and posting incredibly interesting videos, Salmon strives for his own voice. Authenticity is his buzz word.

“The way I approach social media is something that I can do and they can’t and that is what gives me an edge. I can be myself,” he says, noting that by marketing on social media feedback is guaranteed. “If my customers don’t like it, they will tell me.”