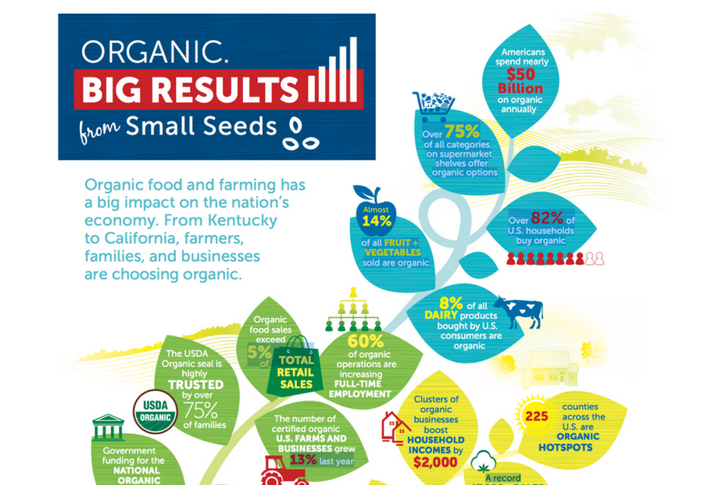 If you’ve thought you have heard more about organic this year, you have. Sales of organic everything, from produce to prepared foods to clothes are spiking. Organic is not just a category for hippies anymore. The numbers show it is likely your customers are shopping organic as well.

Organic sales in the U.S. for 2016 totaled $47 billion, up nearly $4 billion from the previous year according to the Organic Trade Association’s latest industry survey, a figure than includes $43 billion in organic food sales, the first time the organic food market broke the $40 billion mark. In fact, organic food now accounts for more than 5 percent of total food sales in the country and is continuing to rise. Organic foods sales increased by 8.4 percent, or $3.3 billion, from the previous year during a time when the overall food market rose a scant .06 percent.

The growth in the category means that organic product of some sort is in the kitchens of more than 80 percent of American households, according to the OTA survey.

And it’s not all coming from produce departments or the butcher counter: sales of organic condiments are also trending up. Organic dips (a category carried by many independent gourmet retailers) posted growth in 2016 of 41 percent over the previous year, with $57 million in sales. And sales of organic spices were up 35 percent to $193 million.

The growth is coming across the U.S., the trade group reports. The state showing the biggest year-to-year jump in households purchasing organic products was North Dakota, where 85.6 percent of households participating in the Nielsen study reported buying organic in 2016, up more than 14 percent from 2015.

Consumers are seeking out organic products for other areas of the home as well. Products from baby clothes to mattresses to kitchen textiles now are marketed under the organic banner: sales of non-food organic products increased by almost 9 percent to $3.9 billion. Sales of organic non-food products were up nearly 9 percent while overall non-food growth products grew 0.8 percent.

“The organic industry continues to be a real bright spot in the food and agricultural economy both at the farm gate and check-out counter,” says OTA’s CEO and executive director Laura Batcha.

And while produce has been the traditional entry point for consumers looking to buy organic, these recent numbers make it clear gourmet retailers who are not stocking organic condiments options or including SKUs of organic kitchen textiles in their assortments risk missing out on sales.