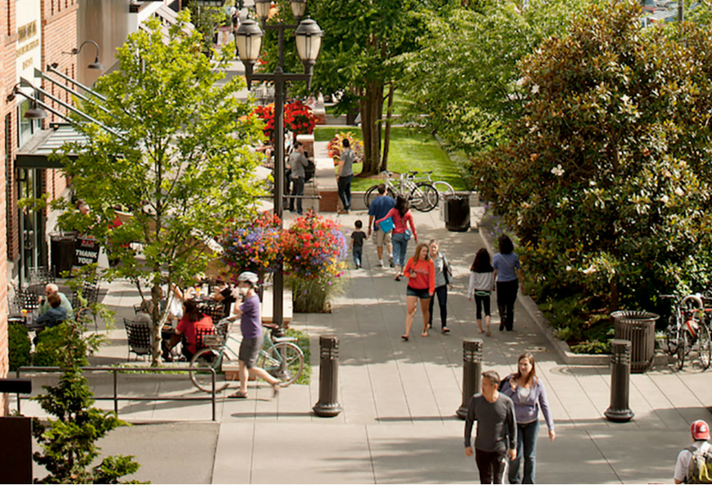 Just as consumers throw yard sales to rid their homes of unwanted clutter, so retailers throw sidewalk sales to rid their stores of merchandise that, for various reasons, is cluttering up shelves. It is an annual process especially embraced by independent retailers who don’t have to deal with corporate policies regarding pricing and discounting. Which is good, because most sidewalk sales offer extreme discounts that are like manna to shoppers looking for deals.

“This kind of event has the added benefit of drawing attention to your shop and attracting first-time customers inside,” says Ben Salmon, owner of Kitchen a la Mode in South Orange, N.J., who tries to do at least one, sometimes two, sidewalk sales a year. “I like to make sidewalk sales a part of something bigger. I will hold them with a downtown event, or in coordination with a few other shops.”

And sidewalk sales also are a beloved tradition for many towns and cities across the country, a tradition widely promoted by local Chambers of Commerce and merchants’ groups. The sales give stores a chance to raise their visibility within the community as well as offload some inventory, with shoppers coming back year after year in search of well-priced treasures.

“The sale is very important to us because it serves as a way to clear out old merchandise and merchandise that isn’t moving,” Pomp Lorette says. “It’s a garage sale for stores.” The store sets up a big tent and lines up tables filled with merchandise outside the front door. What’s not outside is the cash register.

Pomp Lorette and most other retailers interviewed for this article say they ring up sidewalk sales purchases inside their stores, rather than on the street, as a way to get customers to see the non-discounted merchandise. Retailers say they advertise the sales both individually and through various community associations.

Such outside advertising casts a wider net, retailers say, with the result that new shoppers stop by. “We hold an annual Downtown Sidewalk Sale that is jointly promoted and brings a lot of people into the area,” says Anne Dowell, owner of Apron Strings in Hutchinson, Kan.

In addition to plugging her sale on Facebook and in local newspapers, Martha Nading also advertises the event on a blackboard propped in front of her Greensboro, N.C. store, The Extra Ingredient, for a week prior, as a heads-up for shoppers who might want to reserve the date.

Getting approvals, either from landlords or town zoning boards is another piece of the puzzle. Steve Fricke, buyer at the family-owned Cooks’Wares in Cincinnati says his store was able to run sidewalk sales once the family decided to close its second Cooks’Wares location in Springboro, Ohio. The other store’s landlord did not allow sidewalk sales and Fricke found he could not advertise the sale at one Cooks’Wares without confusing customers who shopped at the other spot, as the stores were only 25 miles apart.

“We have a good mix of other tenants in our mall here so we talk amongst ourselves and figure out a date and do a sale on the same day, rather than have just one store setting up a table alone,” Fricke says. “The downside is that we are in a strip center and it is truly an outdoors sidewalk, so the weather is a factor.”

Indeed, unless sited in an indoor mall, weather is a factor for any sidewalk sale, anywhere. In Cincinnati, Fricke plans sales for spring and fall to avoid “the pop-up storms that plague the Midwest in the summer.”  In Greensboro, NC., Nading says temperatures are a concern. Going for festive appeal one year, she filled balloons only to watch them burst and wither in the heat. MaryLiz Curtin says a sidewalk sale at her store Leon & Lulu, in Clawson, Mich., “worked well as a community event, and added a little pizazz….until the rain came.”

While sidewalk sales are where dated inventory goes to die (or be sold), many retailers say they also work with vendors for good deals on enticing products they can offer as a lure on sidewalk sale days. “I always look for closeouts to increase my offerings at a sale and improve the margins,” says Curtin.

“We occasionally do special buys of product, but the discount needs to be really deep in order for it to work for us,” says Pomp Lorette.

“Sidewalk sales are a great opportunity to liquidate any extra clearance items, samples, minor defects or overstocks. I will also sometimes make opportunity buys to feature at a sidewalk sale,” says Salmon.

“A lot of it is clearance,” Nading says of the merchandise she puts out for sale, “but we also buy if there’s a closeout from a vendor or a salesmen sample, that kind of thing. Sometimes things are rock-bottom cheap because it is time for them to go away.”

The bottom line though, is the bottom line. Discounts matter at sidewalk sales. There is little concern that a customer might think less of a store because the pricing is lower and the products less than fresh.

“We spend the week or so before going through sales reports to determine what products aren’t moving,” says Pomp Lorette. “We also send stuff to our warehouse throughout the year–end of season stuff, odds and ends, one-of-a-kinds. We don’t mess around–everything is discounted at least 30-40%, most more. We continue to mark things down further throughout the four-day sale.”

Organizing the sale is also an issue, says Salmon. “Do you group things by price or percentage off? I like to have a $2, $4-6 and $10 table, depending on the merchandise I have. I’ll also have a section with 50-75% off.”

Though tables on a sidewalk seem vulnerable, few retailers said they found theft to be no more of a problem than usual during outdoor sales days, although most assign staff members to watch the tables for shoplifters. Some are concerned that the items won’t be taken.

“The tables are manned, so there is no big worry about theft,” says Curtin, “but the truth is by the time stuff is out there, I really don’t care. I just want it gone.”