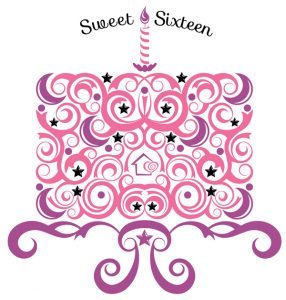 Six award-winning James Beard celebrity chefs from around the nation will be preparing their signature specialties for a once-in-a-lifetime dinner during the 16th Annual Housewares Charity Foundation (HCF) Gala, Monday, March 4, at the Hilton Chicago.

Participating in this unique culinary experience will be Hugh Acheson of Five & Ten; Rick Bayless of Frontera Grill and Topolobampo; Sarah Grueneberg of  Spiaggia; Emily Luchetti of Farallon and Waterbar;  Maricel E. Presilla of Cucharamama, Zafra and Ultramarinos; and Jacques Torres of Jacques Torres Chocolates. Acheson, Bayless, Grueneberg and Presilla will each prepare an appetizer and entrée for their quadrant of the ballroom, and Luchetti will make dessert while Torres prepares bonbons.

Honorees for this year’s gala are: Kathryn Bufano, president and chief merchandising officer of Belk, who will receive the Lifetime Humanitarian Award and Keith Jaffee of O2 Cool, who will receive the Humanitarian of the Year Award. The event will benefit The Breast Cancer Research Foundation (BCRF), the HCF’s legacy charity. The HCF board also has directed that contributions be made to two charities in the aftermath of Hurricane Sandy: the American Red Cross Disaster Relief Fund and Long Island Cares, Inc.—The Harry Chapin Food Bank. The gala is held annually in conjunction with the International Home + Housewares Show.

To reserve seats for the 2013 HCF gala, contact Paul Murphy at 508-272-0717, visit the website at www.housewarescharity.org or make reservations onsite at the Show Store on Level 2.5 of the South Building. 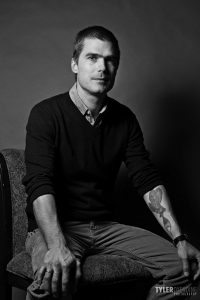 Hugh Acheson is the chef/partner of Five & Ten and The National located in Athens, Ga., and Empire State South in Atlanta.  Born and raised in Ottawa, Canada, he started cooking at a young age and decided to make it his career after realizing that academics weren’t his thing.  At age 15, he began working in restaurants after school. Today, Acheson’s experience includes working under Chef Rob MacDonald, where he learned stylized French cuisine at the renowned Henri Burger restaurant in Ottawa; in San Francisco as the chef de cuisine with Chef Mike Fennelly at Mecca; and later as opening sous chef with famed Chef Gary Danko at his namesake restaurant. Taking these experiences, Hugh developed a style of his own—forging together the beauty of the South with the flavors of Europe and opening the critically acclaimed Five & Ten in 2000, The National in 2007 and Empire State South in 2010. Author of “A New Turn in the South,” which won the award for Best Cookbook in the field of “American Cooking” by the James Beard Foundation, Acheson has earned a great deal of recognition for his fresh approach to Southern food, including Food & Wine’s Best New Chef, the Atlanta Journal Constitution Restaurant of the Year, a five-time James Beard nominee and 2012 winner for Best Chef Southeast. In 2010, Acheson competed on Season 3 of Bravo’s “Top Chef Masters” and in 2011 he returned to the hit show as a judge on “Top Chef” for Seasons 9 and 10. 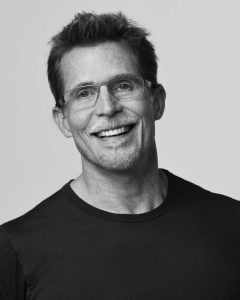 Most people know him from winning the title of Bravo’s “Top Chef Master,”beating out the French and Italian with his authentic Mexican cuisine. His highly rated on-going Public Television Series, “Mexico—One Plate at a Time,” can be found on television sets coast to coast, and his seven award-winning cookbooks are just as well known.  In 2012, Bayless was nominated for a Daytime Emmy for “Best Culinary Host.” His side-by-side award-winning restaurants in Chicago were founded in 1987: the casual Frontera Grill and the 4-star Topolobampo. In 2007, Frontera Grill was named “Outstanding Restaurant” by the James Beard Foundation. More recently, Bayless opened his third restaurant—XOCO—a quick-serve LEED certified restaurant featuring house-ground chocolate and wood grilled tortas. This year, Tortas Frontera opened in Chicago’s O’Hare Airport and in downtown Chicago. On the local front, Bayless and his staff began the Frontera Farmer Foundation in 2003 to attract support for small Midwestern farms.  Each year, grants are given to local farmers for capital improvements to their family farms. Bayless has won James Beard awards for “Midwest Chef of the Year,” “National Chef of the Year” and “Humanitarian of the Year.”  His latest book, Fiesta at Rick’s, spent the summer on the New York Times bestseller list. 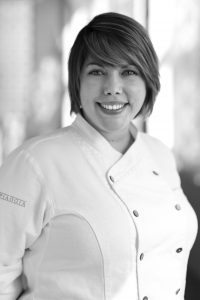 Sarah Grueneberg developed a love for the culinary world as a small child.  Raised in Houston, she spent much of her time cooking and baking with her grandparents while her mother traveled for work.  Her passion for exploring flavors and new cuisines grew from her German heritage as she made sausage, cinnamon rolls and wild berry pies. In the fourth grade, she created her own restaurant called Taste of the World under her school’s bleachers. In 2005, Grueneberg joined the award-winning team at Spiaggia, Chicago’s only four-star Italian restaurant, helmed by Chef Tony Mantuano, a 2005 James Beard Award winner. With just a brushstroke of experience with Italian cuisine, she started on the line, was promoted to purchasing sous chef, then to chef di cucina and finally to executive chef in 2010. Her growing knowledge of Italian food, culture and language has enabled her to create one-of-a-kind experiences for Spiaggia guests.  Grueneberg has been covered in The Wall Street Journal, Wine Enthusiast, Chicago Tribune and Chicago Sun-Times among other outlets.  In 2010, she was named one of Chicago’s Rising Star Chefs by Chicago Social magazine and was named Chicago Chef of the Year in the 2011 Eater Awards.  She competed against 28 other cheftestants to make it to the finals of Bravo’s “Top Chef:  Texas,” where she was named the runner-up in February 2012. When not cooking at Spiaggia, Grueneberg can be seen teaching Spiaggia cooking classes, leading demos at the Green City Market, practicing her Italian and exploring Chicago’s vast culinary world. 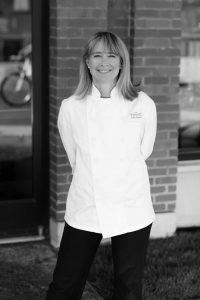 With six cookbooks to her credit and numerous awards, Emily Luchetti has been the executive pastry chef at San Francisco’s Farallon since its inception in 1997 and at Waterbar since it opened in 2008. After attending culinary school, working in a few restaurants in New York and staging in France, she moved to San Francisco and joined the opening culinary team at Jeremiah Tower’s legendary Stars restaurant. Three years later, she made the switch to the sweet side of the kitchen and has never looked back.  She was the pastry chef at Stars for eight years and also co-owned the retail bakery StarBake. Luchetti is the author of several books including “Stars Desserts,” “Four Star Desserts,” “A Passion for Desserts” and “A Passion for Ice Cream.”  Her honors are numerous and include the 2004 James Beard Foundation Award for Outstanding Pastry Chef.  Chosen by the San Francisco Chronicle as one of the 20 Visionary Chefs in the Bay area, Luchetti was inducted into the Culinary Pioneers of America, was named a dean of the International Culinary Center, and, in 2012, was inducted into the James Beard Foundation Who’s Who of Food & Beverage in America. Over her 20-year career, her recipes have appeared in Oprah, Food & Wine, Bon Appetit, Every Day with Rachael Ray and Good Housekeeping magazines. Luchetti has served on the James Beard Foundation Board of Trustees for six years, four years as the chair of the James Beard Awards Committee and currently as chairperson for the Board of Trustees. 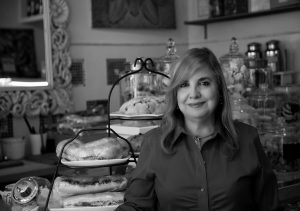 James Beard Award winner Maricel E. Presilla is a culinary historian specializing in the foods of Latin America and Spain. She holds a doctorate in medieval Spanish history from New York University and has received formal training in cultural anthropology. Presilla has done considerable research on Latin American agriculture—with special emphasis on tropical crops, cacao and vanilla agriculture and chocolate production. She is the president of Gran Cacao Company, a Latin American food research and marketing company that specializes in the sale of premium cacao beans from Latin America.  Author of “Gran Concina latina” and “The New Taste of Chocolate,” she has also contributed articles for Saveur, Food & Wine, Food Arts and Gourmet. She writes a weekly food column for the Miami Herald and is as comfortable sailing down the Orinoco to collect recipes in the field as she is cooking at Cucharamama and Zafra, her pan-Latin restaurants in Hoboken, NJ.  Last year, Presilla opened Ultramarinos, a Latin American store and cooking atelier, also in Hoboken, where she sells Latin ingredients, prepared foods, premium chocolates and Blue Cacao—her own line of truffles with Latin flavors. 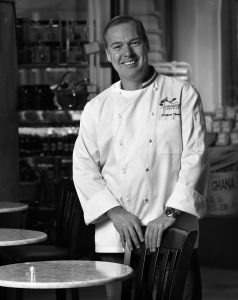 Fondly referred to as Mr. Chocolate, James Beard Award winner Jacques Torres is the authority on all things related to this confectionery delight. Through his early years as a pastry chef, he developed a deep affinity and passion for chocolate. Raised in France, Torres fulfilled his American dream in 2000 with the opening of his first chocolate factory, Jacques Torres Chocolate in the DUMBO neighborhood of Brooklyn, N.Y.  He was a pioneer—the first artisan chocolatier to start from cocoa beans to make his own chocolate.  Torres specializes in fresh, hand-crafted chocolates using premium ingredients free of preservatives and artificial flavors.  In 2004, he opened his second chocolate factory and flagship store, Jacques Torres Chocolate, in downtown New York City on Hudson Street. Today, he produces and sells his chocolates and other high-end confectionery products at his two workshops and retail-only boutiques on the Upper West Side, Chelsea Market and Rockefeller Center—all in Manhattan. For 11 years, Torres worked at NYC’s most famous restaurant—Le Cirque—and served presidents, kings and celebrities. The recipient of the prestigious M.O.F. medal, Torres has written acclaimed cookbooks, hosted a television series and proudly serves as Dean of Pastry Arts at New York’s The French Culinary Institute.  He generously donates his time to many national charity organizations and has a deep love for children and dedication to causes that support their well-being and happiness.