Michelle Hespe speaks to Jean-Luc Colonna d’Istria, Executive Vice President of Merci in Paris. The impressive retail store was one of six Global Honorees at the 2014 gia Global Innovation Awards in Chicago, held during the International Home + Housewares Show.

Since 2009, fashion, design and food lovers have been drawn to a store that has smoothly forged ahead in an area of Paris that was never really a retail destination. It was originally a residential area, and yet Merci, housed in a 12,000 square foot light-flooded New York style warehouse space that was once a wallpaper showroom, blends grandness with Bohemian chic and fits into the funky Beaumarchais neighborhood, as if it has always been there.

At Merci, there are no windows facing the street, so there are no upfront window displays to give it a leg-up. Rather, the focus is on a central atrium and courtyard that not only lets the natural light flood in to highlight the floorboards and exposed ceiling beams and brick walls, but also makes the windows appear as artworks – gardens and the outdoors framed against Parisian skies. And among it all are three cafés and restaurants that allow customers to sit and relax while enjoying an exceptional shopping experience, taking in the beauty of the building and its many wonderful offerings. It’s a true artist’s space, something that Parisians, who love stylish home and housewares, hold in high regard. Merci inhabits the space beautifully, showcasing classic designs while also placing new designers firmly in the limelight.

Today, over one million visitors stream through Merci’s doors every year, achieving an astounding $23 million turnover. That’s an incredible result for a company that does not spend money on advertising, but instead focuses on a tight PR strategy and word of mouth to make things happen. Merci’s 25,000 Facebook followers alone generate enough publicity to keep the cash registers continually in action. The company also backs things up with Facebook/Twitter/YouTube events and promotions; live product demonstrations and product sampling. To add to this, the Merci e-shop was launched in 2013 and now represents 8 to 10 percent of the offline turnover. And the key difference with Merci’s promotional approach is that, as the company says, “everything is based on storytelling, rather than price promotions.” That is not a surprising approach, considering that the store could be the backdrop to a fairytale, with its expansive windows and leafy garden courtyard.

Despite being so chic, the judges and Expert jury at this year’s gia loved the warm, homely atmosphere and design of Merci, which is exemplified by the absence of traditional retail fixtures. Instead, it features vintage pieces of furniture and objects such as old chandeliers and large wooden tables made for sharing and display, which ignite the spaces with a stylish bohemian feeling. It keeps the customers coming back as they feel welcomed, undoubtedly with wistful moments of wishing that they lived in the old wallpaper showroom themselves. 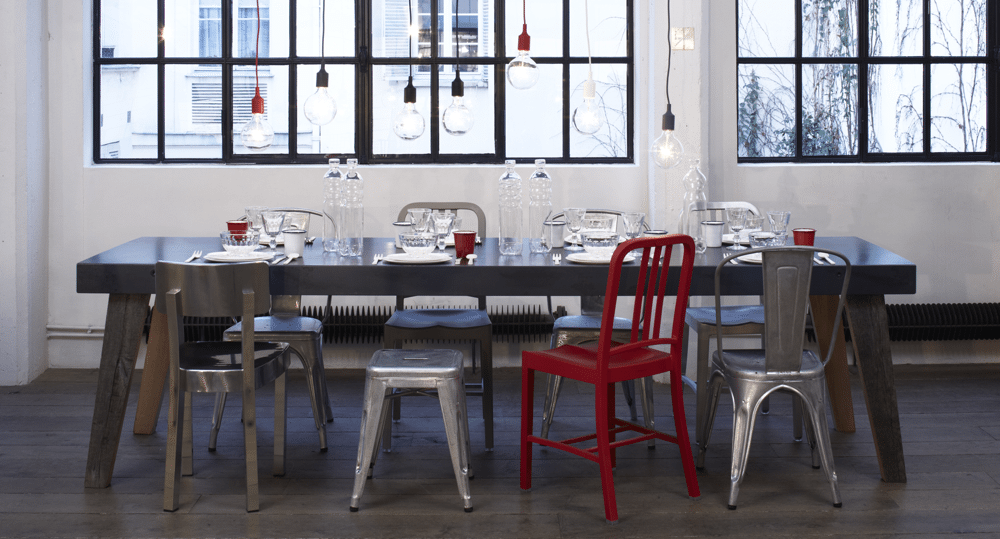 Jean-Luc is aware of the love that many have for Marci, but like most retailers, he is also often just too hard at work to sit back and reflect objectively on his business, let alone assess it’s operations. “I think gia and the exchange in Chicago with other international retailers helps a business to assess what they are doing, and to look closely at the specifics of a company,” he says. “Fast-paced retail operations are so time consuming that you never take the time out to write or describe to others what you are actually doing.”

gia gave Jean-Luc and his staff a chance to sit down and document what they have been doing in the last five years, and to think about where they are headed. The experience of becoming a gia winner in his own country and then travelling to Chicago to check out the US home and housewares scene also gave Jean-Luc a great chance to compare aspects of Merci to other retail businesses around the world. “Being in Chicago and sharing experiences with other retailers has been very interesting,” he says. “I certainly gained a better understanding of what kitchenware retail is all about in the US market. I am not a pure player in the kitchenware category, so it is interesting to discover and learn about the expertise of the long time players of this game.”

On the night of the gia awards dinner in Chicago, when the presenter announced Merci as a Global Honoree alongside five other retail stores from around the world, Jean-Luc was incredibly pleased. “It was a real satisfaction to learn that after just five years of business, Merci was already well-known by my international colleagues,” he says.

For now, Jean-Luc is back in Paris with his colleagues, ready to set themselves on a path to other great goals for Merci as the company reaches its 5th “The exchange with other nominees in the awards, and the jury experts, were the most inspiring thing about the gia experience for me,” says Jean-Luc. “And being in Chicago, I learned that all the local markets are so different and that there is no one great solution to answer customer needs.”

As Jean-Luc continues to develop the company and the brand, after gia there is one thing for sure. “We will come back to the International Home + Housewares Show in Chicago because I believe that benchmarking your own business against the US market is a necessity for European retailers,” he says. “Sourcing is global, but retail culture remains local.”

For more information about the gia (Global Innovation Award) program, the co-sponsors, or participating in 2014-2015, contact Piritta Törrö at piritta.torro@inspiredconnection.fi. Additional information on the gia program is also available online at www.housewares.org/gia.

For more information about the International Home + Housewares Show and to pre-register for the 2015 Show, taking place in Chicago on March 7-10, 2015, please visit www.housewares.org.