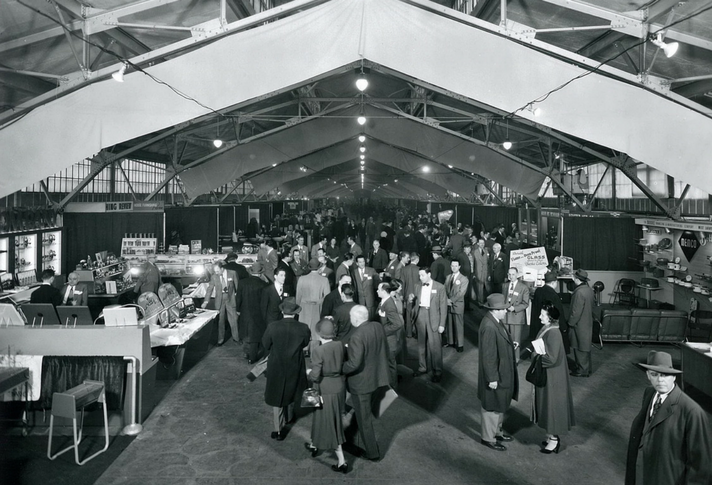 This post is one of a three part series. Read part one: From Hotels to McCormick Place: A History of the International Home + Housewares Show – Part 1

As soon as possible after World War II ended, manufacturers accelerated their return to civilian production, reissuing long-awaited (through pre-war) models into consumers’ hands. Though enamelware, toasters, percolators, and woodenware were still on allocation, ferocious demand and buyer pressure clamored for more new goods, which began to appear in 1947. The trade press reported that “housewares were reasonably priced, but competed with high-priced food, which people must have, and high-priced automobiles, which they insist upon having.”

By 1948 Americans were spending $1.5 billion for housewares and small appliances. (By comparison, 12 years later in 1960, NHMA estimated $5 billion in retail housewares expenditures.) New companies and new technology and inventions led to waves of housewares product innovation. It was a seller’s market, and buyers routinely grumbled about firm prices.

The Housewares Show grew swiftly. Exhibitors continually strained to expand their booth space, and would-be exhibitors battered at the doors. To accommodate the growing number of companies, the Show moved to Chicago’s Navy Pier in 1949. At this time Navy Pier housed the Chicago campus of the University of Illinois, established in 1946 as a two-year program to educate the large number of WWII veterans eager to start their new lives with the help of their GI Bill benefits. The Pier’s commercial activity shared space with some 4,000 students, not a comfortable situation for the college or the young Association, but the housewares trade adapted itself to the building and its limitations. All the same, there was time for fun in addition to business. Glamorous variety shows at the Palmer House, stag dinners, banquets, dances and bowling tournaments enlivened the trade show during the Navy Pier years.

By 1949 the Housewares Show was an international marketplace hosting buyers from 11 countries. The Housewares Show narrowed its product categories, terminating the major appliance segment and changing its name from the “National Housewares and Major Appliance Exhibit” to the “National Housewares and Home Appliance Manufacturers Exhibit” in 1950. The 1950 event saw a greater number of new products, although many manufacturers still had not invested in new tooling. Uncertainties caused by the Korean War created a flurry of orders for products made of steel and rubber. Some cookware manufacturers were out of stock or were rationing orders. The situation tightened in 1951, with some exhibitors attending the Atlantic City Show for goodwill rather than because they had new products to display. Impending price freezes, new taxes, aluminum and steel restrictions, lack of shopping cartons and unknowns regarding military priorities caused confusion. Once again, the Show’s primary importance was its abundance of personal contacts.

With new venues rapidly opening across the country, retailers realized that housewares built sales volume and traffic. So many new housewares manufacturers entered the industry that many companies could not be accommodated at the Show. The press reported that some exhibitors there were building “elaborate exhibits costing $10,000-15,000.” At the Pier, television was used for the first time to display the exciting colors of the new plastic products.

In 1956 no more than 649 exhibitors could fit into Navy Pier. The limitations could only be solved when the Show moved into Chicago’s new exposition center, McCormick Place on the Lake, in 1961.

Continue reading part three of the series:
A History of the International Home + Housewares Show: From Hotels to McCormick Place – Part 3