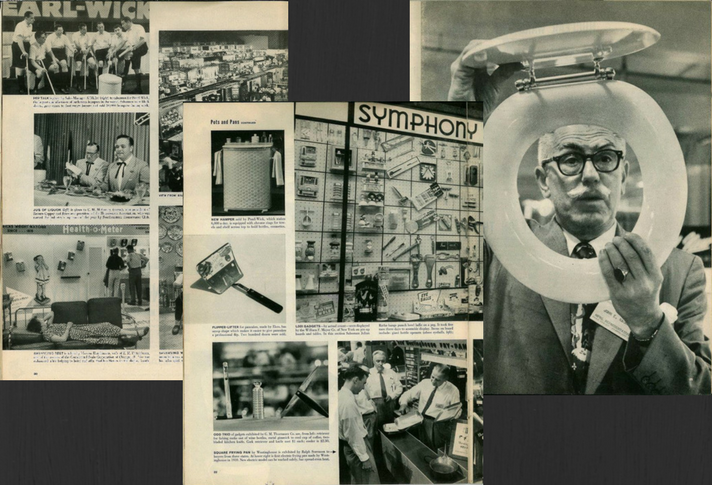 This is part two of a two part series. Read part one:
There’s No Business Like Show Business! Part 1 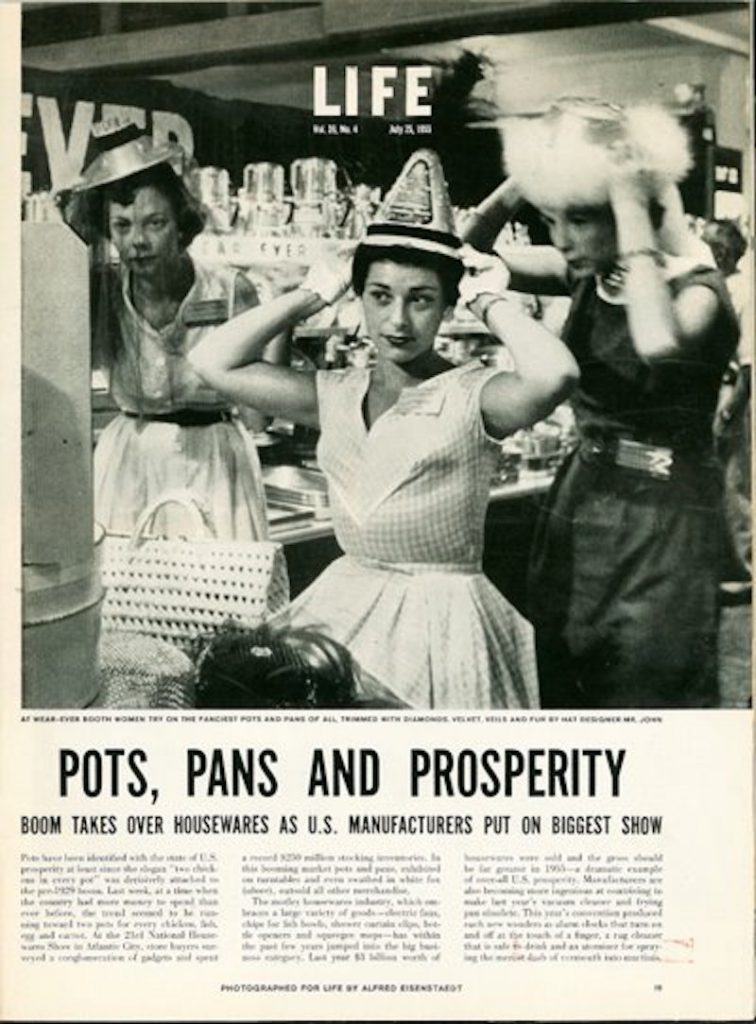 From 1939 to 1991, the National Housewares Manufacturers Association (NHMA), based in Chicago, mounted two shows per year. For nearly 40 years, its national housewares shows (with names that changed over the decades) were held in January in Chicago and in July on the East Coast, often at the popular ocean side boardwalk in Atlantic City, New Jersey.

In July 1955, the 23rd National Housewares and Home Appliance Manufacturers Exhibit took place at the Atlantic City Auditorium. The Show ran from 9 a.m. to 5 p.m. on Monday, July 11 to 9 a.m. to 2 p.m. Friday, July 15. On Tuesday night, the Annual Summer Housewares Show Party at the Traymore Hotel began with cocktails at 6:30 p.m., followed by dinner and entertainment, with dancing till 1 a.m (!)  Buyers came from every state in the U.S., from Hawaii (not yet a state), Canada, Australia, New Zealand and Europe—7,500 of them, the largest number ever to attend this housewares show. Salesmen set up shop on three floors of the convention hall, with 554 booths covering 3.5 acres.

The Show described in the article below offers valuable comparisons to the consumer product trends presented at the 121st International Home + Housewares Show in March 2018 and the global economic challenges faced by today’s housewares industry.

The weekly LIFE magazine, America’s most popular family magazine, was the benchmark for photojournalism since its premier in 1936. By today’s standards, the seven-page feature that appeared in July 1955 was a public relations coup. In a media environment with only a handful of television stations and magazines with national reach, the story (illustrated by the legendary photographer Alfred Eisenstaedt) presented the vibrant housewares industry to millions of U.S. homes, a huge audience of potential purchasers.

Growing post-World War II families were outfitting their new suburban homes with countless American-made products. This decade set rising economic expectations for “The American Dream.” An editorial in the issue stated, “The miraculous U.S. boom has now pushed our national income above the $300 billion mark (annual rate) for the first time in history. So far, 1955 has been a record year in employment, spending and investment.”

Describing the excitement of the Show, the article stated “Last week, at a time when the country had more money to spend than ever before, …store buyers surveyed a conglomeration of gadgets and spent a record $250 million stocking inventories … The motley housewares industry, which embraces a large variety of goods—electric fans, chips for fish bowls, shower curtain clips, bottle openers and squeegee mops—has within the past few years jumped into the big business category. Last year $3 billion worth of housewares were sold and the gross should be far greater in 1955—a dramatic example of over-all U.S. prosperity. Manufacturers are also becoming more ingenious at contriving to make last year’s vacuum cleaner and frying pan obsolete. This year’s convention produced such wonders as alarm clocks that turn on and off at the touch of a finger, a rug cleaner that is safe to drink and an atomizer for spraying the merest dash of vermouth into martinis.”

In 1955, housewares products enjoyed high demand in a business dominated by regional department stores and manufacturers. Now, TV shows from the 1950s appeal to young audiences, products of that decade are considered retro cool and mid-century modern furnishings inspire interiors. Yet many of the hottest new gadgets of nearly 60 years ago sound remarkably similar to our current novelty gifts and problem-solving tools. The July 1955 Show included a metal cylinder used to cool a cup of coffee; exhibitors at recent Shows introduced ice cube alternatives made of stone, metal and plastic. Kids’ cookware and baking tools are very popular today; in 1955 Revere offered miniature versions of Mom’s pots and pans that Baby Boomers could use for actual cooking. Air circulators influenced by aircraft designs fanned buyers. But a ladle that weighed food with a built-in scale didn’t carry much weight with retailers. In 2018, it’s possible that exhibitors might debut “smart” tools that measure calories, as well as the weight of ingredients, for the today’s health-conscious consumer.

As today, news reporters looked for offbeat products and entertaining views of a big business. The story featured a “Big Buyer” and closed with a top salesman, framed by a toilet seat halo. 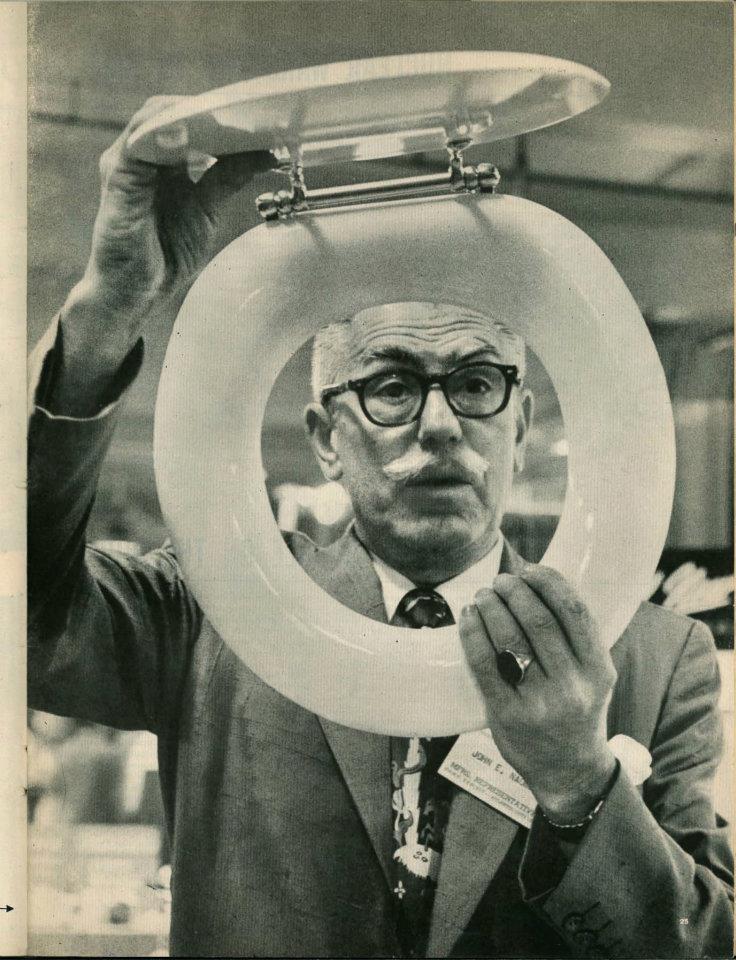 Today, the International Home + Housewares Show serves exhibitors and buyers who come from more than 100 countries to offer and select  innovative new products in many categories. Since that July 1955 Show, we’ve grown from 554 exhibitors to more than 2,100 companies who in March 2018 will “set up shop” in three vast buildings at McCormick Place, in our hometown Chicago. Hope to see you there.

You can find more images from the LIFE feature on our Facebook page in the Housewares History album. To see larger versions of the images above simply click on them!