Volcanic Eruption in Iceland Disrupts European Air Travel – Who could have predicted that headline?  Of all the things that could go wrong, that certainly would have been the last on my list.

For fairs in Asia, the timing could not have been worse.  Traffic at the Hong Kong Houseware Fair and at the BIH/BIG fairs in Bangkok was down significantly without the Europeans making their annual pilgrimage to the Asian sourcing fairs.  Being there, the missing Europeans were obvious with aisles not nearly as full as expected.  Some exhibitors were also absent, with empty booths displaying a lonely notice about the volcanic ash situation. 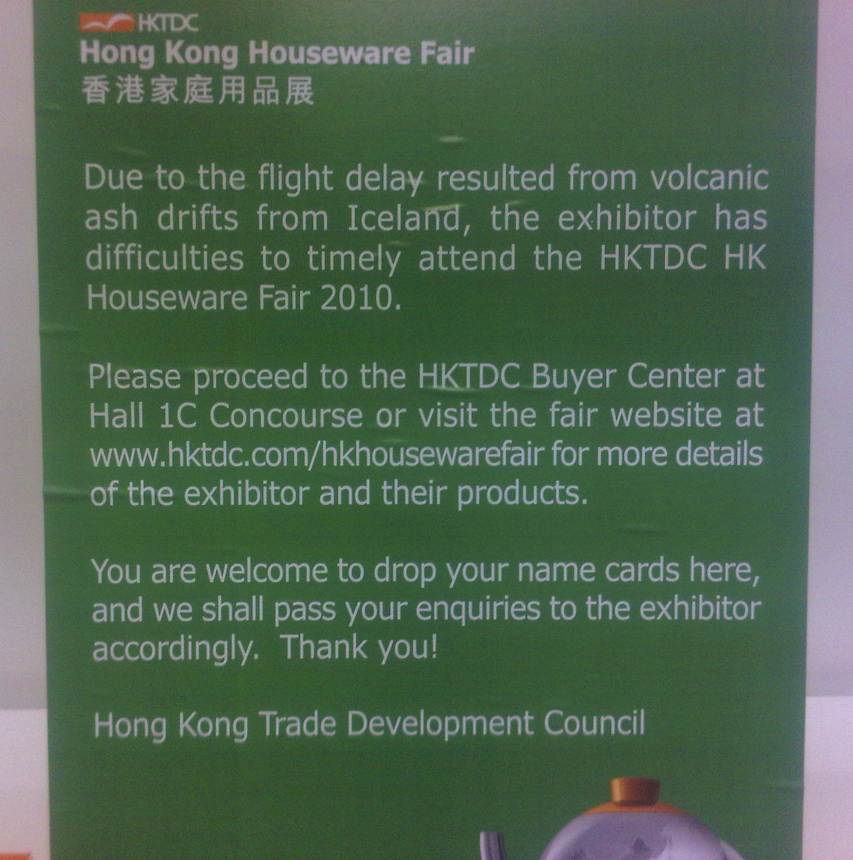 When you did see Europeans, each had a story of why or how they ended up in Asia.  On the first two fair days, the stories were that they were already in Asia before the volcanic eruption and wondering if and when they might return home.  Matthew Canwell of British retailer Lakeland hoped to extend his visit by a few days to cover work normally done by his business colleagues who were still grounded back in England.  To that request, the airline indicated that if he did not take his regularly scheduled flight, May 5 was the next time he could return to the UK, two full weeks later.

On the final days of the fairs, some Europeans did finally arrive but told stories of long and exhaustive trips.  With the Canton Fair being of upmost importance, and with the fortunate timing of starting several days after Hong Kong and Bangkok, Pasi Sivonen and Nina Rantanen of Finish retailer Day traveled for 15 hours from Helsinki by train to Moscow, and after a long 12 hour layover, boarded an Aeroflot flight destined for Bangkok.  After a five-hour layover, their Air Asia flight finally took them to Guangzhou via Hong Kong – total time from home to hotel was 54 hours!  You have to admire that type of dedication!

With these bumps and bruises, life goes on and global sourcing continues.  Hopefully in the weeks, months and years to come, even with all of the lost luggage, jet-lagged nights and now one notorious volcano, we’ll look back at these times as adventures – the type we’ll one-day tell our grandkids about.