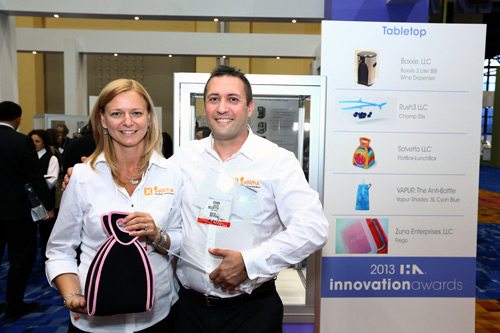 The  2014 International Home + Housewares Show will feature the winners of the 3rd annual IHA Innovation Awards. From thousands of new products on view at the Show, 13 products are named the Best in their categories. Products selected as winners can be entered by large companies or startups. The innovation and design is what matters!

We tracked down some of the 2013 Best in Category winners to learn how the award affected their products’ launch.  Exhibitors reported that relationships with major retailers and valuable media coverage developed within the first months after the Show.

Rita Floyd-Vester, a Coral Springs, Fla., teacher and mother of three, knew that lunchboxes get dirty and that school cafeterias are a picnic for bacteria. “I noticed that when a child got sick at school, very soon a few more followed. I did some research and learned that despite hand sanitizers now in use, it’s not the door knobs or water fountains that are totally to blame,” Rita explains. “The germiest place in a school building is the cafeteria table! Even though tables are cleaned and disinfected, dirty conventional lunchboxes are placed right on top of the 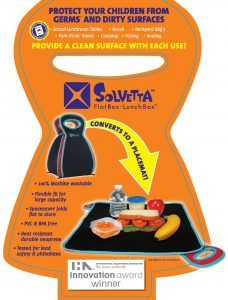 So…..Rita and her husband, Csaba Vester, created the Solvetta™ FlatBox-LunchBox™, a machine-washable, neoprene-polyester lunch carrier that converts into a placemat for a clean surface for eating at school, office or outdoors.  They made their first prototypes from old dishrags and shirts. Then Csaba realized that adding four zippers was the key to the design – a shape that could unfold to become a flat surface. Not only did these experiments take over their lives at home, they enlisted Csaba’s mother in Hungary to sew some prototypes. Then they put the samples to the ultimate test: children in kindergarten through 8th grade used them in the school cafeteria! In 2012 the Vesters applied for a provisional patent and contacted some major lunchbox makers in the U.S. When no companies expressed interest, Rita and Csaba decided to risk it and take a booth at the 2013 International Home + Housewares Show.

The FlatBox-LunchBox™ won Best in the Tabletop category, which befits the product that assures a clean tabletop.

“I knew it was a good idea, says Rita, “but when we won the Innovation Award, judged by retailers, industry experts and designers, I knew we had a winner!” Attendance at their South Building booth was
“overwhelming,” says Csaba Vester, Solvetta LLC’s cofounder. “Buyers, distributors and media mentioned that they saw our FlatBox-LunchBox™ in the award display and came straight to our booth.”

Csaba continues, “Often buyers were lining up to learn about our new invention. National and international large retail chains and distributors came calling. Some wanted to order a couple thousand lunchboxes; some wanted them by the container load. Other companies wanted to license the product and bring it to market themselves.”

Show news coverage drew more interest: The FlatBox-Lunch Box™ was mentioned in a New York Times article and appeared on FoxChicago news. Appearances in Good Housekeeping, many blog mentions and the DIY Network’s I  Want That show followed.

Solvetta used the IHA Innovation Award logo on their product packaging, on their websites www.Solvetta.com and www.Flatbox-Lunchbox.com and it appeared in their May/June Kickstarter campaign, which successfully exceeded their 30-day funding goal. This revenue allowed them to move more quickly with their next development phase. By October, they had signed with Northern Response, a distributor in Canada that serves 90 countries, and contracted with TPI for entering the electronic media market.

“Our online stores received orders from 20 countries and probably every state in the U.S.,” Rita adds. “The products are sold online at Fenigo.com, ReUseIt.com and Amazon and at several independent retail stores, and we are finalizing several large contracts and working on licensing agreements.” They now offer The Flatbox-LunchBox™ in three sizes and many color combinations.

“Being at the Show and networking with distributors and buyers was a great way to introduce the FlatBox-Lunch Box™ to the thousands of buyers. That’s why we are coming back in 2014! Winning the Innovation Award really set our brand, Solvetta, apart from the other lunchboxes that are on the market today,” Rita remarks. Indeed it has been a remarkable year for this inventive couple and their unique lunchbox.

It’s Your Turn to Win

Winners receive a dramatic award trophy to display in their booths and the right to feature the IHA Innovation Awards logo on their packaging. But the greatest benefit is the attention from media and buyers at the Show. You have to enter to win!