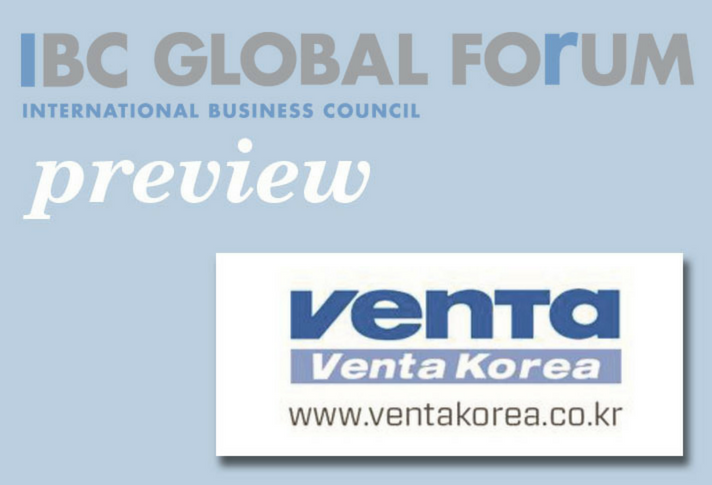 As a preview to their presentation during the upcoming IBC Global Forum, the following is a brief on Mr. Kim Dae-Hyun and his distribution company, Venta Korea.

The South Korean economy has been ranked 4th largest in Asia and 11th in the world and has consistently demonstrated remarkable growth and development.  South Korea has very low unemployment and has been called one of the fastest-growing major economies of the next generation, offering notable opportunities for suppliers offering products to satisfy the appetite for western products in this Asian market.

With nearly 30 years of operation in Soul, Venta Korea puts its motto, “Create a healthy and happy life style with the world’s best products for the Korean people.”, at the forefront of their business.  Prior to founding Venta, Mr. Kim began Jin-San Company, which managed Whirlpool services in Korea.  In 1994, the company began importing product from Germany, marking their foray into sales and trade of globally branded product within the Korean market.  At this point, Venta began developing its own line of bakeware products and with an aim of creating a home baking culture in Korea.  Shortly after, Venta Korea began working closely with Wilton Brands, importing and distributing their line of products throughout the market.  Using its expertise in brand marketing, Venta Korea has expanded on its lines and has started to introduce numerous product categories to the Korean consumers through both the brick and mortar and online retail channels.

Partnering with Ms. Sora Lee, Mr. Kim will present information on what products suit the Korean consumer and how Venta Korea serves as a distribution link between brands and retail within Korea, maintaining its goal to achieve sustained growth in the pursuit of profit while increasing community involvement under the slogan, “Living with society, living with enterprise.”