Harumi Kurihara, known as the “Martha Stewart of Japan”, was kind enough to meet with IHA reps recently and discuss the landscape of housewares in Japan. Harumi is a TV/multi-media chef celebrity in Japan, starring in her own TV programs as well as authoring many cook books and magazines. She owns many stores and restaurants in Japan and also has a line of cookware named after her.

Harumi took some time out of her busy schedule to answer some questions and give us insight into her world. We’ve seen how housewares celebrities here in the USA have come to be, now learn how it happens in another culture:

IHA: When did you start your career?

Harumi: Since I was 36.  My husband was a TV newscaster at that time, and one of my husband’s co-workers asked me to work for a TV program.  In 1983 for the first time I started to work as an assistant for a cooking TV show. This experience made me what I am now.

IHA: How many cookbooks have you published?

Harumi: 112 books.  They have published more than 22 million copies.   Mainly I publish the quarterly magazine “haru_mi” which is the first personal magazine in Japan.   It introduces cooking recipes as well as interiors, gardening, and other things to make your life enjoyable with my free-wheeling and creative ideas.

IHA: Do you have English cookbooks? 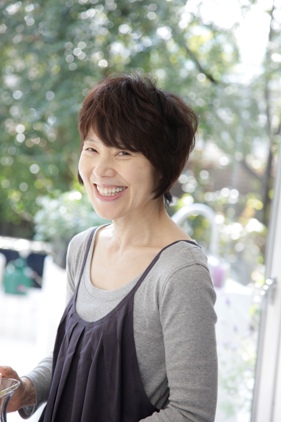 IHA: What kind of recipes do you introduce?

Harumi: My recipes are based on Japanese home cooking.   The recipes I have introduced over the years have come out of my love for my family and my wish “to make delicious meals for them.”

IHA: What Japanese food would you like to introduce to a foreigner?

Harumi: I would like to spread Japanese cuisine not only to eat at the Japanese restaurant but also to enjoy Japanese cooking at home.

People often ask, ‘What do I do about finding miso and things like that?’   But I would like to say ‘As a first step, please try it with soy sauce’.   I know it is hard to get all kinds of Japanese ingredients in a foreign country.   If you have a soy sauce, you can enjoy Japanese cooking.

IHA: Do you currently appear on TV?

Harumi: I have introduced several of my recipes on TV programs in Japan. Currently, on the cooking program “Your Japanese Kitchen” (NHK World TV) which started in 2007, I am introducing Japanese home-cooked recipes in English. This show is broadcast in about 80 countries and regions via broadcasting satellite or cable TV networks.

IHA: Tell us about your shops & restaurants.

Harumi: In 1995, I began to operate my business “Yutori no Kukan,” managing shops and restaurants. The shops sell kitchen items, interior goods, aprons, and clothes that I have produced. At the restaurants, my original recipes are on the menu. Currently, I have 53 shops in major department stores across Japan and 12 cafés and restaurants (some of them are annexed to her shops) 1 deli in a large commercial facility.

You can find more information about Harumi and her shows, books and more at http://www.yutori.co.jp/en/.

You can find her English Cookbooks on her Amazon.com page.