Millennials are at the center of the niche of those who brew craft coffee at home.

That’s according to the new Craft Coffee Report from Port Washington, N.Y.-based NPD Group, and it is great news for retailers who stock those sort of specialty items and who also on the lookout for ways to attract millennial customers.

Craft coffee brewing is not your grandmother’s percolator, although it comes close. Craft coffee brewing uses pour-over cones, French presses and vacuum brewers, and nearly 11 percent of young adults in the United States over the age of 18 are skipping Dunkin Donuts and Starbucks (and the associated price tag for a cup of Joe) to stay home and, ahem, brew their own.

The new NPD report, developed with CivicScience, found that millennials are twice as likely as their boomer parents to use craft brewers at home. These younger consumers represent 44 percent of at-home craft coffee brewers and more than a third live in urban areas.

Consumers living in major cities have come under the spell of coffee shops and, it appears, won’t settle for sub-standard coffee, especially in their own kitchens. Craft brewing at home lets them make the coffee they like for less money and it also means saving counter space, important to those who have actually moved into their own apartments, especially in urban areas where any sort of space is tight. 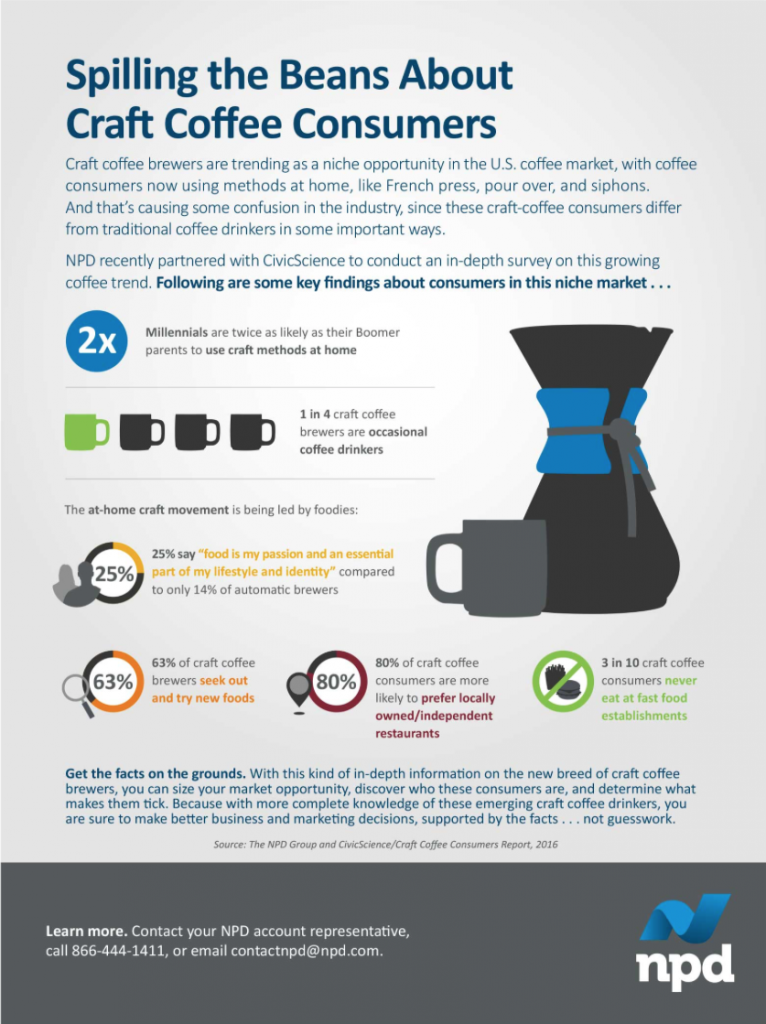 “Millennials, who are driven by creativity and the desire for personalization, are attracted to craft coffee brewing because of the skill and challenge involved,” says Joe Derochowski, home industry analyst at NPD. “Craft-coffee brewing enables them to participate in the experience of creating a perfect cup of coffee.”

The NPD study also finds that craft-coffee makers are social by nature and engaged in their surroundings. The report notes that the lifestyle, shopping and media consumption habits of craft-coffee aficionados mean they are more likely to work out at a gym, buy locally grown or organic food, donate to environmental causes and be engaged in politics.

“While sales of automatic coffee appliances have declined, in-home consumption of coffee has grown to a new normal compared with a decade ago,” says Derochowski, who adds that NPD is forecasting 9 percent growth in coffee consumption by 2024.

“The craft coffee movement, which was already embraced by the country’s largest generational group, millennials, is well-positioned to capitalize on future industry growth.”