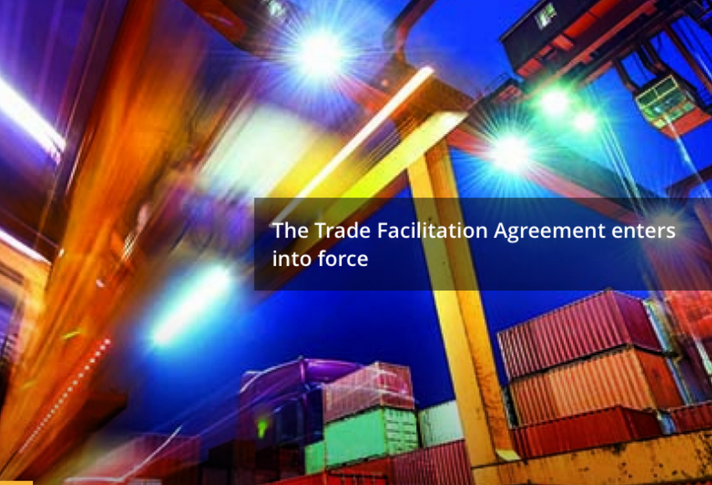 Bureaucratic delays and “red tape” pose a burden for moving goods across borders for traders. Trade facilitation – the simplification, modernization and harmonization of export and import processes – has therefore emerged as an important issue for the world trading system.

On February 22, the WTO announced that the historic Trade Facilitation Agreement (TFA) negotiated at the 2013 Bali Ministerial Conference had taken effect. The TFA contains provisions for expediting the movement, release and clearance of goods, including goods in transit. It also sets out measure for effective cooperation between customs and other appropriate authorities on trade facilitation and customs compliance issues.

WTO estimates show that the full implementation of the TFA could reduce trade costs by an average of 14.3% and boost global trade by up to $1 trillion per year, with the biggest gains in developing countries, which account for approximately two thirds of WTO members.

The TFA should help level the playing field, as the U.S. already implements most of the provisions that are outlined in the Agreement.  Not all the provisions are “requirements”, however, but merely suggestions and recommendations, and WTO members can determine their own implementation schedules based on their ability to comply.  However, at least there is movement at the WTO level on these important global trade issues.

Three Sections of the TFA

Section I contains provisions for expediting the movement, release and clearance of goods, including goods in transit. It clarifies and improves the relevant articles (V, VIII and X) of the General Agreement on Tariffs and Trade (GATT) 1994. It also sets out provisions for customs cooperation.

Section II contains special and differential treatment (SDT) provisions that allow developing and Least Developed Countries (LDC) Members to determine when they will implement individual provisions of the Agreement and to identify provisions that they will only be able to implement upon the receipt of technical assistance and support for capacity building.

Section III contains provisions that establish a permanent committee on trade facilitation at the WTO, require members to have a national committee to facilitate domestic coordination and implementation of the provisions of the Agreement. It also sets out a few final provisions.

The Organization for Economic Co-operation and Development (OECD) has developed a set of indicators to assess trade facilitation policies across the member countries.  Information on these indicators can be found at the OECD website.

The OECD also has a “Compare Your Country Tool” which can be used to assess potential countries of trade before attempting to enter trade with that country.

The TFA should reduce global trade costs by an average of 14.3%.  It will potentially reduce the time needed to import products by 1-1/2 days, and will reduce export times by 2 days.

Many exporters are taking a “wait and see” attitude as to the potential benefits of this implementation. As developing countries have a year to create a timeline for full compliance with TFA, we will know better in a year what the true implications will be for U.S. exporters.

For additional questions about the Trade Facilitation Agreement (TFA) or on International Trade, Customs and Export Law, visit Sandler, Travis and Rosenberg, P.A..