Michelle Hespe caught up with Anne and John Heng, after their New Zealand-based store, Taylor Road Homewares, became a Global Honoree at the Global Innovation Awards (gia) in Chicago. Organized by the International Housewares Association (IHA) during the International Home + Housewares Show, the awards have been running for thirteen years, and are considered the Oscars® of retailing in the home and housewares industry.

The Taylor Road to Success

It’s not every day that a retail store from a small country swoops in to score a Global Innovation Award, but Taylor Road Homewares from New Zealand did just that. The store was up against 22 national gia winners from Australia, Europe, Asia and the Americas, and it became one of five global honorees, chosen by a jury consisting of four retail/visual merchandising experts and seven editors and publishers of home and housewares trade publications from around the world.

Owners of Taylor Road Homewares, John and Anne Heng, have travelled a long, rewarding, and interesting road to arrive where they are today, as winners of a gia award, for a store established only three years ago. But it is their combined history and experience that has helped them to create a winner right from the start… 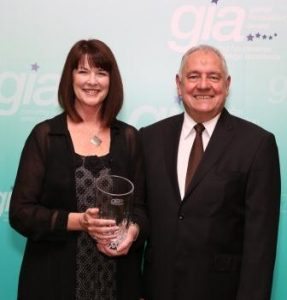 John and Anne moved from New Zealand to Australia in 1988, when John took on the role of Group CEO Asia Pacific as a part of a multinational housewares company. They lived in an idyllic village in the Blue Mountains near Sydney, and after seven years, the couple returned to New Zealand when John became the Group CEO for a New Zealand housewares company. That role lasted for 13 years and saw him travelling the world as the company expanded into Australia, the UK and the U.S., while developing an export market in over 50 countries.

John retired in 2008, but a year later, he and Anne decided to do something together. After all, they had met when Anne was the promotions manager for a large retail complex in Auckland, so they figured their combined skills could lead to something enjoyable and profitable. On the side, not ever completely retiring, John had started an export consultancy, so they were still in the retail loop.

The couple bought into a franchise in New Zealand that unbeknownst to them, was in financial difficulty and unfortunately went into receivership the following year. But as any great businessman knows, any failure presents opportunity, and John brought together three independent franchise stores, to form a company, buying some large shipments of goods previously destined for the defunct group. By default, he became an importer.

To continue trading, the new group took on the name Home-etc, but the name never really suited the couple’s dreams, and then in 2012, John and Anne bought out the other three partners, firmly putting themselves in the hot seat as masters of their own destiny.

The determined duo began brainstorming, decided they wanted a retail store of their own and knew the name had to be perfect to suit their style. They wanted to build something from the ground up, and the right name would give them the solid direction they needed. “It was our daughter Hannah who came up with the idea,” said Anne. “We had some of the happiest years of our lives living in Taylor Road, in the Blue Mountains, and we knew we wanted to make people visiting our store feel like they were being welcomed into a home and treated like a guest. So Hannah suggested calling it Taylor Road.”

A name had been bestowed, and so the first step on a new journey was made – Taylor Road Homewares was on its way to becoming a world-class store with a simple concept based upon the beauty, style and warmth of a wonderful home. 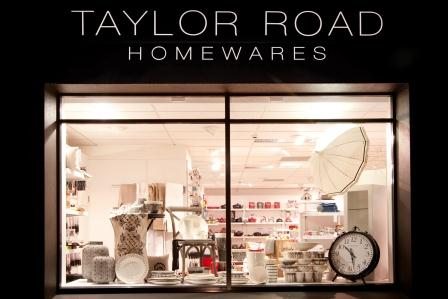 Taylor Road impressed the judges of gia, not only with their visual merchandising, careful use of lighting, moveable display units and tailored gift wrapping, but also with their innovative and highly efficient approach to business and in particular, their POS system. And that’s where John’s many years of experience leapt to the fore. “We were the first company in New Zealand to run a fully integrated cloud based Financial, POS and Website in linking Xero, Vend and Shopify,” he explained with pride.

In other words, the company’s client-base automatically talks to the POS system, integrating with their website, so orders are passed through an accounting system. Everything is simplified, quantified, recorded and archived. “In discussions with other national gia winners in Chicago, we were surprised that our fully integrated Cloud based approach to Financials, POS and website was unique,” John said.

The couple found that the application process for gia helped them put their business plan into a more succinct format, but it also made them realize they were certainly on the right track. “The strategy and business plan was already there – we just had to get it on to paper within 100 words!” said John. Anne laughed at the memory of it raining in New Zealand when they were trying to finish the renovation of the store and get impressive photographs for gia completed, but in the end, with a lot of determination and hard work, they got there, as they always have. “The lesson we’ve learnt since setting out is – if you know what you’re doing and where you’re going, it’s not difficult. It’s just goals you have to meet,” said John.

On the night of the gia gala dinner and awards ceremony in Chicago, the five global honorees were announced, and John and Anne were ‘completely gobsmacked’ when Taylor Road Homewares was announced after a drum roll and huge applause. “We were so in awe of some of the other stores that we were up against, we even felt a little embarrassed to be there at first!” said Anne. 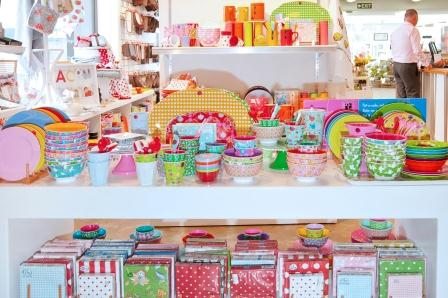 “Winning has been a major reinforcement to our plan, of delivering to our customers what they should expect from a great retail store,” said John. “We put the PR wheels in motion and have had some print publicity since our win in the U.S. We have also made everyone who visits our website or social media aware of our achievement and ran a celebration competition with a prize of six French champagne flutes – with the compulsory bottle of French bubbles to accompany them of course!” laughs John.

In retrospect, Anne and John admit that they thought, coming from such a small, remote location on the world map, that they didn’t stand a big chance of being a global winner. “But the recognition by your peers makes you realize that the effort you put in is duly rewarded” John said. “We also picked up five new suppliers on an exclusive basis, and I am sure that being a gia winner helped us with that!”

One thing is for sure. Taylor Road Homewares knows where it is going and what it is doing, every step of the way. “We will not lose sight of our most valuable asset,” said John. “And that is our customer. By bringing more exclusive lines to them, backed by the high level of service from our wonderful staff, we will ensure that we keep them, and attract more.”

John and Anne both paused to reflect, then John summed up their many discussions while entering gia. “Our advice to other retailers would be to remember that gia is not a once-a-year event to dress up your store and your act, but a living, working document of what you should be doing every day.”

For more information about the gia (Global Innovation Award) program, the co-sponsors, or participating in 2013-2014, contact Piritta Törrö at piritta.torro@inspiredconnection.fi. Additional information on the gia program is also available online at www.housewares.org/gia.

For more information about the International Home + Housewares Show and to pre-register for the 2014 Show, taking place in Chicago on March 15-18, 2014, please visit www.housewares.org.