2013 was a positive year for housewares exports as they grew 3.9% to nearly $4.3 billion. This is a record high! Almost all export markets expanded, though the pace was more moderate than that of the previous four years.

Houseware exports have now climbed 12.8% over the past two years. This is a testament to the commitment and tenacious effort of U.S. exporters and the recognition of U.S. housewares as well priced, quality goods by buyers abroad. 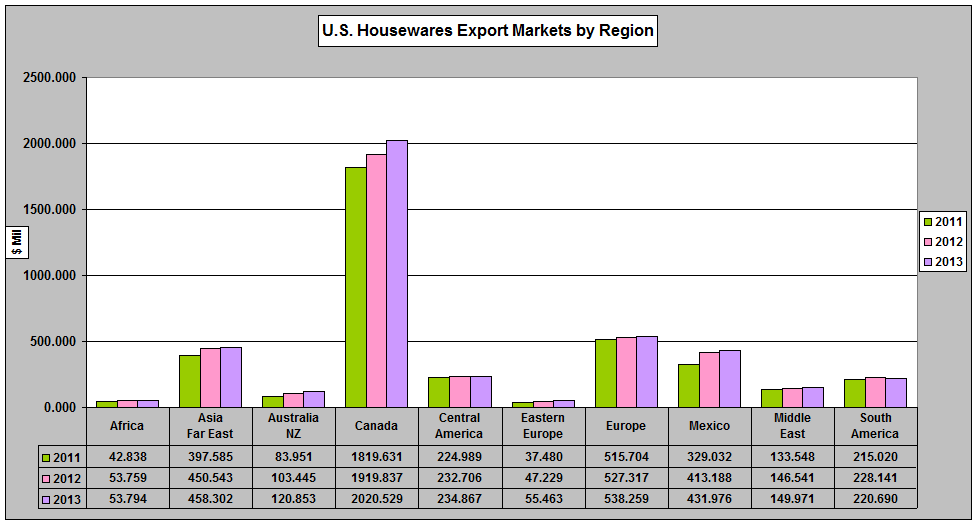 Source of Data: U.S. Dept. of Commerce, Bureau of the Census

The export performance by product category was also positive except for a small decrease in tabletop in 2013.

The table below shows the percentage change by category for both the one and two-year time periods.

In recent years there has been a proliferation of new global buyers and new markets that demonstrate their desires for U.S. housewares across all product categories. Producers paid attention to these trends and took the time to invest, innovate and put forth creative product lines to attract and satisfy any taste, generation, social and economic strata, living environment and preferred channel of distribution. This is a very exciting time for housewares’ suppliers and consumers.

Future postings will give more details about the top country markets and what’s selling in each. Good selling!